It’s time to pick your winners/losers. 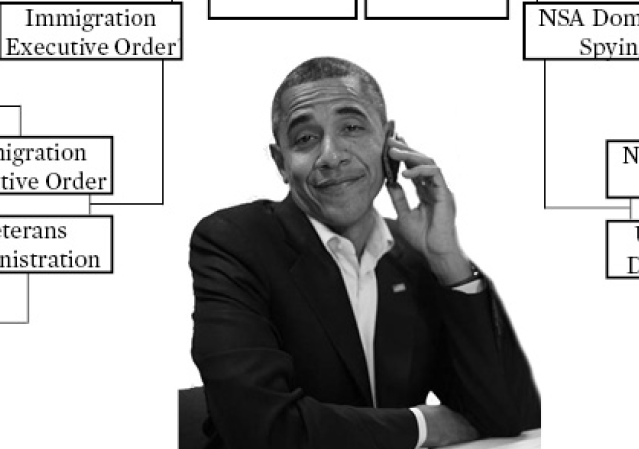 President Barack Obama’s administration has been one rife with scandals. Some pertain directly to the President himself and his own actions–like the recent immigration executive order that some say unconstitutionally side-stepped Congress–and some to members of his administration, like the targeting of conservative groups by the IRS and the Secret Service’s series of embarrassments.

So in the spirit of March Madness and NCAA bracketology, I crafted an Obama Administration Scandal Bracket, originally published at The Cornell Review. 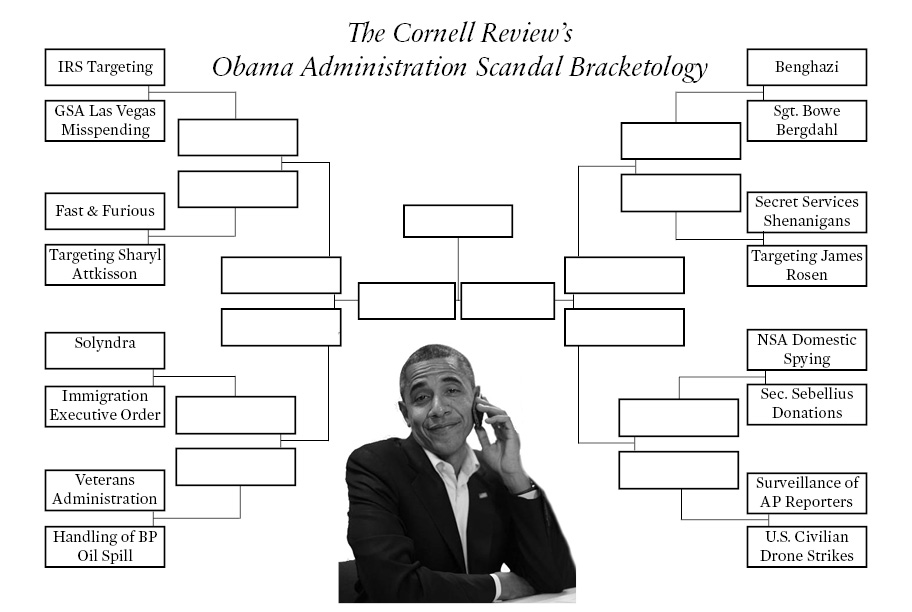 Allow me to explain a few points:

Readers who disagree with my bracketology methodology are free to argue otherwise. 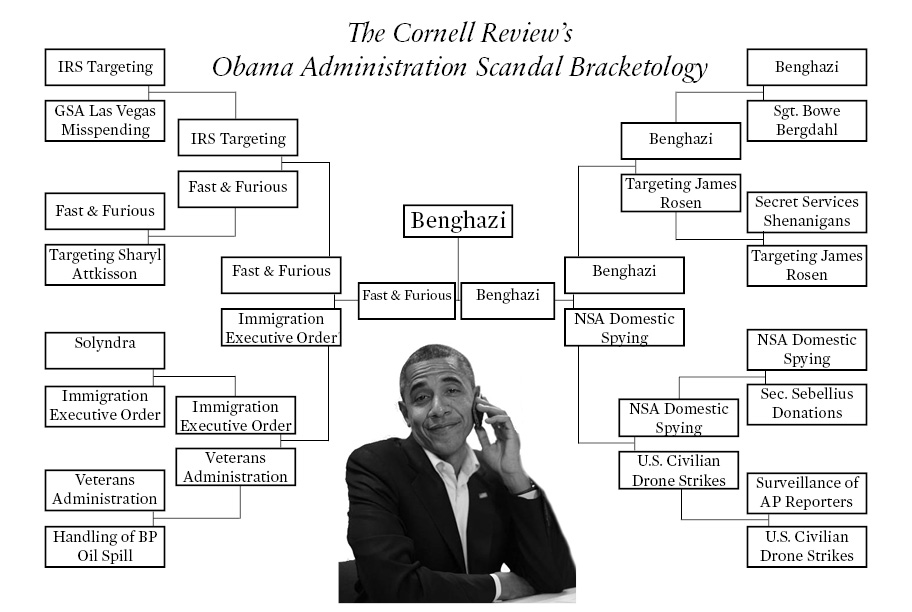 Obama got away with what Nixon attempted to do and was force to resign the Presidency for.

Nixon wasn’t a black messiah. My, how times have changed …

People, an American died because of Fast & Furious. His name was Brian Terry. Have we all forgotten?

Four Americans died at Benghazi. Their names were Christopher Stevens, Sean Smith, Tyrone Woods, and Glen Doherty. Have we all forgotten?

Yes, IRS targeting is an Orwellian scandal, but it does not compare in the slightest when deaths of Americans are involved.

“I was on the fence about “If you like your doctor…” because, while certainly deceitful, there were no direct cover-ups, lives directly endangered, direct personal gain or cronyism/nepotism, laws broken, or enormous ethical lapses…”

1. Obamacare is a direct cover-up.

2. Jonathan Gruber is a cover-up.

3. People who had their treatment disrupted because their policies were cancelled were directly endangered.

4. The newly hired bureaucracies and IRS employees to enforce Obamacare compliance did gained from this.

5. Ben Nelson’s “Cornhusker Kickback” and Landrieu’s $300 million “Louisiana Purchase” for a vote on Obamacare is an ethical lapse.

GruberGate could have gone on the bracket, you’re right.

Haven’t heard about your #5, but I guess, as you said, Obamacare could have its own bracket. Perhaps come next year there will be enough “contestants” to make one.

How do you do this? Which one of the two is more important, will attract more attention?

I think IRS targeting beats Fast and Furious, and in fact, targeting Sharyl Attkisson beats Fast and Furious. That is because, at the upper levels of government, Fast and Furious is a policy blunder and incompetence more than a scandal. It probably does represent corruption, but at a lower, civil service, level. There are some elements of cover-up, but I think targeting of individuals beats that, and that was covered up too, and more obviously.

Immigration Executive Order (actually not precisely an executibve order) is a policy disagreement, and possibly alkso astretching of the law. It is not a scandal, unless non-enforcement of mariijuana laws in states which have legalized it, also is, or non-enforcement of EPA ethanol rules. Only about 30% of the public really opposes the policy. Don’t kid yourself beczuse you’re in an echo chamber. Yes, 70% or more opposes doing this without legislation, but that’s not the same thing.

Some of the things on the right side of the bracket aren’t really scandals. Benghazi isn’t even a scandal, except as a very important, continuing, misjudgement. There are some scandal elements, mainly involving other people than the president, whose most guilty of tolerating incompetence or treason. (people helping enemies of the United States) Obama did some lying about this but no more than about Obamacare.

Because Benghazi is so important, and because it is a definite scandal as far as Hillary and people in the CIA are concerned – I would rate Benghazi winning over IRS targeting, if it can be clarified. If it not clarified, then IRS scandals.

In fact, when it comes to the art about e-mail deletion, and not maintaining government records they are the same scandal!

Reminds me of the Clinton Bracket of 1998. Boy that was a Final Four to remember! I still recall how BOMBING THE ASPIRIN FACTOR beat CHINESE ESPIONAGE scandal for the championship.

Busted my bracket when the WACO SEIGE lost out to the WAG THE DOG BOMBING OF YUGOSLAVIA in the Sweet Sixteen.

During the so-called ‘government shutdown’, the executive branch installed Barrycades in front of the open-air World War II Memorial in D.C., and hired a security force, which prevented veterans from visiting their memorial.

And the administration allowed, through inaction, a Marine to languish inside a Mexican prison for 8 months.

Finally, the administration did not inform communities (or the press) where all the unaccompanied alien children would be resettled.

These are my bracket additions.

Many people have been documenting Obama’s lawlessness.

This is the most brazenly corrupt administration ever.

The Waco siege may come back.

It ties into the Vincent Foster case (via waiting to fire the FBI Director till after it was over – it took some three months later because they were trying to get William Sessions to voluntarily quit – his failure to leave voluntarily probably terrified Vincent Foster, especially after he – I think – read the email message I sent July 19, 1993, routed through Rochester, to [email protected] which would only have arrived and been printed out the next day and forwarded to him because it dealt with Crown Heights and Governor Mario Cuomo was keeping secret the contents of the Girgente Report until it was released, and tghey were afraid of what it might say about Al Sharpton, Bill Lynch and others) and the Vincent Foster case ties into Benghazi. (in the person of Foster’s probable killer, or supervisor of the killer, Arabian Ambassador to the United States Prince Bandar bin Sultan 1983-2005, who also headed Saudi intelligence in 2012 – he has since been purged, and lost all his remaining positions with the death of King Abdullah.

This is the smoking gun in the Vincent Foster case:

http://i58.tinypic.com/ih8nx3.jpg (top of page 10 of the MArch 14, 1994 New republic, which reveals a secret unscheduled meeting between Prince Bandar, President Clinton and Sandy Burglar, accompanied by an explanation that is unlikely to be true, paired with a warning not to make to make too many generalizations base don that explanation that was published at the time of several known Foster case leaks. It should be notd that Prince Bandar’s residence, where many secret meetings were held, was across the street from Fort Marcy Park, where Vincent Foster’s body was found, and that there guns and locked briefcases, in his residnece – briefcases he claimed contained secret files but more likely contained cash.)

Waco also ties into Interpol protecting the Argentine government from accusations that it tried to cover up the Iranian role in the destruction of the Asociación Mutual Israelita Argentina building in Buenos Aires in 1994. (through the person of Ron Noble, chief of Interpol 2000-2014, who headed the “Waco Administrative Review Team” which produced the Treasury Department report on the ATF’s actions against the Branch Davidians on February 28, 1993. Noble had been kept out of any involvement until after the fire most likely so he could be in charge of this report.)

Just curious, but does not the existence of a scandal bracket and winners/losers imply that one or more of them will, if not bring him down, at least harm him? And does that not imply that some individual or group will do something about him and his scandals?

1) who would that individual or group be?
2) what conceivable means would be used?
3) one can just as well assume, from the evidence available, that the scandals have been accepted by the American public as part and parcel of rule by the Left.