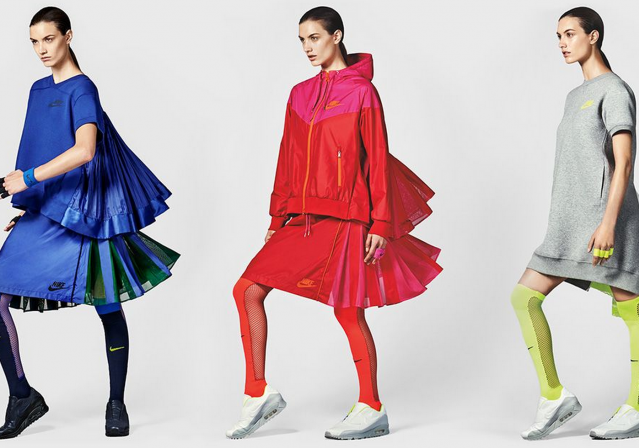 Nike’s latest fashion endeavor looks runway ready, and probably not meant for kickboxing, spinning, or anything else athletic. But then most runway fare isn’t designed for anything but the runway. Even the promo photos look like the glossy ads that fill Marie Claire and not typical adverts placed in weekly circulars. 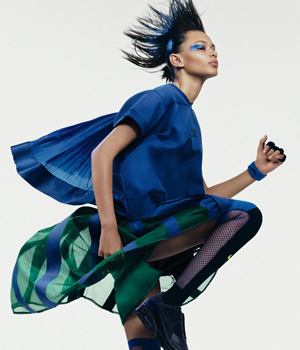 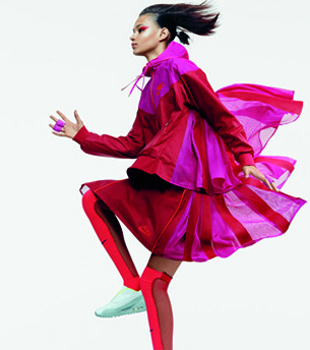 Which seems to be the point. Partnering with Japanese fashion studio Sacai, Nike hopes to make their mark in the rapidly expanding world of fitness fashion.

So Nike decides to create what is obviously a fashion couture line. No big deal, right? It shouldn’t be. Except that Nike committed the unforgivable sin of describing the line as feminine.

As described by Nike:

Renowned for her disruptive aesthetic, sacai’s founder Chitose Abe began the design journey by mining the Nike archives and pulling references from running, tennis and American football, reinterpreting Nike’s heritage sportswear silhouettes through a feminine and modern lens. The resulting eight-piece capsule collection seamlessly blends the iconic look of sport with a feminine and modern edge.

New fabric innovations include a special mesh lace hem that was specifically developed by Nike and Abe to adorn the trim of graphic Nike T-shirts. The detail pays homage to sacai’s cool and subversive take on femininity. Abe also applied her signature paneling to several of the garments. Through technical innovation, the partners were able to achieve this effect by pleating the classic ripstop fabric for the first time. Bonded zippers that are attached without any stitching are another example of advanced design.

Made with netting, lace, and pleats, Nike’s new line of dresses, skirts,  and jackets are in the most literal sense — overtly feminine. In the context of modern fashion, dresses are feminine. Skirts are feminine. Tights are feminine. None of this is even up for debate.

In this particular tale of faux outrage, the offended veer severely off course over the simple fact that they wouldn’t wear Nike’s new line. Granted, I wouldn’t purchase any of Nike’s latest offerings (though the fishnet leggings are pretty cute… I could probably rock those). But just because it’s ugly doesn’t mean it’s outrageous and offensive.

Slate’s Megan Wiegand writes, refuting her own point in the first sentence:

The Sacai collection is undoubtedly a vanity project for Nike, but its premise—that female athletes prize style and appearance over functionality and performance—is completely tone-deaf. Women and girls raised in a post–Title IX era continue to make strides in athletic participation—women, for example, accounted for 57 percent of running-event finishers in 2013. And we’re willing to drop the dollars for our workout clothes.

Did  I miss something? Did Nike, anywhere, at anytime, even remotely suggest women should not, cannot, or are in any other way incapable of “making strides in athletic participation?’ Yeah, I didn’t think so. But Nike made a skirt with lace so their sexism is implicit, or something…

Nike’s latest collaboration is just one of many design mashups that can be found in the Nike Lab. Items in the Sacai collection range in price from $150-$350. Clearly geared towards the casual jogger…

This is how the clothing line appears for purchase — a clear departure from the runway couture ads: 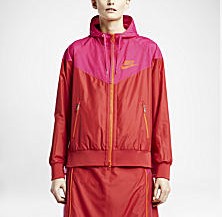 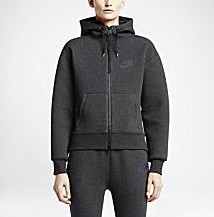 And yet… Logical contradictions, let me count the ways. Wiegand continues:

I’ve written before about how products for women often get reduced to “shrink it and pink it,” and this is yet another example of adding a traditional female element (pleats! lace!) and labeling it as “designed for women.” Sure, our closets are stocked with delicate tops and swishy skirts that we wear to work or out on the town. But just like our fellow male athletes, we want athletic gear that doesn’t chafe, sag, or stretch, that’s breathable and fitted, and that survives through countless spin cycles (and SoulCycles).

Correct me if I’m wrong, but in designing clothes for women, wouldn’t the designer want to add female elements? It’s not like Nike was designing an exclusive line for Diane Keaton (though I do admire her style). The only feminist objection then is that women don’t want to wear this line of clothing because pleats and lace, therefore, it’s offensive. There are many designers I’m not partial to and amazingly the solution is rather simple — I don’t purchase their clothing.

While the rest of the world simply giggles at the thought of jogging in a caped sweat shirt, feminists (or at least the writers at Slate, Business Insider, and about 5 chicks on Twitter), have found cause for outrage.

End the debate for good. Wear it to a Planet Fitness near you. 😉

If the left keeps pushing this sort of stuff all their women would look like Elizabeth Warren.

That stuff looks ugly enough to have been designed by Kanye West.

Who would actually wear that stuff while working out? Seriously? What’s wrong with a pair of shorts and a T-shirt?

Nike doesn’t buy those from a Chinese factory for 10 bucks and sell them to the retailer for 200 bucks.

From the pics at the very top, I have the red in Men’s 3XL and wear it jogging every day. Sure draws a lot of looks, I must say.

Hillary had a garage sale? LOL!!

There is not enough brain bleach in the world to comprehend that statement.

Extending this foolishness to sportswear is also stupid.

This is just an image that projects an aesthetic created by designer. This is not and is not expected to be sportswear.

As you’ve apparently managed to do your entire working life, you’re free to wear what you like. I don’t think anyone’s proposing making runway fashion mandatory. It’s just a bit of fun, and gets them lots of free column-inches.

If they had added an Indian element to the design, then these items would have been great for my Bollywood classes.

Not sure what you meant by that. Were you looking for the English word “cue” perhaps? The word “queue” does not make sense in the context in which you have used it. Not in English or in French.

Well, there could be lots of drama queens lining up to pile on. Maybe not idiomatic, but it has a certain kind of sense.

I’m sorry, but this is not feminine.

A cape for feminine sportswear…
but … but … but…
Wonderwoman doesn’t have a cape.

PS:
I think the 70’s “new Wonder Woman” comics she did often have a cape.
But I don’t think that feminists liked that Wonder Woman