“Israel has always been a bipartisan issue” 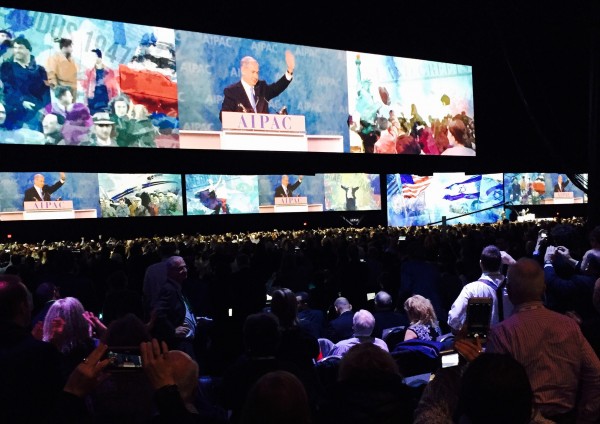 Yesterday, I felt like a stranger in an unholy land; embedding yourself inside an anti-Israel (and I would argue anti-Jew, for the most part) rally will do that to you.

Today, I feel like a guest welcomed into friendly territory and invited to stand on the front lines of a battle whose narrative has devolved from worldwide security crisis into petty political spat.

There are no protesters inside the building today, but the tension in the room couldn’t be avoided if the AIPAC conference were held on an otherwise-deserted island. Israel is in danger, and the manifest theme of survival—as opposed to gaining control of a narrative, like we see at conferences like CPAC—is at the forefront of the minds of panelists and attendees (even if they’d much rather it not be.)

Survival as a theme and purpose. It’s just unreal. I can’t relate. #AIPAC2015

Maybe that’s why @barackobama is so eager to discount this danger. It’s always been *fine* for those who surround him. #AIPAC2015

UN Ambassador Samantha Power’s time on stage served as a perfect example of why Israeli Prime Minister Benjamin Netanyahu dragged all the way over here from Israel to address a joint session of Congress. Obama’s pending deal with the Iranians over the future of their nuclear program has the world on edge, and claims that the U.S. and Israel have the same desire to eliminate Iran’s nuclear capabilities fell flat.

Power could have announced a plan to solve the crisis in the Middle East by noon tomorrow and it wouldn’t have made a difference in the eyes of the attendees I was able to talk to, not because of the overall difficulties in solving that particular problem, but because they don’t believe a word this Administration has to say.

This feels like a carefully curated bullet point defense. Talk to me, #AIPAC2015 — do you believe her?

Neither does the Prime Minister.

Netanyahu spent a great deal of time at the beginning of his speech talking up the history and importance of the U.S.-Israel alliance, but his tone hinted at a much darker reality.

“Israel never forgets its friends.” We endeavor to deserve that. #AIPAC2015

Feels like everyone is waiting for the caveat. #AIPAC2015

“Israel has always been a bipartisan issue.” You awake, @thedemocrats? #AIPAC2015

“In our part of the world, no one makes alliances with the weak,” Netanyahu said as the crowd settled back in after another standing ovation. Barack Obama could use the exact same words to describe the current fight over Israel, and no one would believe him. Love him or hate him, Benjamin Netanyahu commands the narrative specifically because the Netanyahu Doctrine (another discussion for another post) isn’t rooted in a deeply-ingrained tendency to run screaming from conflict the moment enemies of the free world start to complain.

Czech Republic President Miloš Zeman spent a lot of time today talking about the historic relationship between the U.S. and the European and Middle Eastern Jewry. “Ich bin ein Berliner” may have served JFK well, but it developed into a state of mind that endures even as we see the current U.S. president behaving in ways that reveal his commitment to fatal compromise.

Zeman’s declaration that, “Now we must all say, ‘I am a Jew,’” was met with a standing ovation. These people understand the danger in leaving the fate of an entire nation in the hands of diplomats and politicians who are willing to trade security for appeasement.

The Leader of the Free World©, on the other hand, remains woefully ignorant of it.

Leaders the truth win while those claiming to lead by following liars are really just cowards. Enough said?!

Good coverage of both yesterday’s rally and today’s speeches. Thanks!

It wont matter who wins the narrative if Tel-Aviv is nuked.
And, no amount of US aid will keep Israel from retaliating.

It is not just Israel’s survival that is at stake, here, it is our own souls.

I was raised Catholic, and I was taught that standing by and allowing others to harm the innocent is a sin. If you know what is happening, and you have the power to avert the harm, then your sin is equal to that of the perpetrators. Moral laws for individuals do not apply directly to nations, but it is clear that we have some duty to protect ourselves and our allies.

We can argue about what is the best way to safeguard ourselves and the world.

I strongly suspect that Barack Obama believes that the United States must eventually step down from its premier position in the world, and let various regional powers, such as Russia, Iran, and China, shoulder more of the burden of world governance. I agree, but I see no sign that any of these entities is remotely worthy of that kind of power.

I do not think the world is ready, just yet, for Pax Americana to end. I don’t think that encouraging the rise of, and nuclear empowerment of, yet another failed tyranny will make the world or our country safer or happier. I would remind those who are considering it that the end of Pax Romana led to widespread death, destruction, and loss.

Netanyahu spoke truth to power as opposed to mots de l’apaisement de Kerryland. Israel will NOT “Lean Forward” is what I heard Netanyahu say.

There is no need to stroke the savage egos of the Progressive IgnoreLords.