“Hillary Clinton’s system was designed to defy the Freedom of Information Act requests.” 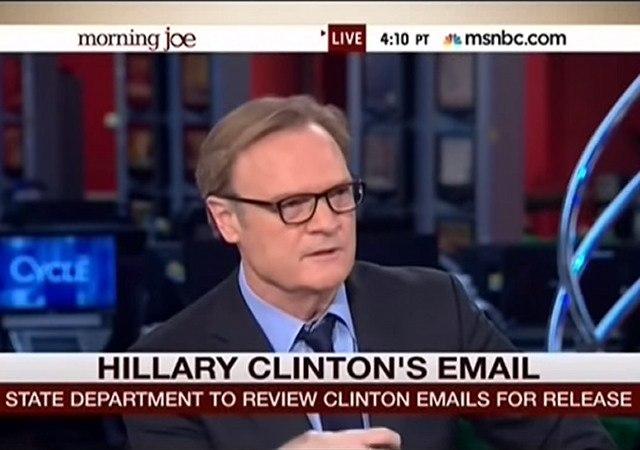 Many people in media have been critical of Hillary Clinton’s use of a private email server while serving at State, but Lawrence O’Donnell? When Hillary has lost MSNBC…

Daniel Bassali of the Washington Free Beacon has the story:

Questions have arisen following reports Hillary Clinton had used a personal email account to conduct official State Department business as Secretary of State, and that the server she used was registered to her home in New York.

Prior to launching the “Right to Rise” PAC, former Florida Gov. Jeb Bush released hundreds of his emails from his time in the state house.

Clinton has been constantly compared to Bush’s decision. MSNBC’s Lawrence O’Donnell said he does not even believe that Clinton’s intentions in using a private server were pure.

There have been some new developments in this story that are worth mentioning. According to Edward-Isaac Dovere of Politico, the Obama administration has known about this issue since August:

The White House, State Department and Hillary Clinton’s personal office knew in August that House Republicans had received information showing that the former secretary of state conducted official government business through her private email account — and Clinton’s staff made the decision to keep quiet.

Sources familiar with the discussions say key people in the Obama administration and on Clinton’s staff were aware that the revelation could be explosive for the all-but-announced candidate for president. But those involved deferred to Clinton’s aides, and they decided not to respond.

In the end, Clinton’s staff waited six months — until after the New York Times published a story on Tuesday about the email account and the possibility that it hampered public access to official records — to begin their response.

Kelley Beaucar Vlahos of FOX News spoke to some IT experts who have raised security concerns:

‘How secure could it have been?’ IT crowd questions if Hillary email could have been targeted

Then-Secretary of State Hillary Clinton, by using her own email address and server for official business, was not only skirting government guidelines but taking serious cybersecurity risks as well, IT professionals tell FoxNews.com.

While secretary, Clinton was using her own private clintonemail.com domain, as well as doing government work on personal email.

IT consultant Bruce Webster, who has been digging into the mystery of the private Clinton emails, says that while government servers are certainly vulnerable, they still have highly maintained controls and 24-7 monitoring for potential breaches.

He said Clinton’s emails would have been less protected than if they went through the State Department networks.

“The most secure way would have been to actually use the State.gov servers,” he told FoxNews.com. “[The government] takes security very seriously. They have whole platoons of people dedicated to ensuring their servers aren’t hacked.

“If she has a private server running somewhere and she was doing everything on it, the question is, how secure could it have been?”

Well, Hillary can’t just stand still. That wouldn’t be progressive. She had to top her exploit of hiding the Rose Law Firm records from subpoena in the White House. What to do? Eureka! A super-secret server, completely immune to the FOIA decoder ring. Only she, the Shadow, and all foreign intelligence services will know what wisdom went into and out of that secret server.

The questionSSSSS of what would have happened if the old crook had croaked in office abound, and I haven’t heard anyone BEGIN to address them.

Clearly, Hillary knew of those FOIA requests from Judicial Watch and clearly Hillary allowed her email server to be a successful firewall allowing her to deny those requests by claiming there was no email trail to be found.

Her political career is over.

MSNBC wants Lizzie. She’s as vapid as Obama so she has a real shot at the gold ring.

Exactly … Hillary isn’t nearly “left enough” for the fashion-conscious, tampon earring network. Time for Lieawatha to come riding to the rescue on a Cherokee pony.

A lot of people are missing the major factor of this.

When the IRS tried to feed the bullshit line of a ‘hard drive crash’ causing Lois Lerner’s emails to be lost, anybody with even basic IT understanding just sat with their mouths open at so stupid a lie. Emails are not stored on a hard drive. Especially for government, every email is stored on the servers and is recoverable.

Clinton not only used a private email, she had a private SERVER set up, under her total control.

Meaning that as long as the IT guy set it up properly (as in when you delete something it not only deletes it but overwrites it with other data, permanently erasing it), Clinton had the power to actually, permanently delete anything she chose.

Anything Clinton doesn’t want us to see in that email, we will never see. THAT is the true deception going on here.

I agree with everything you say, but those emails were sent to others’ servers and those are not private. Those emails are being stored on the host server and are still available.

I agree with everything you say, but those emails were sent to others’ servers and those are not private.

Hmm, one private network, connecting to another for privacy, nah, could never happen

So you believe everyone she emailed had their own private server? That is stretching things more than a bit. One of the people emailing her used an AOL account. Hardly a private server.

Sigh. I agree with your sentiment, but your technical information is not accurate.

“Emails are not stored on a hard drive.”

Emails are, in fact, stored on hard drives, whether they’re on “servers” or not. There isn’t another practical read/write media to store primary copies on. But the notion that a hard drive crash rendered every one of them and backups unreadable is ridiculous.

This isn’t a configuration/set-up issue and emails aren’t stored in individual files that can be secure-deleted. On corporate enterprise back ends, whether they’re Exchange-based on BES-based (Clinton has a BB) or whatever, emails are archived in bulk in whatever proprietary data format the platform uses. You can securely prune those without an overwriting delete. Again, your sentiment is fair, but you should leave out the technical arguments because your luke-warm understanding of technology dilutes your point.

Ignoring everything else, Hillary as president is an unbelievable liability now. Who had access? Huma? Anyone else? Dollars to donuts Iran has every single email she sent while SoS.

Iran has amateurs. The Russians are regarded as the world’s top class, not so much because Russia is so great but because of their constant, broad-based efforts over decades and centuries, so such a deep level of investment (keep in mind Putin himself rose from the KGB so appreciates the importance more than most) pays dividends down the road.

So, Russia probably hacked this years ago. That’s not to say they couldn’t have hacked State Dept. stuff, but a private server is begging for trouble. I’ve said it before to people: Hillary was more concerned about Judicial Watch or Obama admin dirty tricks to sabotage her than anything Russia’s willing to throw at her. And since she’s currently the most likely next president of the US, Russia’s not going to do a thing. She’s concerned about domestic enemies, not foreign.

O’Donnell will find some ridiculous story to use as cover for his mea culpa to Hiliary in about a week.

O’Donnell is so odious I can’t even bring myself to watch the clip.

We are paying any attention to anything O’donnell says about anything? I’ll be right there with you after he goes after a few of the more egregious FOIA offenders and admits that it is most likely Hillary Clinton broke no law.