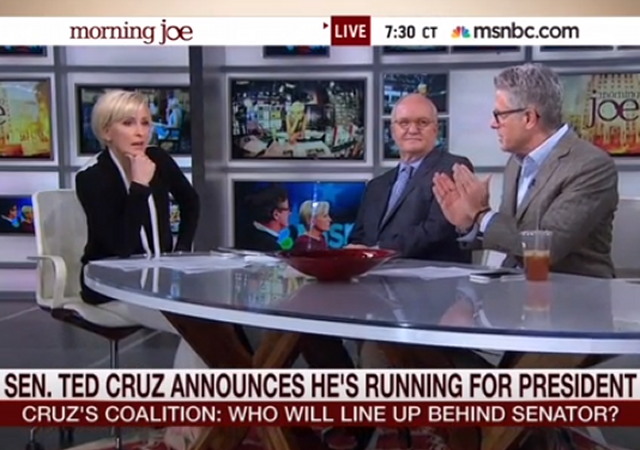 As you can probably imagine, Ted Cruz’s announcement about his plans to run for president in 2016 brought out a whole new level of crazy from liberals in media and most of it was very ugly.

The fine folks at Newsbusters have done a tremendous job chronicling the MSM reaction in words and video. Here are a few choice examples.

Appearing on MSNBC’s Morning Joe on Monday, Donny Deutsch viciously attacked Senator Ted Cruz (R-TX) following his announcement that he will be running for president, calling the Tea Party favorite “scary” and “dangerous.”

After co-host Mika Brzezinski asked Erica Grieder of Texas Monthly about Cruz’s presidential prospects, Deutsch tore into the Republican senator and declared him “completely unelectable, obviously an interesting character and obviously he’ll have a place at the table but unelectable for a host of reasons.”

On Monday’s NBC Today, while discussing Senator Ted Cruz’s announcement of his presidential candidacy, co-host Savannah Guthrie described the Texas Republican as “whip smart, a real conservative firebrand, knows how to throw those rhetorical bombs that the base loves.”

On Day Cruz Announces for President, Hardball’s Matthews Spends Much of Program Blasting Him As Latter-Day ‘McCarthy’

Chris Matthews was back at the helm of Hardball today after a week’s vacation, and, fortuitously for him, the very same day his bête noire, Ted Cruz, announced for president before a supportive crowd at Liberty University. From start to finish, Matthews did not disappoint his audience, spewing out hateful invective about the junior senator from Texas, rehashing his tired talking points comparing Cruz to Joe McCarthy.

Of course, this is just a preview of how every Republican candidate for 2016 will be treated by the liberal media—with the possible exception of Jeb Bush, who will be described as the only reasonable and likable Republican in the field right up until he gets the nomination.

After that, the claws will come out for him too.

We’ve all seen this movie before.

Democrats – or more probably people who want to or work in campaigns – try to demolish all Republicans except the one they have made plans to run against, even though the ones they are attacking could be easier to beat!

They don’t want to waste all that negative research, those campaign outlines – they’d have to do them all over again or something.

Better to stick with the long range plan.

And they don’t believe in their own candidate.

Just curious, Chrissy, since you quoted Cruz as saying that Harvard Law School faculty has more self declared Communists than it has registered Republicans – was that actually incorrect?

When it comes to elections for the U.S. Senate, the Democrats have more sense.

Chrissy … that leg is still tingling I see. Are you still thrilled with your black messiah, or is that early onset of Parkinsons?

The good news is that Cruz got coverage in the headline spaces up at Drudge. It was a 30 minute speech. And, lots of people watched this. Totally bypassing TV.

Harvahd’s main problem is that too many people know that that is where obama went for his sheepskin. You’re probably better off graduating from Stanford. Or even Berkeley.

You know, a long time ago I read most Americans don’t even pay attention to presidential politics … during presidential election years … until after Labor Day.

Meanwhile, Sarah Palin has proved you can make a life for yourself outside of the mainstream media. Heck, Sarah has a bus. And, when she travels around on it … crowds form when she’s parked. If Ted’s lucky it will always be the same. People will come. His speech at Liberty attracted more people to him than were just sitting in the audience.

Oh, and he did it without a teleprompter.

If bloggers and media outlets didn’t report on what MSNBC says, would anyone even know it exists? If this practice stopped, would MSNBC just disappear? This is the last live broadcast I saw on MSNBC in 2004: http://www.bing.com/videos/search?q=zeke+miller's+speech+to+republican+convention&FORM=VIRE7#view=detail&mid=392F1F394FF2D43E846E392F1F394FF2D43E846E