Tannerite claims NBC used video of adulterated product so as to show flames for news story. 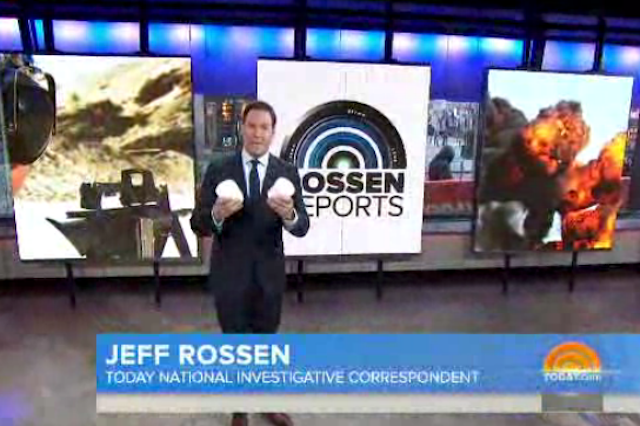 Is NBC up to its old—and I do mean old—tricks?

Way back in the early 1990s the network’s “Dateline NBC” program ran a “news” story claiming that certain General Motors pickup trucks would explode in flames when involved in an accident.

They demonstrated this propensity to their viewers by filming a controlled crash involving one of the GM trucks in question. Sure enough: kaboom! and fire!

The kabooming and fire were helped along by NBC’s surreptitious placement of incendiary devices hidden inside the vehicle.

In February of 1993 the show’s hosts, Jane Pauly and Stone Phillips, would be forced to deliver a humiliating three and a half minute on-air apology to GM, as the network agreed to pay GM to settle a suit brought against NBC over the story. (LA Times: “NBC Admits It Rigged Crash, Settles GM Suit).

Now claims are being made that NBC is using a similar dirty trick once again to falsely dramatize another explosive “news” story, this time on a different “news” show, the Today Show, and by a different “news” reporter, Jeff Rossen.

In a story being covered aggressively by Bob Owens at Bearing Arms (see here, here, and here), Rossen has chosen to illustrate an NBC “news” piece about a lawful explosive material using videos of explosions that appear considerably augmented, in a possible echo of how NBC admittedly augmented the GM truck explosions.

In the GM case NBC confessed to rigging the actual truck explosion themselves.  Here it appears that NBC is using misleading videos made by others who exploded Tannerite that NBC knew , or should have known, had been adulterated contrary to Tannerite warnings.

The substance that is the focus of the report is Tannerite, which is the most popular brand of a number of essentially similar lawful explosives—indeed, Tannerite is so much the market leader that it’s name is often used to generically refer to the entire set of similar products, regardless of actual source of manufacture (and I’ll do so for purposes of this post).

Tannerite is commonly used in long-distance marksmanship activities. Sold as a set of two different compounds, each of which is perfectly inert on its own, it forms an explosive substance when mixed.

That said, exploding it takes some real work. It won’t go off merely if it’s dropped, smashed, or even subject to fire. Rather, it takes an object moving at speeds in excess of 2,000 feet per second to detonate the mixture—in other words, a rifle bullet.

The utility of Tannerite to long-distance shooting is obvious. Distant, non-reactionary targets are difficult to see and score. The blam that results from a bullet strike provides immediate and incontestable evidence that the target has been struck.  Also, shooting exploding targets is just good, clean American fun.

Of particular interest here is the nature of the explosion that occurs when Tannerite is triggered. What’s produced is a concussive blast and a considerable amount of smoke. What is not produced is flame. Here are several typical Tannerite detonation (taken from a Tannerite promotional video):

Here, in contrast, are a few of the explosions used to illustrate the Today Show story on Tannerite:

Hey, look at that: suddenly there’s lots of flame.

How does one get lots of flame from a Tannerite explosion, when Tannerite doesn’t cause flame? By adulterating the Tannerite with stuff that does cause flame—a process that the company warns against, but which a quick Youtube search reveals is nevertheless frequently done by end users. (Indeed, it took only moments to see that roughly half of the Today Show “news “story on Tannerite consists of other people’s Youtube videos—that’s some hardcore investigative reporting there.)

Besides the flame issue, the Today Show misleads in other ways. A particularly emphasized part of their “news” story involved a woman who lost her hand after it was struck by shrapnel propelled by a Tannerite explosion.

Again, this injury resulted because of end-user stupidity contrary to Tannerite’s explicit warnings, not from any inherent danger of Tannerite.

Anything that produces a merely concussive expansion of gases when out in free space can indeed become a shrapnel-hurling danger when it is placed into a limited volume container. That’s why the company’s instructions limit the use of Tannerite to it’s own plastic containers designed and provided for the purpose of containing the material for purposes of detonation, in open space, with all persons at least 100 yards distant.

But the Today Show’s allegedly misleading “news” doesn’t end there. Rossen speaks in alarmed tones about the fact that the primary ingredient of Tannerite has been used by terrorists to kill Americans. Indeed, it has.

What could this terrible “ingredient” be? Dynamite? TNT? C4 plastic explosive?

Nope. It’s plant food.  Mere ammonium nitrate, perhaps the most ubiquitous mass produced fertilizer in the country, or for that matter the world.

Perhaps even more remarkable, Rossen uses as a political authority for the evils of Tannerite no other than Connecticut Senator Richard Blumenthal (Democrat), who during his run for that office publicly lied about having served in Vietnam. (Blumenthal served, but was never in Vietnam.)

Tannerite the company sees NBC’s alarmist coverage of their product as a potential existential threat to it’s successful business.  Accordingly, it filed suit against NBC for slander and libel only days after the Rossen news story ran on air.

Interestingly, the same day that Tannerite announced its suit, Bearing Arms noted that “news” reporter Rossen had made a most unusual tweet the day before his explosive “news” story ran: apparently he had pain killers “lined up” and was “plowing through pain” caused by a back injury as he finalized his Tannerite reporting:

Establishing an alibi? Is this perhaps a lesson taken from the downfall of another noted NBC “news” reporter, Brian Williams?

P.S.  Despite looking, I’ve found no public comment by NBC to the Tannerite suit. News stories being published as recently as last evening indicated that spokespeople for NBC had not returned their requests for comment.

Note: This post has been edited to more accurately reflect NBC’s possible misreporting of Tannerite and its products.

You mean the same NBC that altered 911 tapes and had to fire its nightly news anchor for lying? I’m shocked!

And they’ve once again lost half their viewship – that counts.

“Among the 25-to-54-year-old demographic that is the basis for advertising sales, the prime-time lineup lost nearly half its audience. Daytime isn’t much better.”

NBC – “Nothing But Commies”

OK, too late for this year, but THAT goes on the “must have” list for next year’s Enlightenment Hour, along with the steaks from specially bred extra-flatulent cattle…and single malt imported and transported to me via carbon-fueled vehicles.

Excellent (in the manner of Mr. Burns from the Simpsons).

On Tomorrow’s Rossen Reports – TV’s that Spontaneously Explode when tuned to FOX News!

Something else you might want to check on is if NBC followed proper procedures and got permission from the content creators of those youtube videos to use said videos on their show. I remember a while back a fellow I watch on youtube called Taofledermaus got in a bit of a dust up with NBC for using some of his footage for a show. I think his main issues were not being credited for his work as well as removal of watermarks from the videos which might be illegal. I’m just running off of memory here though so it might be better to talk to Tao himself.

He’s generally laid back and easy going, also quite responsive to comments on his videos so getting a response from him on this story shouldn’t be too hard.

Oh, one more thing. On tannerite, here’s a video from Taofledermaus where he is heating the stuff up in a test tube.

Not very dramatic was it?

Imagine combining some of that stuff with a whoopee cushion.

LOL, if someones butt can hit a whoopie cushion at 2000 fps then they have a whooooole different set of problems. 🙂

Or they’ve been eating one of Moochelle’s school lunches.

Did anyone see if Rossen has a valid perscription for those pain meds?

You and Mr. Owens have done a bang-up* job debunking this one, Mr. Branca! Thank you!

Bob gets all the credit. As usual, I’m merely standing on his shoulders on this story.

“What’s produced [when Tannerite is detonated] is a concussive blast and a considerable amount of smoke.”

I saw earlier that I left that out, added it back in. I think. Meant to. Haha, I better check, I guess.

But thanks, always appreciate help making sure I get things right. 🙂

How anyone can see NBC or any of its related agencies as a “news” agency or give any level of trust to them is beyond me.

I still wish George Zimmerman would appeal his suit.

I’m primarily a handgun gal, but it’s great fun watching my friends hit a canister of Tannerite. (Safety is top priority, so there’s never any funny business using it.)

What a load of crap. Tannerite is a great tool to use with long distance shots. I’ve used it several times for 1000 yd shots with an MRAD and you get a nice puff of smoke that tells you the target has been hit. No fireballs, no massive exposions.

NBC – the same company that misled the public by doctoring up Zimmerman tapes, lied again?

Give NBC a break. Sometimes the truth isn’t newsworthy, so what else do you expect them to do? Geez.

Yeah. “Fake, but accurate” is close enough for government work.

I know we covered this in J school…

Despite what Frankie Valli says, doesn’t “alibi” mean “elsewhere”? I don’t usually like to go full pedant, but I love to with lawyers.