A new Quinnipiac national poll shows that Republican and Republican-leaning voters may not be as committed to Bush partie trois as many conservative talking heads fear.

The poll, conducted from February 26 to March 2, shows that registered voters nationwide who also tend to vote Republican are taking a long look at what a Scott Walker presidency would look like. Walker’s 18% get in the poll beats fellow probable candidate Jeb Bush by 2%. Christie and Huckabee come in next at 8% each, with the rest of the field skidding in in the single digits. 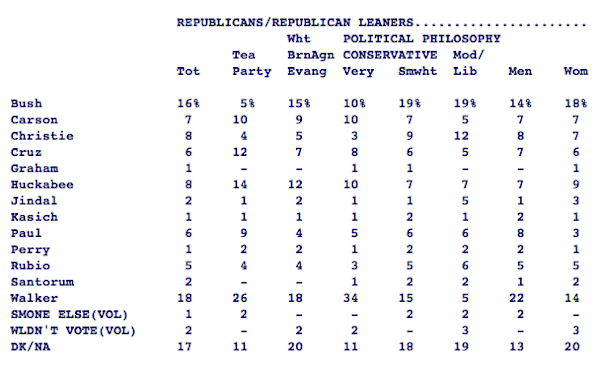 These results contrast sharply with the results of the recent CPAC straw poll, which saw Rand Paul winning handily over the rest of his colleagues; however, the straw poll—which was taken by around 3000 activists—also showed a surge in Walker’s numbers, so the two sets of data may not be that far apart in terms of an overall trend amongst voters.

The Democratic field looks…exactly as you would expect it to:

Former Secretary of State Hillary Clinton continues to be the top presidential pick for Democratic voters, who still favor Clinton five-to-one over Vice President Joe Biden and four-to-one over Sen. Elizabeth Warren. Biden has said he is considering a presidential run while Warren has all-but closed the door to a run, but continues to hold on to her progressive base of supporters.

Sen. Bernie Sanders, an Independent who caucuses with Democrats, gets a nod from 7% of Democratic voters, according to the poll.

And Clinton continues to lead all of her would-be Republican opponents, with Bush coming the closest with 42% to Clinton’s 45% in a hypothetical matchup. Clinton would beat Walker 48-39% according to the poll.

Clinton v. Walker is still a long way away (if that’s what Republican primary voters decide they want in 2016), but the opportunity for messaging to those who either haven’t formed an opinion, or who know they just want something different, is already upon us.

What happens when we ask voters nationally whether they’re interested in more of the same? Look at this:

Votes. Votes, votes, and more votes, already up for grabs.

The only group that claims it isn’t looking for the “new car smell” candidate? Dems, of course—but look at everyone else. Men. Women. Millennials. It’s like Christmas for comms wonks!

That’s the number we should be focusing on; while it doesn’t tell us specifically what these voters think is wrong with the Obama era, it does give us an opportunity to search out and destroy candidates and policies that are too closely entwined with the current Administration.

It’s going to take a lot of work, and a lot more precision than many activists are used to using, but it can be done. Hillary’s polling numbers tell us that it must be done.

The thing here is, Walker has fought the democrats before, and won. We need a fighter, regardless of whether or not he is the most conservative person in the race or not, whoever we pick must be willing and able to fight in what is probably going to be the ugliest presidential election we have seen yet.

94% of Republicans say they want to “change direction” yet voted for a whole slate of candidates who just voted to “continue policies”. While Republicans have no clue what direction they want to go, they did manage to elect the right people to help lead them there.

As for the GOP, it may keep the name, but within 10 years it will have been taken over by a mix of existing conservatives and emerging liberatarians. The current GOP leadership has proved itself incapable of adapting to survive – nor are they configured to survive by natural selection.