Krauthammer on Hillary: It’s the 1990’s All Over Again

Krauthammer on Hillary: It’s the 1990’s All Over Again

“She is determined never to let things out of her control.” 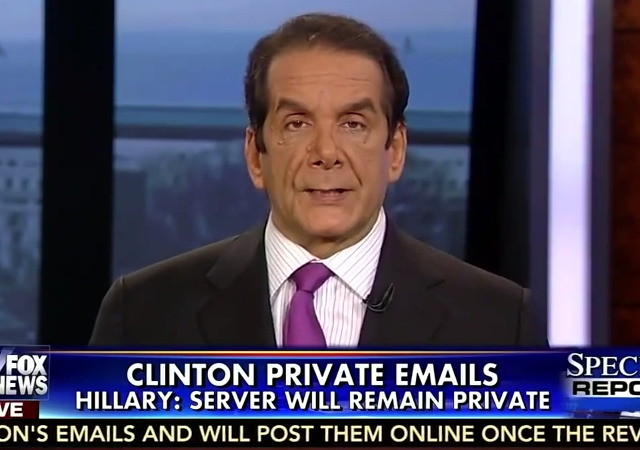 Hillary’s email scandal is a flashback for anyone who remembers the Bill Clinton years.

Democrats have put all their eggs in one basket for Hillary in 2016 but as Charles Krauthammer observed on Special Report last night, it’s like America has stepped into a time machine.

Krauthammer’s Take: ‘It’s the 90s All Over Again’

Charles Krauthammer said Hillary Clinton’s press conference about her exclusive use of a private e-mail account and server made it seem as if, “it’s the 1990s all over again.” He said he thinks Clinton chose to exercise total control over her communications because of President Clinton’s handling of the Whitewater scandal in the 1990s.

“She is determined never to let things out of her control,” Krauthammer said on Special Report. “This is going to be stonewalling from here until Election Day.”

This entire episode is a reminder that the Clintons come with baggage, but don’t take my word for it.

New scandals and reasons to wonder if Hillary is hiding something

The Hillary Clinton e-mail controversy is a reminder of one inescapable fact: She comes with baggage. Not the kind that fits in the overhead bin, either. I’m talking steamer trunks.

How could anyone serve four years as secretary of state with no official e-mail account, instead conducting business from a private address with its own domain and server? The answer is: Deliberately.

The only reason for Clinton to go through the trouble of setting up this system — rather than just call the State Department’s version of the IT help desk — would be to ensure that nobody got to rummage freely through her communications, personal or official. She must have wanted to be able to decide which e-mails would become part of the historical record and which wouldn’t.

Hillary Clinton has done America a great service by reminding people what a scandal ridden disaster she and Bill are.
#HillaryEmail

If I was a Democrat with any name recognition and higher aspirations, I'd be forming a presidential campaign right now. Hillary is toast.

Palin shows how multi-tasking gets done!

It is earlier than the nineties: Hillary’s Presser definitely had a Checker’s Quality to it

And don’t forget to tweet #ArkansasUnderwood as noted by Professor Jacobson, it is starting to trend!

My bro-in-law, who makes occasional crazy predictions that often come true, says that Hillary will announce in May or June that she will not be running – and here’s the seemingly crazy part – then John Kerry, who served in Viet Nam, by the way, will resign as Secretary of Chaos to run for the Democrat Party nomination for president.

No crazier than events that transpire every day in DC.

It would be much better if all of this were focused on later in the cycle after the democrats are completely committed to Hillary. As it is now they (in conjunction with the pliant media) still have time to create an image of a savior who can walk across clean, clear water (thanks to EPA water standard regulations) wearing high heels while she feeds the multitudes with free food someone else grew.

All destroying Hillary at this stage will do give Elizabeth Warren a good chance of becoming President.

I give Princess Running Bare a 15-30% chance of being president.

Americans are VERY tired of this crap, and don’t want it extended. Even a lot of Collectivist voters would just sit this one out if Warren were the nominee.

On Monday, Mark Belling (in for Rush) was expounding on the impending disaster in the Democrat party – they have NOBODY other than Hillary who is a viable presidential candidate. There are only 18 democrat governors in the entire U.S.. Jerry Brown, anybody? Andrew Cuomo? Terry McAuliffe? Where is the next generation of democrat contenders going to come from?

The few, the old, the Democrat Presidential hopefuls.

Obama was never a Gov. Look for someone else try to make the jump from Congress or Mayor.

I would like to nominate IL Rep Luis Gutiérrez to be Mexico’s next Presidente.

Why do you hate Mexicans…???

Hate? I am offering some of our ‘best’ people for their government – a gift of reverse amnesty. (un regalo de la amnistía reversa.) Dick Durbin can go too. ¿Entienda?

Only in a hell-hole like Norte Korea would those pukes be an improvement.

Norte Korea it is! And so as to not be too self-serving, I’ll through in Chicago’s own Jesus “Chuy” Garcia, VT’s Bernie Sanders, NY’s mayor Bill de Blasio and of course Harry Reid and Nancy Pelosi. We can do a prisoner exchange of some sort.

Beans. Farts. Do the math.

It is a return to the 1990s, right down to only starting the press conference after Rush Limbaugh finishes his radio program at 3 pm eastern time.