Lending legitimacy to an insurgency 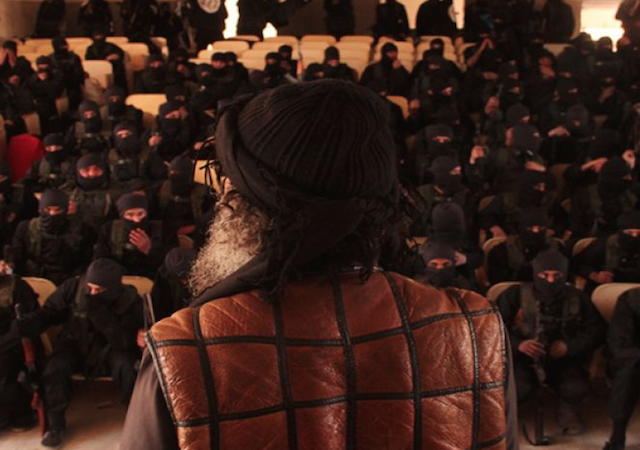 ISIS doesn’t just want to recruit new soldiers into the fold—they want to show those soldiers that joining the cause is more than just a one-off decision.

Over the last few days, the Islamic State in Syria has posted several pictures of “graduation ceremonies,” celebrating the end of training for green recruits and the beginning of their service in what ISIS fighters hope to portray as a legitimate caliphate.

Why the trappings of statehood? Because that’s the goal, here:

“There are two messages being sent by ISIS besides the obvious shock factor: First, their caliphate is an actual functioning and legitimate state. Second, this is long-term struggle,” said Ryan Mauro, national security analyst and adjunct professor of Homeland Security for the Clarion Project. “This is a way of saying that ISIS has succeeded (in creating a state) where Al Qaeda, the Muslim Brotherhood and other Islamists have failed.”

By promoting their special force in a series of propaganda photos, experts said ISIS is sending a message to potential recruits that it has created a professional, deadly and well-equipped force ready to protect its expanding Caliphate.

“The graduation photos send a message by ISIS that it has a military capacity ready to defend the Islamic Caliphate – a ‘government’ that has not lost control and will be able to defend its ‘territory,’ said Jasmine Opperman, the African-based analyst for the Terrorism Research & Analysis Consortium.

Call me crazy, but this makes way too much sense to be ignored.

Right now, ISIS is fighting the same battle that many non-insurgent, vanilla political candidates are facing: how do I get the base to fight for me? Same problem, different animal.

A few months ago, the media went all out for the “we’re beating ISIS” narrative—probably because that’s what shell-shocked westerners needed to hear. At the same time, though, Boko Haram—a small insurgency that is currently terrorizing all of Nigeria—pledged its loyalty to ISIS. We also saw schoolgirls from first world countries sneaking away in attempts to marry into the insurgency.

This is why they’re hosting graduation ceremonies, and why they’re starting training early in life. They’re looking at a coalition resistance made up of established countries; if they don’t portray themselves as a legitimate alternative to the status quo in the Middle East, they risk what would inevitably be a fatal plateau in recruitment and support.

ISIS has been able to expand their training operations from Turkey and Syria and into Libya and areas of Tunisia and Algeria. As they grow, their territory grows, and their influence amongst impressionable potential new members grows.

The evolution of the recruits mirrors the evolution of ISIS itself—they’re young, but they’re determined, and they are committed to building a future in the lot they have chosen.

They just need the snappy uniforms and other imagery the Nazis employed so well, and they’ll have it down.

A marketing tip to ISIS: narratives matter. If you play the audience correctly, your leaders will be eligible for a Nobel Peace Prize. So, you are fighting for an Islamic Spring or to end apartheid in Arab regimes. You are not terminating human lives, but rather aborting them (call it Planned Migration). Sprinkle with emotional appeals and negotiate rights to natural resources with Marxists and you will become a progressive party invited to sip coffee in polite company.

Not bad for the JV team. They’ve got some very smart people leading this group. They understand, just like Obama, that appearances matter.

Maybe if they would live tweet the ceremony we could drop in a 300 pound fragmentation graduation gift. Or would that be against Obama’s rules of engagement?

We’re talking about recruiting young people to a puritanical life-style. What happens when the novelty wears off?