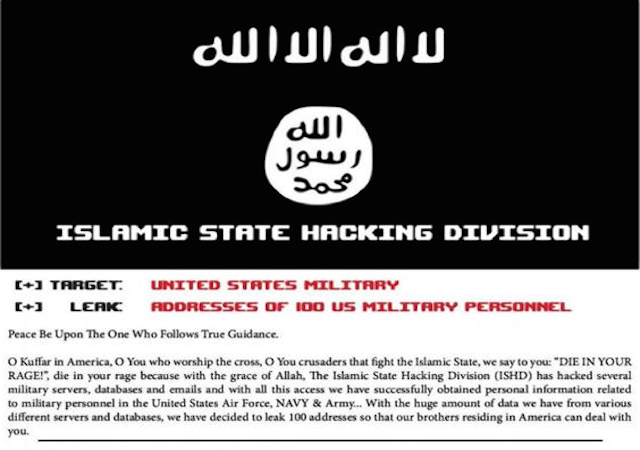 ISIS has posted the names, addresses, units, and headshots of 100 U.S. military personnel they claim have participated in airstrikes against the terror group’s activities in Iraq, Syria, and other areas in the Middle East.

In a message posted to the self-styled “Islamic State Hacking Division,” the terror group urges its members and sympathizers in the United States to target these military members using the same brutal tactics we’ve seen ISIS use against its captives overseas.

I chose not to go looking for the “terrorist Wikileaks,” but the New York Daily News describes what it found:

“These Kuffar that drop bombs over Syria, Iraq, Yemen, Khurasan and Somalia are from the same lands that you reside in, so when will you take action?” the group asks. “Know that it is wajib for you to kill these kuffar! and now we have made it easy for you by giving you addresses, all you need to do is take the final step, so what are you waiting for? Kill them in their own lands, behead them in their own homes, stab them to death as they walk their streets thinking they are safe…”

It lists the name, unit and address of 100 U.S. Air Force, Navy and Marines – many of them pilots – along with headshots of each. One of the targeted is a Navy aviator from upstate New York.

“You crusaders that fight the Islamic State, we say to you: ‘Die in your rage!’” the ISIS post said.

Here’s where it gets tricky. The Daily News, as well as the Washington Times, are reporting that ISIS collected the names and personal information by hacking into protected military databases, which is what ISIS is claiming. The New York Times, on the other hand, says that Defense officials who spoke off the record are claiming that most of the information ISIS posted could be found on social media, or via a public records or residential address search.

Either way, this is a terrible situation. If ISIS did manage to hack into DoD databases, it’s much worse; but the cherry on top of this sundae is that they’re still finding ways to harness the Power of Social Media© to encourage their sympathizers to join the cause. This is a challenge entirely separate from the one facing fighter pilots and military strategists managing the situation in the Middle East—how do we defeat an enemy that has already managed to collect a sympathetic–or just captivated—audience that stretches beyond its conquered territory?

Cut off one head, and another sprouts right back up. Pray for these families—and pray that the DoD can confirm that these “leaks” are really just a fabricated scare tactic.

And California and Illinois and the rest of the democrat run states will still deny concealed weapons permits even to our trained military who are at risk.

Wonderful…. that should make Gabby Giffords even safer.

In one stroke ISIS just deligetimized every gun control movement in the USA.

Don’t worry, these terrorist thugs are only the J-V team. No less an authority than our pResident said so – and we all know how trustworthy and honest *he* is. How much damage could they possibly do?

I, for one, am damned glad that we have the Second Amendment to rely on. And I roundly and loudly condemn ANYONE who would so much as suggest that it is no longer needed.

There is no doubt in my mind that, sometimes, the defense of the nation includes the militia’s (read: all capable men and women of certain ages who are not regular members of the Armed Forces) defense of the members of the regular armed forces and their families. As if the first warning a few months ago was not enough, it’s time to open our eyes and ears and stand watch. It is our turn.

A bit OT, but I don’t think you will mind a pro-troops link.

Here’s a little-known group that supports the troops:
https://otherwheregazette.wordpress.com/2015/03/21/operation-baen-bulk-looking-for-donations/

The core group comprises Science Fiction fans, organized around the discussion groups and forums of the authors at Baen Books. They give troops some really cool stuff, like Kindles loaded with hundreds of books, and are responsive to requests and suggestions.

Americans at their best — seeing a need and filling it, without demanding government involvement.

I’ll be dropping this in on unrelated threads for Amy in Florida to see.

She was very skeptical of my outlining of what some Police forces (and perhaps at the behest of the Federal Gov’t) might do for extra assistance in policing. Especially in the light of the possibility that eventually those of us who see our Freedoms being reduced and our rights constrained might take action to thwart those measures.

I made the claim that with all the unemployed immigrants around, it would be a logical idea for some police forces to hire some of them to fill out their rosters. They would have the add benefit of being very willing to take any action ordered as they wouldn’t have any preconceived notion of the Bill of Rights and the Freedoms guaranteed by same.

Well, Amy from Florida, go to the link and you’ll see that some police departments are already lining up to employ immigrants as police and disregarding their inability to check their background.

So I guess it wasn’t such a crazy idea after all, Huh?

So if I get pulled over by a green card cop, can I make a citizen’s arrest for unlawful detainment?

Ya, the Daesh have nasty things to say, and this is no doubt dangerous for somebody. But if there is any force that can unite the capital “C” Conservatives, christians, Catholics, the Jawas, the kiddies at Reddit, the hackers from Anonymous, the Kurds, and a whole mess of Muslims, it is the Daesh.

The simple truth is that the Daesh have embraced evil, and the hearts of most men hunger for what is good.

Almost every group in your list is faithfully capitalized. I hope the failure to capitalize Christians is merely a typo and not a subliminal or even Freudian slam. That would not be consistent with the impression of you that I have formed via reading so many of your thoughtful comments at this site.

Let’s form a grievance committee. Offended easily? You probably should consider staying off the intertubes.

ISIS ony did this now?

Didn’t they steal the names some time ago?

Is the list accurate, at least as far their being military? I think, if contact is welcone, each one would get many many letetrs and more encouraging them.

This posting of the name is almost meaningless. There’s nobody here to follow their orders.

Patton said it best, “No one ever won a war by dying for their country. They won it by making the other poor, dumb bastard die for his country.”

ISIS and all that it represents must be wiped off the face of the globe for any peace to occur.

Why is anyone surprised at this? The US is at war with ISIS, and the drone pilots are killing ISIS soldiers and destroying ISIS equipement and facilities. They are legitimate targets of war.

Actually, all US military personnel are legitmate targets, including the ROTC faculty at our univerisities. Anyone who has any association with a university will know that there are substantial numbers of Muslims in attendance, and many Muslim terrorists come from upper or middle class families, and are well-educated. One hopes that the military establishment takes these threats seriously and does something about them.

ISIS is also well-connected with other terrorist groups, and it is quite surprising that there has been no major incident since 9/11. It might be that Homeland Security and our intelligence agencies are much more effective than they are given credit for.

“They are legitimate targets of war.”

Dude, you are VERY, VERY confused. There is NOTHING “legitimate” about terrorism.

And EVERYBODY is a target.

We targeted specific individuals in WW II (Admiral Yamamoto comes to mind immediately) and special operations targeted VC cadre in Vietnam (for capture and killing). In today’s war, all the world is the battlefield, as defined by the terrorists in their 9/11 attacks. This definition is what gives authority to our use of Predator and air strikes against terrorists (and their leaders – more individuals we target) wherever we find them – after all, they defined the battlefield, it’s only right that we should conduct our operations on the same field (if there’s no place safe for us, there should be no place safe for them). Both sides kill their enemies wherever they find them on the battlefield. This is not new (although for probably the first time, the battlefield is the whole planet, in a way it wasn’t even in WW II), and it is not terror, it’s combat. Was Osama Bin Laden safe while at home? No, we killed him in his home. Was that terror? I don’t think so. Even at home, he was still on the battlefield he helped to define.

If only we could empower the State Department to find them jobs. /sarc

I’ve heard that Hillary could use some IT help.

” … how do we defeat an enemy that has already managed to collect a sympathetic–or just captivated—audience that stretches beyond its conquered territory? ”

Well, for one, stop letting all those ilegals in. There is no way now of knowing who is in the country. If ISIS sympathizers are already in place it won’t matter to them who they strike, DoD personnel or some ordinary John Doe in the street.
They just want to get their message across and cause hysteria.

hmmm – could these have come off of HILARY’s server?