Turns out Rep. John Lewis has quite a few GOP admirers 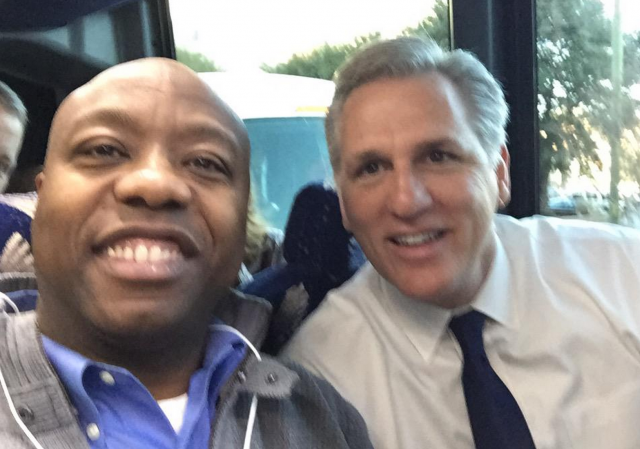 Members of both political parties descended upon Selma, Alabama earlier today. Partisan politics were shelved as members of Congress were unified in remembering the sacrifice of those who marched for freedom.

So how did Republicans commemorate the day?

Such a special day in Selma as we celebrated the 50th Anniversary of the #SelmaToMontgomery marches. #Selma50 #FPI15 pic.twitter.com/2SSja0VGlt

This picture really encapsulates the day. It was an honor to experience the trip w/ @repjohnlewis #Selma50 pic.twitter.com/rl6mMaLLb8

I joined Rep. John Lewis – his bravery on this bridge 50 years ago was a turning point for civil rights. #Selma50 pic.twitter.com/CWpM2wFRDY

.@RepJohnLewis thank you for sharing your memories about what happened here 50 years ago. #Selma50 pic.twitter.com/zaFLYCL2nd

With Margaret on the Edmund Pettus Bridge and the great @repjohnlewis. Thank you for an amazing day #Selma50 #FPI15 pic.twitter.com/ZCoi9SOUqS

At the base of Edmund Pettus Bridge with one of the original foot soldiers from #BloodySunday. #Selma50 pic.twitter.com/w9cVAWAcSF

What an experience. Indescribable the feeling as we walk across the bridge. #Selma50 #FPI15 pic.twitter.com/uFvRDLbeeW

No matter how often I am able to talk with @repjohnlewis I remain in awe of his strength and dignity. #Selma50 #FPI15 pic.twitter.com/DMbeQHrhBt

Great to be in Alabama for #Selma50! #FPI15 @GOPLeader pic.twitter.com/Kdg1Ig5RT1

Honored to stand with the Congressional delegation on steps of historic 16th Street Baptist pic.twitter.com/xEpyfmQwrb

Proud to have been part of @FaithNPolitics pilgrimage and visit the site of the historic Selma March. #Selma50 pic.twitter.com/EghtuGrZIk

Is there one picture of Lewis smiling? He stood with the R’s but hated every minute of it. He is so partisan that it isn’t funny.

And lest we forget,
the Holder Justice Department has vigorously supported states that check the skin color of a citizen, and if the skin color is black, then proceeds to hold that citizen to a different standard, a lower standard, in state hiring, state contracting and university admissions.

It’s all just pointless window dressing and not a single African-American will actually change his or her opinion of Republicans no matter what.