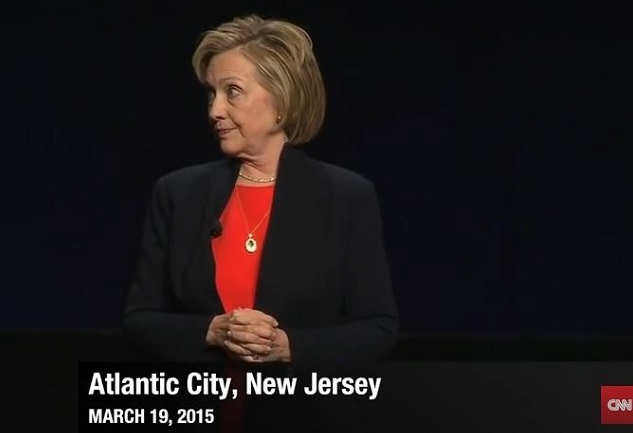 Hillary Clinton received a lot of attention this week for her suggestion of establishing “camps for adults” to address America’s “fun deficit.”  The Washington Post reports:

What many observers say will be Hillary Rodham Clinton’s final paid speech before she begins a presidential campaign was addressed to the American Camp Association. Everyone loves summer camp, and the former secretary of state didn’t talk about anything controversial.

“We have a huge fun deficit in America, and we need to figure out how to fill that fun deficit,” she said, suggesting summer camps for adults (presumably in jest) .

When I first heard about this, my immediate thought was, as is parenthetically noted above, she must be joking.  She notes in this speech that “as a society we are much less racist, sexist, homophobic . . . but we sure don’t want to spend any time with anyone who we disagree with politically,” and goes on to suggest that her fun camps for adults would have “red cabins” and “blue cabins,” and that their inhabitants would have “to come together” and “actually listen to each other.”

Watch the video clip from CNN:

She may be trying to recreate the unifying–if unfulfilled–message of Obama’s 2008 victory speech in which he stated “Americans … sent a message to the world that we have never been just a collection of individuals or a collection of red states and blue states. We are, and always will be, the United States of America.”  If so, adult fun camps in which campers are required to come together to discuss their political ideology somehow misses the mark.

There’s no “fun deficit” in America.

That’s right. The real deficit is e-mail servers. How many people do you know, besides Hillary, who have their very own e-mail server? But they are absolutely essential in case you get hit with a subpoena as Hillary can testify.

Isn’t that what got Bill in trouble?

Being married to Hillary, Bill had naturally worked up a tremendous “fun deficit” which was relieved one day when he encountered his server with a blue dress on. I don’t know if he ever got into trouble, that would depend on what the meaning of the word is “is.”

Poor old corrupt, drain bamaged, lying witch. I doubt she could utter a truthful sentence if her life depended on it.

Camps? Really? Could I possibly be reading that right?

What’s next?
Are they planning to legislate how we have fun now?
Is that the new progressive trend?

Yes, they are serious — the camps will be both fun and [re-]educational —

[for those in the blue and red cabins, respectively].

No. The humorless people in the blue camps are incapable of having fun because they are incapable of being around true joy. The dementors of Azkaban have already sucked out their souls. They deny God so they can not experience beauty, truth or joy. Sort of like 1950’s and 60’s Warsaw Block architecture. Grim.

Twitchy devoted a couple of posts to collating some of the best tweets on this one:

A few days at the red-blue fun camp and everyone would look like Harry Reid.

Fuzzy: Ever since the introduction of the Gregorian calendar we have this “April Fools’ Day” thing. I know this is still March, but really stuff you read in the Onion is parody. Their “articles” are really editorials.

Rags, she probably really does believe this and thinks it is true. Bill, Hilary and 0bama all believe everything they say is true when they say it.

What ails liberal socialists can only be cured with sincere devout prayer and fasting because they are truly sick. Surveys have shown that conservatives generally have greater insight and understanding of liberal socialist positions than liberals have of conservative ideas. We do listen and shake our heads. They listen but can’t hear.

For example, one liberal acquaintance of mine had no idea why not a single Republican voted in favor of the “Affordable Care Act”.

If there’s a fun deficit in America maybe it’s because our government is hell bent on destroying our economy, leaving people with barely enough to survive, while trying to take comeplete control over every aspect of our lives! No money and no freedom will suck the fun right out of any society!

Uh, Hillary. I think Bill already beat you to it. He’s been attending Jeffrey Adelson’s “Fun Camps” on Sex-Island for quite some time.

Seems to me she had a couple of drinks before this speech.

And some of us need concentrated fun. Vergnügen macht frei!

And the camp counselors’ uniforms are so stylish.

What does she think her husband’s Oval Office was?

“…her fun camps for adults would have “red cabins” and “blue cabins,” and that their inhabitants would have “to come together” and “actually listen to each other.””

Hillary is a communist. By the words “actually listen to each other.”, she means the red cabins will receive instruction from the blue cabins.

Fun camps, the progressives’ name for re-education camps. The really sad thing is, a lot of low information Americans will think this is a swell idea.

Think again. Think of Adult Fun Camps way out in the woods. Think about who is more likely to git et by a bear or torn up by a boar, the rural conservatives or the urban and suburban libs?

I look forward to Adult Fun Camps. They are right in my wheelhouse and oh boy will I have me some fun. First, we’ll organize an exercise where all the Red Cabin folks rub bacon grease all over the Blue Cabin folks, as a sign of submission and a token of our regrets for not seeing the liberal way, we’ll say, and then once coated in bacon grease we’ll lead them off on a hike through the woods. Gosh, maybe we’ll see a bear!

Spoken by an idiot, at the direction of other idiots, for consumption by a mass of idiots.

Usually they trot out Crazy Nancy Pelsoi or Michelle Obama to say incredibly stupid things for consumption by cultists or morons.

You know what would be a fun camp? A baseball camp featuring Hillary Clinton’s head thrust through a target, with an endless supply of rotten tomatoes given to campers to throw. How that would be a fun summer.