Hatra, city featured in The Exorcist, destroyed by ISIS

Hatra, city featured in The Exorcist, destroyed by ISIS 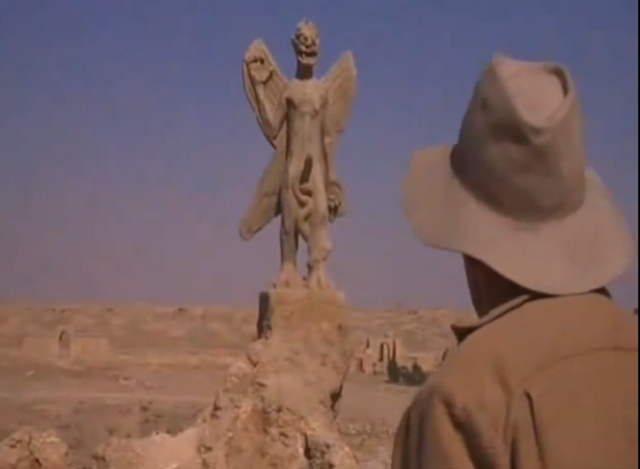 This time, the terror group obliterated Hatra, a city in Northern Iraq that was made famous in the opening sequence of the blockbuster horror film, The Exorcist.

Islamic State of Iraq and Syria (ISIS) militants bulldozed early Saturday the ancient city of Hatra founded 3rd or 2nd BC by the Seleucide Empire, activists and Kurdish media reported.

“ISIS stole the ancient gold and silver coins, which were used by the Assyrian kings and were stored in the city,” Mumuzini added.

A small sequence from that movie will remind everyone of the stunning ancient masterpiece of architecture Hatra was.

This will fuel the outrage of the international community even further, as ISIS and its bulldozing of the famed biblical city of Nimrud.

Activists, officials and historians have condemned Islamic State (Isis) for the destruction of the ancient Assyrian archaeological site of Nimrud in Iraq, with Unesco describing the act as a war crime.

“They are not destroying our present life, or only taking the villages, churches, and homes, or erasing our future – they want to erase our culture, past and civilisation,” said Habib Afram, the president of the Syriac League of Lebanon, adding that Isis’s actions were reminiscent of the Mongol invasion of the Middle East.

Iraq’s tourism and antiquities ministry said on Thursday that Isis had bulldozed the ancient city, south of Mosul, which was conquered by the militants in a lightning advance last summer.

History buffs will note that Hatra was a fortified city in the Parthian Emmpire that challenged the ancient Romans regularly. Nimrud, also known as Kahlu, was an ancient capital of the Assyrian Empire and was established around the time famed pharaoh Ramses II was ruling Egypt.

I discussed the continuing ruination of world heritage sites on my recent Canto Talk appearance. Fellow guest and military historian Brian Jacobsen offered analysis on the options available to the United States and the rest of the world to prevent further slaughter of innocents as well as the pillaging of our world heritage.

One the options discussed was the “Coalition of the Civilized”, which looks to include not only Egypt and Jordan, but Saudi Arabia. There were a series of key meetings between the leaders of the three countries; noted Middle-East analysis and historian Micah Halpern has this review in The Observer.

…They understand that, for them, fighting ISIS is a battle of survival. Abdullah and Salman know very well that in order for their reigns to survive they must defeat ISIS.

We also know from official sources that the Egyptian/Saudi conversation was very straight forward. Egypt wanted to make certain that the new king, like the Abdullah, the previous king of Saudi Arabia, continues to support him both politically and monetarily. And both countries needed to make certain that they share intel on terror and Islamic extremists. From information and leaks, we know that they decided to create a joint force to confront the new challenge from ISIS in Iraq and in Syria and to control the tension emerging from Libya and Yemen.

Add Jordan to the mix, and we now have a move to unify Arabs against the ISIS threat. That’s big news.

In the beginning the collaboration will probably be limited to intelligence and training. But if successful, the links will grow and these countries will actually help each other on joint missions on the ground and from the air.

Let’s hope that plans to exorcise the destructive demons of ISIS are successful…and soon, before more innocents are cruelly butchered and more of our history is brutally obliterated.

I guess the order came down when they saw the statue. No more selfies!

The middle east would be a better place if we had stayed the course in Iraq. Every single American who voted for the Democrats and Obama bears directly a portion of the burden of guilt for the death, destruction, and barbarity being seen in the region today. They, Barack Obama, and his administration and appointees have besmirched the reputation of the United States for all time. They are truly ignorant, disgraceful people.

If we ever wondered whether 0bama is a Muslim or not, I think it’s becoming clearer that he is. The only question left to answer is whether he is Shiite or Sunni.

The fact that he lies so easily is not just due to his clinical narcissism, but it is also to advance the cause of Islam. Google “Taqiyya”, which is sanctioned lying to protect or help Islam or fellow Muslims.

What we did in Iraq is exactly what we did in Afghanistan many years a go when the soviet union fell, our arming the local warlords but not managing the situation caused the end result of 9/11. These idiots just don’t understand that there is real evil in the world and you can not play nice nice with it. The only way to handle evil is to destroy it with extreme prejudice.