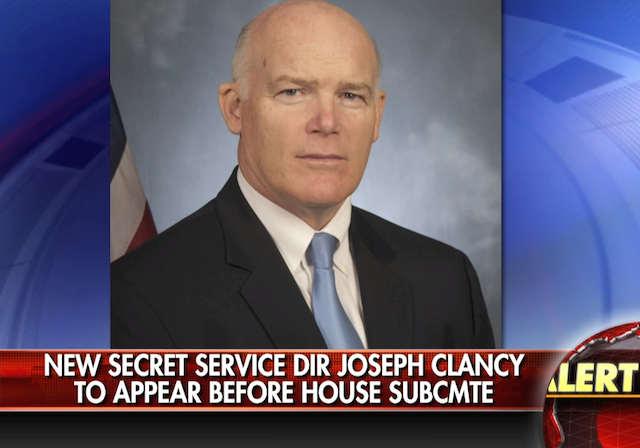 It’s not every day that a Secret Service agent gets drunk, crashes a government car into the White House security barricades, and almost gets away with it—but when it does happen, you’d better believe Congress is going to tear that guy’s boss a new one.

ICYMI, that day happened this week. Two senior Secret Service agents got behind the wheel after a White House party, explored a security barrier with the bumper of their car, and were nearly arrested for it before being saved by a senior supervisor who happened to be on duty.

Oh, and one more small detail—they drove through an active bomb investigation. At the White House. IN FRONT OF PEOPLE.

This is a caps lock-ey kind of post, which we normally frown upon here at Legal Insurrection; but really, what is there to say, and how else should I say it?

New Secret Service director Joseph P. Clancy has only been mopping up agents for a month, but he’s already scheduled to testify before a House subcommittee

Congressional lawmakers are pressing for answers on the late-night March 4 incident where agents returning from a party drove into the scene of the suspicious package probe — and allegedly were allowed by a supervisor to go home. Several congressional committees have requested a briefing from various agencies on the incident.

“He is in for a helluva grilling,” one senior congressional source told Fox News.

A House Judiciary Committee aide told FoxNews.com that the allegations, if true, should merit “severe consequences” — particularly regarding the supervisor who allegedly intervened on the scene.

“It’s unacceptable for a Secret Service employee, who is tasked with protecting the White House, to cover up actions by other agents that endangered the White House complex and innocent civilians,” the aide said.

In the video, Senator Chuck Schumer (D-NY) said, “…this is not trivial.” I hate it when I agree with Chuck Schumer, but seriously; everyone makes mistakes, and every agency has problem employees. But this is the Secret Service. These are the people who are tasked with protecting the most powerful people on the face of the planet, and two of them decided to pull a Kennedy on one of the most closely monitored roadways on the planet.

There’s a problem here. We’ll provide coverage of Congress’ efforts to get to the bottom of this—and any other incidents that go down before then.

Well, what else do you expect from a corrupt organization, that is protecting a corrupt President. The “Rules” don’t apply to these people because they’re “the chosen ones.”

The Secret Service has had a ridiculously bad several years under Obama, with security breaches, bad conduct and now coverups.

While I agree wholeheartedly with your description of the SS, Congress calling for someone’s termination is dubious. The DIABLO’s have the majority in both Houses, and they will not criticize or oppose anything the Obama Executive Branch does. The Democrats may complain, because it is their White House that was put at risk, but any hammer-dropping will have to be done by them. If the DIABLO’s try to hold a Democrat appointee accountable, it would set a precedent that neither the Democrats nor the DIABLO’s would tolerate.

I’ve said it before – idiots like these are going to convince somebody they actually have a shot at killing Obama (or the next President).

They don’t even NEED to get Obama to get a major propaganda victory.

The guy that got all they way to the door of the White House? If he’d been wearing a suicide vest, is Obama even able to comprehend what kind of unbelievable propaganda victory it would be for ISIS to display a video of the White House with blasted windows and obvious bomb damage?

If my job involved protecting jug ears with my life, I’d drink, too.

There’s probably so much overprotection, this doesn’t matter.

What a shame. He’s just what 0bama likes.

Geez, a couple of work buddies in high stress jobs down a couple beers on afternoon break to relax and people just lose their shit. I mean, it’s not like they were Secret Service agents or something. Wait… what? Are you serious?

Some of it is by design (IRS/Lerner, FnF, etc.) and some of it is by institutional blind incompetence (VA, SS, etc.), but is very clear that the Obama administration’s managerial incompetence is degrading the federal government across the board, even down to the very agency protecting their lives.

Theirs will be an easy act to follow and our country’s future would only improve with the destruction of half the federal government.

This conservative couldn’t be more grateful.

Why is the SS so FUBARed?

I judge the current lowering of standards of conduct to be in part the Statist paradigm used by both so-called political parties. If you are Federal, you are above the law. If you are part of the Federal Coercive Organs of the State, you ARE the law unless you step on the prerogatives of the politically powerful and those politically, personally, financially, or sexually connected to them. NO Federal LEO is going to be punished for incompetence or violation of rights. To do so implies that their political leadership is also responsible for their actions.

A fish rots from the head down. How much illegal behavior has the Secret Service witnesses in the Obama White House? I am pretty certain Barry still belongs to the Choom gang. They have been ordered to provide a detail to protect Valerie Jarrett, a woman who holds no official job with a title that would command their protection. I suspect the visitors log is a joke, with all kinds of people signing in under assumed names or being waived past security checks.

After witnessing all that, why should the Secret Service worry about traffic laws?

Because it defines them as professionals.

If you’ve been assigned to protect a gold fish, don’t mess it up.

Lot’s of people dislike their bosses and their clients, none who call themselves professionals see that as a cause to break stuff, DUI, and party with hookers while on the clock.

Obama doesn’t need a secret service. He has all the security he needs in Joe Biden.