“This was voluntary, this was deliberate” 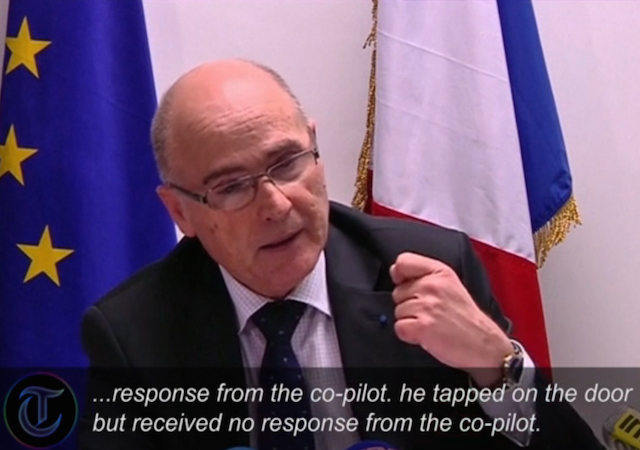 We now know a little bit more about the Germanwings pilot who deliberately crashed into a mountain, killing himself and 149 other people; but friends and family are still baffled as to why 28 year old Andreas Günter Lubitz would lock himself into the cockpit and initiate the plane’s deadly descent.

Lubitz reportedly had taken a hiatus from his pilot training in 2008 due to “burnout.” Friends close to Lubitz told investigators that the break came about as a result of Lubitz’s “depression.” That break lasted for several months, but he was deemed “100% fit to fly” well before this week’s tragedy.

Lufthansa CEO Carsten Spohr went into detail about the hiatus and the security precautions the airline takes with all its employees:

“We are shaken. This is our worst nightmare, that such a tragedy could happen in our group,” CEO Carsten Spohr told reporters in Cologne.

The company carefully vetted its crews and did not only test them on technical abilities but also made psychological checks.

He said the co-pilot had taken an 11-month break, during which he worked as a flight attendant but that he passed all the relevant checks upon restarting. Spohr said the break was not unusual and declined to give details of the reasons behind the pause in training.

“No matter your safety regulations, no matter how high you set the bar, and we have incredibly high standards, there is no way to rule out such an event,” Spohr said. “This is an awful one-off event.”

Officials are slowly ruling out the possibility that this was an act of terrorism—Lubitz had no known affiliations with any terror organizations—but the evidence that has been reviewed so far is no less horrifying for it.

The Daily Mail has video of French prosecutor Brice Robin describing how the co-pilot came to be in control of the plane:

Salvage teams have not been able to locate the plane’s data recorder, but prosecutors have listened to and analyzed the contents of the cockpit voice recorder. The reports of what happened in the moments leading up to the crash are terrifying:

The information was obtained from the cockpit voice recorder of doomed Flight 9525, which suddenly began an eight-minute descent before smashing into the mountains Tuesday. The data recorder for the Barcelona to Düsseldorf, Germany, flight has not yet been found.
…
Robin stressed the actions were deliberate. He said passengers could be heard screaming in fear.

“We start hearing banging, someone actually trying to break the door down,” Robin said. “That’s why the alarms were let off — because these were protocols that were put in place in case of any terror attack.”

You’re telling me you can’t predict mental illness? Who would have ever thunk it?

Certainly, not the liberal elitists resting upon pillars of scientific certainties.

He belonged to a cult you say?

This may be politically incorrect, but dollars to donuts says this will turn out to be a case of antidepressant medication withdrawal. It will join a series of rage killings by people with little history of rage.

Just guessing, but I suspect the co-pilot’s six month absence from training was mandated by policies regarding antidepressant meds.

They also have a mandatory 60 day supervised leave for anyone stopping meds.

Apologies if I turn out to be wrong, but that’s what I would be investigating.

had not thought of that but it is something to look at for sure.

“No matter your safety regulations, no matter how high you set the bar, and we have incredibly high standards, there is no way to rule out such an event,”

Oh, yes there’s a way. Not to rule it out, but to deal with such a scenario. (a homicidal pilot)

You could have a rule that no person is ever left in the cockpit alone – of a pilot goes out, a flight attendant goes in.

That is in fact the rule in the United States, on U.S. airlines, and the flight attendants also barricade the front section with a dining cart.

The pilot punched in the secret access code, but the co-pilot overrode it. At least Sean Hannity said that’s what happened.

It would be interesting if some of the LI crowd with commercial airline experience could venture reasons why that flight data memory card is missing. Finding that memory card, if it were there in fact at the time of the crash, would help in providing needed answer as to that crash.

It sounded as though it were a terrorist act from the very first reports.

When the dust settles on this tragedy and all the facts have been gathered, an anti-depressant drug categorized as a selective serotonin-reuptake inhibitor, or SSRI, will be deemed the culprit. Since the introduction of Prosac in 1987 for the treatment of meloncholia, episodic depression has now been replaced by chronic depression among the ever-growing population of SSRI users and the relapse rate for the drug is 85%. Nowhere can we now find asylums to protect the world from crazy people and these lunatics from themselves – so we drug them and turn them loose.

But the really bad news about the SSRI anti-depressants is summarized in one sentence from psychiatrist and psychopharmacoligist Dr. David Healy:

These drugs have given rise to hundreds of legal actions following suicides and homicides, one of which [is referenced as] the Tobin versus SmithKline case, resulted in a first ever finding against a pharmaceutical company for a psychiatric side-effect of a psychotropic drug.

Guns and crashed airplanes do not kill people but psychotic lunatics helped along by anti-depressants do.

Depressed, suicidal, desperate, I get that. But deliberately taking scores of people with you? That’s beyond my comprehension.

There’s enough cases of a man committing suicide after gunning down his wife, kids, and maybe a few other family members for thoroughness, that I wouldn’t call the behavior unprecedented by any means. Extremely sad, but it does happen on lesser scales with some regularity.

I await the call from Liberals to ban commercial airliners, just as they call to ban “assault” rifles.

Well, George W. Bush grounded them all – that fkew in or into or out of the United States – for a couple of days after September 11, 2001.

They discovered the contrails were causing dimming, which was colling the atmosphere.

NARRATOR: This is the crux of the problem. While the greenhouse effect has been warming the planet, it now seems Global Dimming has been cooling it down. So the warming caused by carbon dioxide has been hidden from us by the cooling from air pollution.

The CBS Evening News reported that now, practically overnight, all Canadian airlines and most European airlines have adopted the U.S. rule of not leaving one person alone in the cockpit.

Either a relief pilot or a flight attendent gets in.

This works out to one every 52 months, but it was probably much easier to do before September 11, 2001 – but now there are more pilots flying.

There have been over 1,000 hijackings by pilots (that would mean empty and small planes at airports too)

The co-pilot of Egyptian Air 990 flew that plane into the ocean after the pilot left the cockpit to answer a call of nature. There is speculation that the disappearance of Malaysian Air 370 may have started in a similar manner because contact was lost within brief minutes of the flight reaching cruising altitude. That’s when a crew member who has been holding it will be able to leave the cockpit.

With 149 people becoming aware that they are going to die in this terrifying manner is terrorism – just not the political kind.

According to the New York Times a previous crash caused by pilot homicide/suicide was that of a Mozambique Airlines plane headed to Luanda, Angola, in November, 2013.

A previous case when a pilot was barred from the cockpit for a good reason was that of a Jet Blue flight in 2012 where the passengers restrained him after they thought he was acting erratically and the co-pilot made an emergency landing in Amarillo, Texas.

In this case it seems to have hapepnmed because the opilot was seen by a doctor (for depression? did he say he was suicidal?) who wrote a note saying he should be barred from flying.

The co-pilot tore up the note and left it in his house. But he knew he would not be able to continue flying much longer.

So he crashed the plane.

Actually, the note was an excuse note, and such notes don;t give reasons.

But he was said to be worried about his re-certification coming up in June.

And his fiance, with whom he’d been living with for seven years, had just broken up with him. I think maybe she must have been demanding he see a doctor, but he couldn’t get a clean bill of health, so, suspecting hat his flying career, about which he was passionate, would soon be over, he decided to crash a plane the next chance he got.