Gordon Fox goes the way of so many Rhode Island politicians 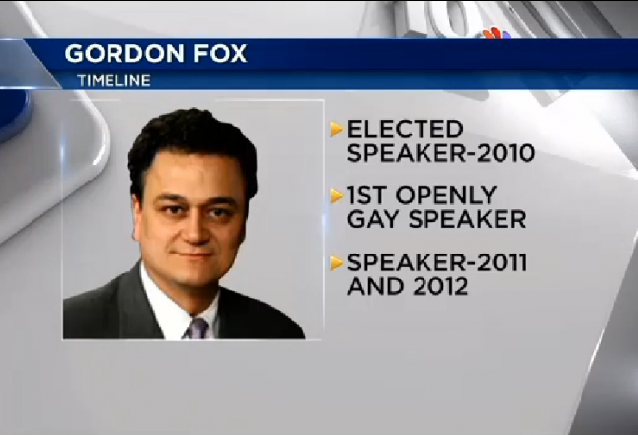 My formerly home State of Rhode Island and Providence Plantations is keeing up its long history of corrupt politicians.

In March 2014, we reported how Gordon Fox, the RI House Speaker and most powerful politician in Rhode Island was resigning after fed and state police raid.

Now we know why.

The FBI has issued a press release that Fox is pleading guilty to three federal charges:

Former Rhode Island House Speaker Gordon D. Fox, 53, of East Providence, has waived federal indictment and is expected to plead guilty in federal court to a three-count Information charging him with wire fraud, bribery and filing a false tax return. The charges stem from former Speaker Fox’s theft of $108,000 donated by campaign supporters to pay for personal expenses; his acceptance of a $52,000 bribe to advocate and move for issuance of a liquor license for an East Side restaurant while serving as Vice-Chairman of the City of Providence Board of Licenses in 2008; and his failure to account for these illegal sources of income on his tax returns….

Fox maintained his composure in U.S. District Court in Providence, but his voice broke when admitting to the conduct and acknowledging he’d likely lose his law license.

Outside the courthouse, Fox was asked if he feels remorse.

“Absolutely, absolutely, without question,” he replied.

Fox began to cry when asked to comment on the charges. He said he could not because the case is still pending.

“I don’t want to be callous to any of the people in the state of Rhode Island, any donors, including the people close to me, the people that looked up to me. My family. It’s tough,” he said.

Tuesday’s plea brings an end to nearly a year of speculation about what the FBI, Internal Revenue Service and state police were investigating when they raided Fox’s home and Statehouse office March 21, 2014.

Fox was once considered among the most powerful politicians in state politics.

Fox acknowledges he received a $52,500 bribe in cash and checks in 2008 to help grant a liquor license to a bar near Brown University when he served as vice chairman of the board of licenses for Providence. He also acknowledges making about 28 interbank transfers totaling $108,000, taking the money from his campaign account and using it for personal expenses.

Prosecutors and Fox agreed to request a three-year prison sentence.

This is a disaster. There are only so many crooked Democratic politicians in RI, and once they all get tossed in jail, the voters might have to elect (gasp) a Republican.

Maybe they can import a few from Chicago. I understand they’ve got an active population there which has almost outgrown its habitat (and Other People’s Money).

You answered my question.

Chuck: In an otherwise beautiful state.

Not to worry. As someone born and raised there, I can assure you that there is no end to the supply of corrupt politicians (both Democrats and Republicans) in RI. The occasional disgrace, removal from office, or prison term is just part of the cost of getting rich quick in RI politics.

BTW, RI has had three Republican governors in recent times. One, Ed DiPrete, plead guilty to bribery, corruption, and racketeering. The next, Lincoln Almond, appears to have been an actual stand-up guy (a former state AG). The next governor, Donald Carcieri, I have no first-hand knowledge of (he’s unknown to me, I do not recall him from RI politics while I lived there), but he seems to have been clean too. He bumped heads with the unions, so Democrats have held the office since then. Rhode Islanders prefer their politicians pro-union and dirty, to fiscally responsible and clean.

Hey. If you really, really want to punish Gordon Fox, send him to a Federal Women’s Prison.

Well the Fox is going from Henhouse on the Hill to Hoosegow… 3 years in Club Fed, Max sentence of 33 years knocked down to 3 years, If Fox didn’t roll over on CD1 Congressman David Cicilline scandal ridden watch as Mayor of the Capital city, and the gaggle of members of the Smith Hill Marble Outhouse who rammed thru 38 Studios then Fox wrangled one helluva deal. Given the unreckoned scandals Fox managed to dodge, the U.S. Attorney earned no bragging rights settling for a 3 year sentence.

If you check back on the last 7 or 8 RI House Speakers, about half left left public life during holding that office, or later, under imminent threat of indictment or in disgrace due to more personal peccadillos. We’re not Louisiana or Illinois, but we’re close.

Just reread the article, and then the original link, and my initial impression was confirmed: No where is his political party enumerated. Like Gomer Pyle always said, “Suprise, surprise!!” The MSM continues in it’s unwavering support of the Democratic Party. Now we’ll see his hand slapped and whatever sentence he’s handled will be reduced to a minimal sentence with credit for good behavior, time served, deeds performed, etc. etc. …

Nationally, RINOs have only recently (last two decades) begun to be inseparable from Democrats. In Rhode Island, Democrats and Republicans have long been interchangeable. I understand your condemnation of the MSM (most people still think there’s a real difference between parties, and the MSM protects the Democrats), but in RI, policy-wise there’s no real distinction between them, and the people see so much corruption that they caught on a long time ago that the two major political parties are merely two sides of the same coin.

Corrupt and warped: he’s still more preferable as a Speaker than Boehner.

Rhode Island’s reputation for corruption goes back to before the Revolution. The “gold and silver coin” clause of the Constitution is there because Roger Sherman was bilked in a business transaction with a Rhode Islander by the use of RI paper money. (He received notes in payment that had the face value of the debt owed him, but that had depreciated so as to be essentially worthless.)

According to Madison’s “Notes on the Debates in the Federal Convention,” when it was suggested that the “existing laws ought to be guarantied to each state by the United States,” Gouverneur Morris objected, thinking “the resolution very objectionable. He should be very unwilling that such laws as exist in Rhode Island should be guarantied.”

According to James Madison himself, “In Rhode Island, the judges who refused to execute an unconstitutional law were displaced; and others substituted, by the legislature, who would be the willing instruments of the wicked and arbitrary plans of their masters.”

According to Mr. Gorham, “Rhode Island is a full illustration of the insensibility to character produced by a participation of numbers in dishonorable measures, and of the length to which a public body may carry wickedness and cabal.”

To the authors of the Constitution, Rhode Island was an exemplar of how NOT to run a government, and what to avoid in the creation of a new one.