Do these women actually know who Margaret Sanger was? 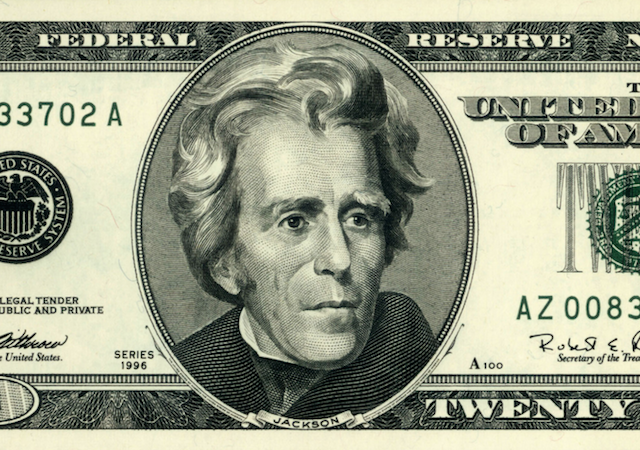 Feminists are marching against Andrew Jackson.

(Well, at least against his face.)

A group called “Women on 20’s” is trying to rally online support behind an effort to change the face of the $20 bill to that of a woman who “the people” see as instrumental in the fight for gender equality:

The year 2020 marks the 100th anniversary of the passage of the 19th Amendment that granted women the right to vote. So it seems fitting to commemorate that milestone by voting to elevate women to a place that is today reserved exclusively for the men who shaped American history. That place is on our paper money. And that new portrait can become a symbol of greater changes to come.

Let’s make the names of female “disrupters” — the ones who led the way and dared to think differently — as well-known as their male counterparts. In the process, maybe it will get a little easier to see the way to full political, social and economic equality for women. And hopefully it won’t take another century to realize the motto inscribed on our money: E pluribus unum, or “Out of many, one.”

I’m going to leave this alone, mostly because I support legitimate “female disrupters,” and I’m not particularly attached to Andrew Jackson.

What I won’t leave alone is their list of nominees. For the women heading up this effort, Andrew Jackson is “problematic,” mostly because of his role in passing the Indian Removal Act of 1830. But what’s more problematic than Jackson’s face on the 20 is their inclusion of Planned Parenthood warrior Margaret Sanger in their list of nominees to replace him.

Here’s how they describe her:

More than 50 years after watching her own mother die a young death for what Sanger believed was exhaustion from having more children than she could handle, Sanger played a key role in the founding of the International Planned Parenthood Federation and served as its first president. She was also instrumental in working through the years to ensure the development of a female-controlled contraceptive and lived to see the results – the birth control pill – approved by the FDA in 1960.

The problem here is that Sanger’s entire body of work is about ten times more “problematic” than anything Andrew Jackson did. From LifeNews:

In Margaret Sanger’s book, “Pivot of Civilization” she describes African-Americans, and immigrants as “human weeds,” “reckless breeders,” and “spawning… human beings who never should have been born.” However, pro-abortion supporters conveniently forget these words, and her crusade against the poor and minorities, when the praise her as an advocate for women.

In her book, “Woman and the New Race,” Sanger argues that because the conditions of large families tend to involve poverty and illness, it is better for everyone involved if a child’s life is snuffed out before he or she has a chance to pose difficulties to its family. She writes, “[We should] apply a stern and rigid policy of sterilization and segregation to that grade of population whose progeny is tainted, or whose inheritance is such that objectionable traits may be transmitted to offspring.”

Then in Birth Control Review she explains that the purpose of the American Baby Code was to provide for a better distribution of babies and to protect society against the propagation and increase of the “unfit”. Unbelievably, she also argued that women shouldn’t have the legal right to bear a child, and no man shall have the right to become a father, without a permit.

So, what? We’re going to swap one “problematic” white guy for someone who is literally one of the most racist people to ever exist? The fact that Sanger is on the same list as Sojourner Truth, Rosa Parks, and Harriet Tubman should be cause to scuttle this whole project completely.

The willful ignorance of the feminist movement has always baffled me. You’d think that after all this time, they would have found someone to quietly usurp Sanger’s place in the women’s rights timeline, rather than continuing to stand behind a legacy of advocacy for ethnic cleansing and parenthood by permission.

Then again, that would mean expecting consistency from a movement that operates based on the assumption that its target audience can’t think for itself.

Sanger was a very eager eugenicist, in addition to being a flaming racist.

She had that in common with the Progressives of her day.

Germany didn’t blaze the trail. Americans did that. And Sanger was in the vanguard.

While Germany didn’t “blaze the trail” they did extend that trail for many, many miles. We should remember that Margaret Sanger expressed her admiration for Hitler’s efforts to eliminate various inferior races on more than one occasion. I wonder how many black women that admire Sanger are aware that they are the ones she wanted sterilized so they couldn’t reproduce and crowd the world with inferior babies?

I’d put it that we blazed the trail, and the Germans following to make it an autobahn, using that Teutonic efficiency and their Collectivist “scientific government”.

But the same impulses started here, with our Collectivists, the Progressives.

What is wrong, with: “Every child, a wanted child”?

I would agree to putting Margaret Sanger’s face on America — if it were a two-cent coin.

Feminism is a religious cult, abortion its sacrament, and Sanger one of its prophets.

However… I’d lead the charge to get Joe Biden’s mug on a twenty.

I recall Clinton on a three once, but I ain’t takin’ any twenties without Jackson. And don’t even mess with Benjamin.

I’d rather see Reagan on the Twenty, but that’s another story.

Y’all misreadin’ my point. I want Joe Biden on the twenty so I can afford to wipe my ass with him.

In answer to the sub-headline, “Do these women actually know who Margaret Sanger was?”, the answer, unfortunately is YES. And that is why this is so wrong and scary. The leadership knows exactly who Sanger is.

Here is an idea, stop trying to change every little thing just because your race or sex is not on it. And if then $20 bill bothers you give them to me!

I can see Sanger on a Feminist version of Monopoly money.

Feminist Monopoly would include the following: land on any Planned Parenthood Clinic and decide whether to buy an abortion at that location; Pass “Go”, collect 200 birth control pills; “Opportunity Knocks” you up- “Go Directly to An Abortion Clinic, Do Not Pass Go”; “Chance” –You get to hate on men for $20.00; You pay $75.00 for your utility bills of waxing or nails or tanning. “Opportunity Knocks”-Go to Congress and Demand Free Contraception. Instead of Railroads you can buy up to four email servers to hide from the bank, your gov’t employer. You make men pay triple if they land on your space. You use token males as game pieces.

You win Feminist Monopoly by having the most aborted fetuses and more Sanger Monopoly money than the richest male on earth.

Jackson was for equal-opportunity. If you were British, Spanish, Indian, it didn’t matter to him. He killed you just the same.