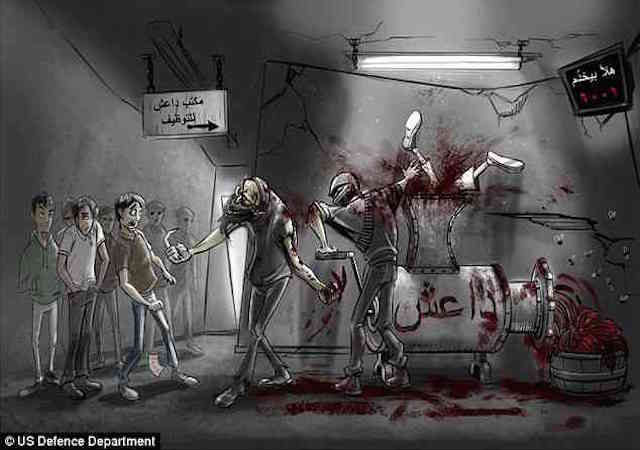 The U.S. military is worried about ISIS—and not because of their violent offensive tactics.

ISIS is good at propaganda. Really good. Their use of social media to recruit and promote themselves is unlike anything we’ve seen from an extremist group, and what’s worse—it’s working. Military officials believe that ISIS may even be winning the “propaganda war” in the Middle East.

No stranger to propaganda themselves, the U.S. military decided to fight back. The Department of Defense recently dropped 60,000 copies of a leaflet depicting potential ISIS recruits literally being put through a meat grinder.

Why propaganda? The U.S. military believes that, for all their bravado, ISIS is currently running a precarious defense in the Middle East. They’re teetering in Iraq, and losing ground in Syria, partially due to coalition airstrikes targeting strongholds.

The leaflets, part of an information campaign to discourage people from joining the extremist group, were dropped in a canister by an F-15 fighter jet last week.

“”The message of this leaflet is, if you allow yourself to be recruited by Daesh, you will find yourself in a meat grinder. And it’s not beneficial to your health,” said Army Col. Steve Warren, a Pentagon spokesman who released a copy of the leaflet Thursday in response to media requests. Daesh is the Arabic acronym for the Islamic State group.

(“Daesh” is the Arabic acronym for ISIS.)

Take a look at it: 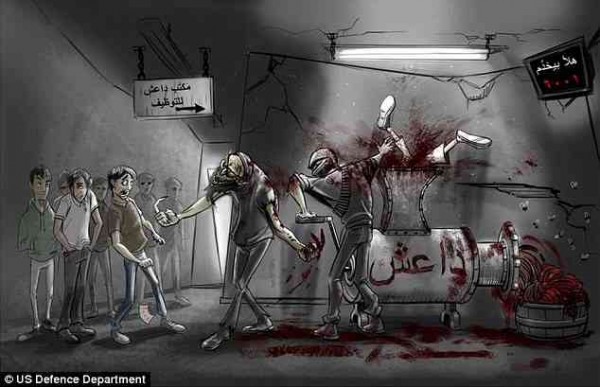 ISIS claims it has a $2 billion recruitment, video, and social media budget at its disposal. Can the U.S. military keep up with this one-on-one approach? We’ll see—but I’m positive it will take more than one leaflet to make a difference.

Featured image courtesy of the Department of Defense via the Daily Mail.

ISIS doesn’t need propaganda as long as they have Obama.

It might be more effective in the rest of the world to co-opt the communication lines of the DAESH and slip in a dose of reality.

Somehow the DAESH have some people thinking life is idyllic in the Caliphate.

Army PSYOP (now called MISO) has really come a long way in the last 15 years. Production quality is much better. This harkens back to the kind of quality present in the 90’s collaboration with DC comics on a mine awareness campaign.