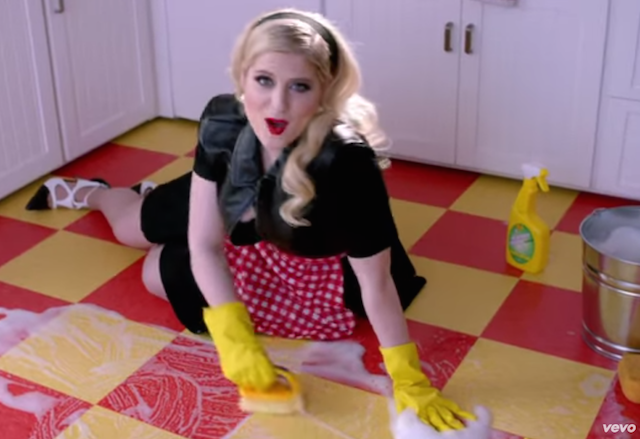 Right now, lurking in your radio, is something so…so hideous…so backward….that it threatens to destroy gender equality as we know it.

We’ve known for a long time that some feminists have a problem with women who choose to become housewives, and an even bigger problem with women who embrace their feminine roles and wiles to their advantage. Those same feminists are on the warpath again, this time against a 20-something pop star who chose to make a cheeky video about what she would like to see in her future partner.

Watch and listen (no, actually watch and listen—the rest of the article depends on this) to the unspeakable bane: “Dear Future Husband,” by Meghan Trainor.

The shock. The horror. PURGE IT BEFORE THE CHILDREN SEE.

Buzzfeed did an excellent work curating the internet’s reactions, from the irrational to the reasonable. The song and video are prompting conversations like this… 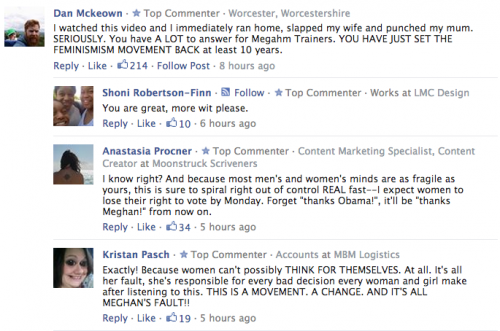 I have no respect for meghan trainor pic.twitter.com/a1sH9MQOkn

In 2015, everything is problematic—even sexy cheek directed at your own husband.

I would agree with you if you watched this and said that this song comes from a high-maintenance perspective. I’d nod along if you made fun of her for hand-scrubbing her floor, because we have sponge mops now, and they are liberating! But calling this video “sexist” and “stereotypical” completely ignores the sassy reality of how men and women relate to each other.

Scroll up and take a peek at the tweet containing the feministy takedown of Trainor’s song—everything in this song is problematic for whoever drafted those talking points, but what the author and other feminists who are standing behind these criticisms are ignoring is that some women simply view their role in a relationship differently.

The critics of this song seem to have a huge problem with the proposition of a woman as a tease, which is even more ridiculous than criticizing Trainor for saying she’d like to stay home and cook her husband dinner. Sex is the hobgoblin of the feminist movement, because it’s the one thing these women demand control over that also places them in a place of vulnerability and acceptance. I’ve asked several feminist friends about this phenomenon, and none of them have ever been able to explain it beyond telling me that for men and women to be truly on equal footing, the sex between them can’t have anything to do with what a man may want.

I know. I’m confused too. Anyone else need a drink?

This song isn’t about “objectifying women” or “perpetuating sexist stereotypes”—it’s a 4 minute long flirtation that portrays a hyperbolic version of the same tease we see at work, at the bar, at the gym, and in the produce aisle. It’s not about submitting yourself to a man for approval, sex, and a list of tasks; it’s simply one perspective of what living a labor of love could look like—if that’s what you want.

Of course, feminism is never really about what women want, is it? Maybe that explains why they’re getting so worked up over one woman’s cheeky flirtation with her fans.

I thought it was a great little pop tune and video.

The problem is deeper, though. Once you realize (how can you not by now?) that those in group A, the authoritarian group, who despise this video, cannot accept the idea that the world must accommodate this or any other kind of unorthodox (even if whimsical) expression, then as a member of group B, who just wants to enjoy the tune and live your life as you see fit, you also must realize you are in the midst of a war against a very determined enemy who wants to destroy your freedom. So no matter what the issue, what corner of the culture you are living in, this is the larger and inescapable fact of your life now. I meet people who say, “I don’t care about politics” as if their avoidance or denial will exempt them somehow from any of Group A’s depredations. It won’t. Life as we knew it in America is over. This is a war, and you’re in it whether you like it or not.

What an original cord structure.

A growing number of American young men are opting out of messing with increasingly “problematic” women.

??? Having a hard time divining your intent here.

Rags, do you consider Trainor “problematic”?

But I also consider pretty much anyone in show biz toxic, at least in terms of forming a lasting relationship built on mutual respect.

In the broader context, there are a lot of young wimmins who aren’t capable of a healthy relationship, by training and high-priced indoctrination.

The indoctrination has become pervasive.

Relationships were never easy. Probably more difficult today than ever before. But the effort is worth it. Hopefully, women will not be deceived by the constructed stereotype of men, and men will not overreact with equal force to the popular absurdities.

Small print: Individual character may and will vary.

My daughter is 3. She is my only child.

#1) She will rule the world of women because society has lowered the bar of expectations for girls to be so low and basal that any girl with a present dad in her childhood will mow the rest of them down with reason and accountability.

#2) I’m actually a little bit concerned about her options for a spouse as society has pretty much removed reason and accountability along with any expectations from the role of being a young man. The lives off his parents man child till 30 is not a candidate to be my future son in law.

Sure every dad talks a tough game when his daughter is 3, but I’ve only got one shot at this and I’m not losing w/out a fight.

Service MAN. They know and understand the world of actual men.

“#2) I’m actually a little bit concerned about her options for a spouse as society has pretty much removed reason and accountability along with any expectations from the role of being a young man. The lives off his parents man child till 30 is not a candidate to be my future son in law.”

Oh, how I feel your pain, Andy. Our only is twelve. With college looming in the not-so-distant future, I’ve moved beyond “concerned.”

Hey Andy, I was wondering the flip side for my little 1y.o. son… I’ll try to have his heroes be John Wayne, Audie Murphy and the like, to respect girls that can think for themselves and whose self-image isn’t reliant on boys’ responses to their bodies, and to follow Newton’s scientific method but have all the Christian faith a heart can hold. If we can keep their heads out of smartphones, let’s get the kids together in a few years, what do you say? =)

You are all reading way too much importance into this. A pop song, Hollywood, video games, pro sports, or any other sort of entertainment folly has never been a moral / philosophical template for me, nor did it raise me as a child if ya know what I mean, so now bring on the hate you all.

Thanks for this and I agree. I found it amusing but hardly worth a lot of analysis.

Dissent equals hate for you?

Of course not. “Hate” is catch-all pop culture slang for dissent these days. Figured most would get it. Or perhaps you are subtly pointing that out. Reckon I could’ve used quotes. Or an emoticon. That would be a first for me. Reckon I’m way behind. So no, I do not actually feel hated. You can flame me. I’m fine. Thanks.

Did those critics even listen to the song? Or take five seconds to google the lyrics, which is faster.

“Apparently we are still in the 1950’s and the only thing that wives are capable of is buying food and cooking.”

No. Just no. The singer explicitly states that she *doesn’t* cook and that she does have a full-time job.

“You got that 9 to 5
But, baby, so do I
So don’t be thinking I’ll be home and baking apple pies
I never learned to cook
But I can write a hook
Sing along with me…”

It’s a silly pop song, but if you’re going to criticize what it says, at least read the lyrics first.

That’s part of what makes this whole spat so funny.

I run two small businesses AND buy the groceries. Let’s get real… my husband hates shopping and I want to open the refrigerator and see something other than bologna and cheese.

Meghan Trainor apparently has the same gift that Sarah Palin has — the ability to live, rent-free, in the heads of progressives.

Oh, that’s sexist of me…

By the way, Postmodern Jukebox does a wonderful cover of Ms. Trainor’s “All About that Bass”.

All Meghans are overweight.

Trainor is feminist with an emphasis on “feminine”. But seriously, is there any father who does not wish their daughter less than their son? Is there any husband who does not appreciate the equal stake a man and woman have in a relationship and their children? Is there anyone, male or female, who does not realize that life is long and circumstantial? Set your priorities accordingly.

Remove “does not” or replace “less than” with “the same as”.

Liked your reference to Melvin Udall in “As Good As It Gets,” Andy.