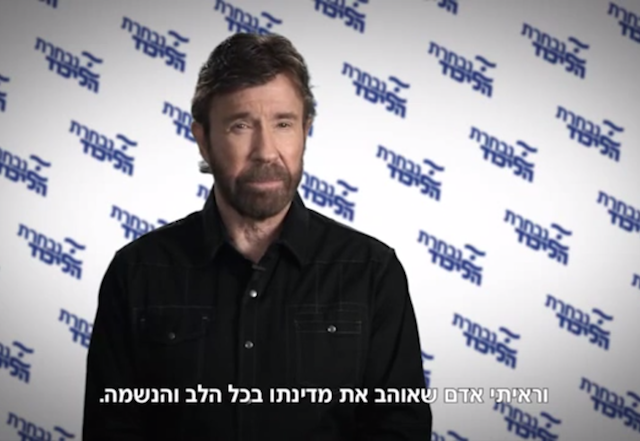 Israeli Prime Minister Benjamin Netanyahu has reached peak campaign season with his latest endorsement—a short, sweet, and to-the-point video message from none other than Chuck Norris.

Yid With Lid has the video:

I watched Prime Minister Netanyahu’s speech before Congress, and I saw a man who loves his country with all his heart and soul. I also saw a strong leader that is absolutely crucial for the safety of the Israeli people.

I have done three movies in Israel – “Delta Force” being my favorite – and I formed many friendships while there. You have an incredible country, and we want to keep it that way.

That’s why it is so important that you keep a leader who has the courage and vision to stand up against the evil forces that are threatening not only Israel but also the United States. You see, we the American people need Prime Minister Netanyahu as much as you do. Weak leadership can destroy your country and then the evil forces can concentrate on America, too.

So I ask you, please, for the sake of Israel and the whole Middle East, vote for Prime Minister Netanyahu on Election Day.

He stops short of promising retaliatory karate-chops to the knees of those who vote against Netanyahu.

Tuesday’s Kenesset elections will come down to a neck-and-neck vote, with current polls showing Netanyahu’s Likud party coming in just behind the center-left Zionist Union.

No party has ever won an outright majority in Israel’s 120-seat parliament, which means that Tuesday’s elections are just the beginning of what is sure to be a lengthy negotiation over the next coalition government.

Awesome. Israelis should be wary of losing their nation and lives to internal factions conspiring with international interests a la South Africa, Ukraine, etc.

Good video! I hope the polls are overblown, and Bibi wins.

They say when Chuck Norris does push-ups, it’s the Earth that moves back and forth.

The Israeli people should also be advised that it speaks very well of Netanyahu that the U.S. Traitor-in-Chief despises him because he won’t cave and be slaughtered.

Remember the “Chuck Norris Approved” ad he did for Mick Huckabee during the ’08 primaries? (It’s on YouTube, I just can’t paste links here with my iPad). That was a fun ad, even if Huckabee did end up losing.

I hope Netanyahu has better luck :-/