Finally retiring, will not seek re-election. 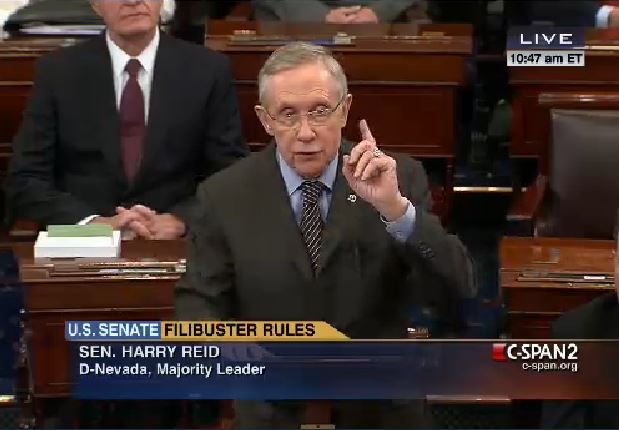 There have been few people as destructive to our political process and discourse as Harry Reid. His pugnacious antics have been a feature here since the inception of this blog.

From The NY Times:

Senator Harry Reid, the tough tactician who has led Senate Democrats since 2005, will not seek re-election next year, bringing an end to a three-decade congressional career that culminated with his push of President Obama’s ambitious agenda against fierce Republican resistance.

Mr. Reid, 75, who suffered serious eye and facial injuries in a Jan. 1 exercise accident at his Las Vegas home, said he had been contemplating retiring from the Senate for months. He said his decision was not attributable either to the accident or to his demotion to minority leader after Democrats lost the majority in November’s midterm elections.

“I understand this place,” Mr. Reid said. “I have quite a bit of power as minority leader.”

Harry Reid announces it's time for him to go home. http://t.co/wO8abpokfM pic.twitter.com/XUgSFF8iUe

Harry Reid: a malevolent force in politics, & nothing he did in DC will improve the place as much as his leaving it. http://t.co/PldTG1D16K

Few have done more to make our politics worse than #HarryReid. To hell with him and the cowboy poetry he rode in on.

He will not be missed.

Over time, the full depths of this puke’s corruption will come to light.

He is one of the worst men alive. Certainly in the U.S., and he’s done immense harm.

He should have quit before he even started – his political tricks…………

Now he’s going to get down with some SERIOUS carpet-bagging. I hope somebody has put a watch on his activities and deals, 24/7. He is a master of corruption, and he’ll be going hard at it now that he will be stepping down from power.

Maybe he finds the Turtle a worthy and dependable successor.

His successor will no doubt be Charles Schumer.

A compliant successor, if nothing else.

While tempting to say anything would be an improvement, this improvement might be immeasurable. Schumer’s just another old line, nothing new, Democrat apparatchik. A union loving, big business hating (except for NYC’s banks, of course), give-away-artist from the land of machine politics, Andrew Cuomo, Sheldon Silver, and Dean Skelos in NYC and environs. For you out-of-staters, Silver, (D) Manhattan, is the now ex-NY senate leader under indictment for corruption. (Who knew? Everyone.) Skelos, (R) Staten Island, is the present NY senate leader–now under investigation for corruption (a trait, it would seem)–who, during the last election, struck a deal with the Cuomo team to neither oppose his run for governor nor to support the Republican candidate. But, hey, it’s New York.

Though, we might sympathize with Chuck “Mighty Mouth” Schumer. He has been dreadfully (delightfully?) quiet for more than a year now, an accomplishment of immense will power and self sacrifice likely in anticipation of dirty Harry’s departure, planned or otherwise. An ambitious hack, he has long had his eye on Democratic leadership in the senate. It would be refreshing if the Democrats had someone–anyone–new and refreshing to offer. Schumer is just more of the same old.

just exactly why would I sympathize with that greasy ego-spot that constitutes Chuck Schumer? He’s an oleaginous liar and no better than Reid. They sold out their own constitutional responsibilities for the greater Obama Power. He should NEVER be allowed to be Majority leader, based on past performance

Leaving on step ahead of the prosecutor.

He likely would not have won re-election, so this moves the Nevada seat to likely R back to toss-up.

“Mr. Reid, 75, who suffered serious eye and facial injuries in a Jan. 1 exercise accident at his Las Vegas home,..’

Yeah, right. I think Reid’s crony thug ‘friends’ were ‘exercising’ their judgment. Reid was given notice.

How much has Reid’s personal net worth risen since his 3 decade career began? Too bad Lib media doesn’t scrutinize his wheelings and dealings. Harry Reid is nothing more than a boil on the backside.

Burn in HELL, you destructive A$$HOLE!

After making himself rich, he leaves a trail of destruction in his wake. Good bye. Good Riddance.

I don’t want to make light of elder-abuse but I think Harry was beaten up because, well, it’s just kind of easy to see that happening.

Notice his comments in the interview that he gave. It was something along the lines of “Senator McConnell shouldn’t celebrate, I’ll be around for another 18 months doing the same thing I’ve always been doing.”

My first thought was “Making yourself rich at the expense of your constituents and destroying the fabric of the United States via ‘Fascism,’ ‘Redistribution of Wealth’ and ‘Crony Capitalism?’

You know, now that I think about it, the leadership battle is going to get VERY, VERY interesting very quickly.

Anyone have any bets that the Marxists and Redistributionists will seek to push Durbin out of the Leadership and are pushing for Schumer to become Minority Leader and put Elizabeth Warren in the “Minority Whip” spot?

Think about it – It gives her a very, very high profile position, with lots of press coverage, with the idea that she will get name recognition. It also makes the Progressives happy that their “issues” are being taken seriously by the Dims, yet puts Warren firmly under the thumb of Schumer, who is going to make sure Warren does what the “Party” wants her to do and so she doesn’t go off the reservation (pun intended).

It’s a long-term play, with an uncertain payoff, but if Warren is serious about not running THIS cycle for President, it would give her the “status” to run in the 2020 Cycle (assuming she is still able to, which I would suggest she would not be able to handle a Presidential campaign at that age).

Yes, right on. Puts them all in highly visible places to draw fire away from Obama while keeping everyone, and each other, in line. Comments re Schumer in my reply to The Fine Report.com, above.

The weak and feeble old man quit because he knew he would lose. What a pathetic, corrupt liar.

Hard to think of anyone other than Ted Kennedy who did more damage to the nation while in the Senate.

Party at the Koch brother’s house!

Nevada, could you please choose more wisely this time around?

They may have last time except that the NRA endorsed Harry Reid over the Tea Party candidate. I’ve never forgiven them for that.

My parents told me, if you can’t say something good about somebody, don’t say anything at all.

Counterintuitively, I am grateful to Senator Reid for all the damage he’s done and will continue to do to the Democrat Party.

Seems more like he has led the Democrats to do great damage to America, though.

Debbie Downer here, saying ‘The asshole is going to be there for another 2 years, f’ing up as much as he possibly can.’

Well, in the meantime maybe somebody will bash his other eye in for him. That would slow him down a bit.

Yes, he’d look much batter with a matched set of eyes.

Many thanks to whoever beat the guy up earlier this year. Mission accomplished!

This surprised me, not so much thathe wouldn’t run for re-election in 2016, because I thought the chances were about 75% that he wouldn’t, but that he made the announcement so early.

Maybe what pushed him to make – or announce – a decision is the extremely long time in advance of the election that campaign funding goes. He’d have to start raising money soon if he was going to run.

There are reasons other than his accident – which, by itself, is only a temporary situation – for him not to run for re-election:

1) The possibility he wouldn’t win re-election. It took some trickery to win the last time, mostly trying to have his favorite opponent win the Republican primary, by, for one thing, making sure not to attack her.

2) His age – and the accident could be a factor for what it signified.

Or he might be he is telling the absolute truth about neither the accident nor the loss of the Democratic majority being the reason, because he decided this already a year or two ago, and told some people. (so he couldn’t claim something recent caused it. Some people know that’s wrong. And there’s his pride.)

Dirty Harry (no disrespect to the Clint Eastwood character) got an offer he could not refuse. The boys that control the gambling got a bit upset after they learned Reid was going into competition with help from the Red Chinese.

If I were a betting man, I’d bet that “exercise machine” that smashed his face was some mob guy named Guido with a baseball bat.

Reid is the most corrupt modern member of the Senate, perhaps of all time, with the possible exception only of Hillary Clinton.

He’s made millions from sending federal earmarks and agency rulings his cronies’ way, then being rewarded by being allowed to “invest” in various ventures well past the risky beginning stages, just as they go into profit.

The most egregious was a property in the middle of nowhere in Nevada. Reid forced a new interstate highway to alter course by 30 miles at a cost of many millions, which put an interchange right on his pals’ property, which he was then allowed to invest into. How he wasn’t prosecuted for that one remains a mystery.

His sons are also beneficiaries of his influence-peddling and favor-selling.

Reid has been very lucky to be elected and reelected so long. He has always been on the short list of targets for the GOP, only his close mob/union ties have pulled him through.

2016 was likely the year his luck runs out anyway.

Reid’s announcement made my day, only wish his resignation was effective immediately. Sadly, had establishment Republicans backed the Tea Party winner of the Republican primary, Reid might not have been in the Senate today. He is there because Republicans did not close ranks after their primary. There is a good learning lesson there, Republicans must not split and must back their primary winners whether establishment or Tea Party. Oh, and would our present Republican leaders please grow a back bone and make the Times correct about fierce Republican resistance, all I’ve seen is a few whimpers.

Like some others here, I’d love to know who beat the tar out of dingy Harry and told him to retire.

…or a pretty respectable backhand…

Ironically, Reid was a boxer in his youth.