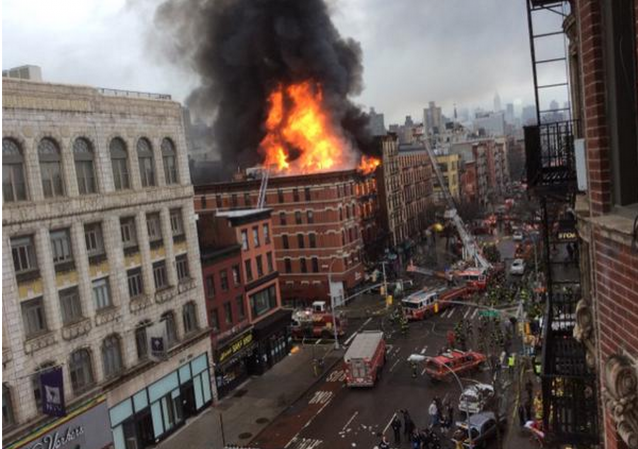 Just in: Reports indicate firefighters on are the scene after a building collapsed in Manhattan.

As many as 30 people were hurt in the partial collapse of an East Village building Thursday afternoon, law-enforcement sources told The Post.

The destruction near the corner of Second Avenue and East Seventh Street was reported shortly before 3:30 p.m.
The FDNY quickly declared a three-alarm emergency at the scene, which it said was a mixed-occupancy building at 125 Second Ave.

Authorities told DNA Info the explosion was consistent with a gas explosion, though this has yet to be confirmed:

“It was like a bomb,” Aleksandr Srdi, 32, who lives around the corner, said. “Everyone was like what’s going on? People from Starbucks were yelling to get back inside and they were trying to lock the doors.”

The explosion was consistant with a gas explosion, authorities said.

About 4 p.m. the building at 125 Second Avenue which was engulfed in flames collasped completely.

…A fire caused by the blast spread to two other buildings, a fire department spokesman said.

The building was landmarked and had a stop work order on it since 2005, according to the Department of Buildings website.

This is NOT looking good… #EastVillage pic.twitter.com/z5u7POHT2j

We will monitor this story and provide updates as they become available.

People from Starbucks were yelling to get back inside and they were trying to lock the doors.

Did they start conversations about race?
With the doors locked, people would have nowhere to go. It’s the perfect opportunity to MAKE them listen to the race thing.

My prayers for the residents, visitors, neighbors, firefighters, and all their families.

This does illustrate the downside of “landmarking” older buildings. Many were built to last a long time – but already have, and nothing lasts forever.

So what’s the solution? There is none. So the default position should be to allow property owners do as they will with their property. There can be height and style restrictions to keep the character of areas, but there is nothing sacred in “old.”

And I say that as an old guy myself.

News stories have it that one of the deceased, a Millenium, was in the building on a second date when it went down. Didn’t anyone ever tell him second dates are dangerous?