At least it’s something 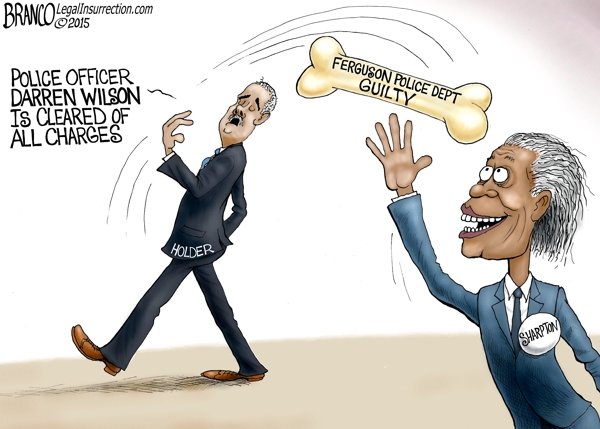 Feeding time for Parks and Crump, ie the opening scene from Jurassic Park when they drop the entire steer into the dinosaurs cage.

If Mike Brown was white, and the same size and demeanor, and attacked Officer Wilson the same way, he would of been shot too.

And no one would be talking about it, we probably would not have even heard about it. The only reason it is a “THING,” is because of his race. And THAT, is racist!

The Do(racial)J report is literally unserious.

One thing that jumped out at me is that it basically just uncritically repeats apocryphal stories its “reporters” heard from people (if, in fact, they DID hear them, and were not just made up).

Another is that one of the main hooks it hangs its “racial” charge on is just crap statistics. It takes very dubious evidence, and lays it at only one possible conclusion…that is really ridiculous. But it is the conclusion that Holder wanted.

Yep. Move on; nothing to see here. If you don’t, you will be tasered or arrested or shot. Like I said, move on. But first put your money in my pocket. I have got to have my salary paid for.

Ragspierre says there is nothing to see. So I guess there can’t possibly be any racism in Furguson or the surrounding towns. After all, he is the unbiased expert.

Well, I see you are breaking cover to tell lies about what I have and have not said.

If you were a serious person, “Deodorant”, it might be worth engaging you. But since all you seem to do is swoop in, poop all over the place, and swoop back out, you are of no more regard than an incontinent seagull.

Whatever your “side” is, you do them no favors with your performances here.

I’m missing something….this community which is supposedly predominately black, elected a local government which then in turn has authority over the PD— is racist?

That takes black on black crime to a new level.

The town is majority black, but the government in overwhelmingly white.

The reason is that the black population is relatively new, incumbents get re-elected, there is very little publicity or campaigning in local elections.

In short, and Holder will never say this, the government of Ferguson, and other towns near St. Louis, is controlled by the public employee unions, who run a government of the unions, for the unions and by the unions.

And they made a lot of money from fines to pay people high salaries. Or benefit other insiders.

Yeah, you said that the other day, and I said, “BULLSHIT”.

I haven’t seen this point made much.

And because unionism promotes lifetime jobs and tenure, most of the employees are long term, and white, having been recruited from an earlier population. Not to mention anyway, the wider population around St. Louis suburbs is more white than that of Ferguson, or the fact that fewer blacks proportionately can pass the civil service tests,(if they use them) or know about the job openings.

So the government sees poor people, or people who don’t vote in local elections, as resources to be plundered.

“So the government sees poor people, or people who don’t vote in local elections, as resources to be plundered.”

Fixed it for you finkelman. Poor, race, or voting has nothing to do with it.