Bill Whittle: The leader of the free world loves America

Bill Whittle: The leader of the free world loves America

Meanwhile, President Obama holed up in the White House 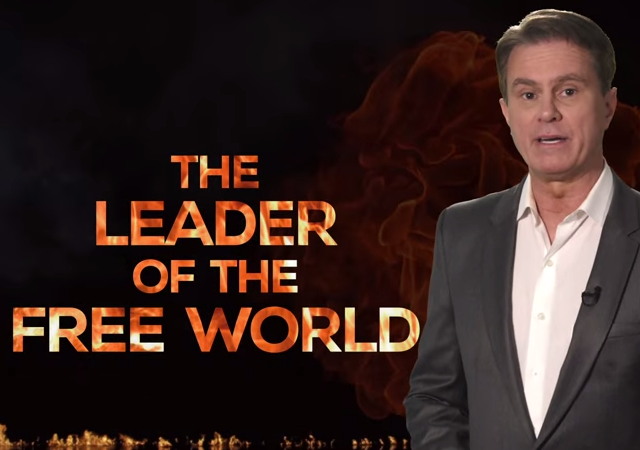 Benjamin Netanyahu’s recent address to congress was the inspiration for the latest edition of Firewall with Bill Whittle.

While some prominent Democrats skipped the speech, Netanyahu warned of the dangers faced by Israel and the west in the face of Islamist terrorists and a nuclear Iran.

He’s the Leader of the Free World, elected by a civilized nation: militarily powerful because of, and not in spite of, it’s cultural commitment to science and art and medicine.

Although he spent much of his early life overseas, the Leader of the Free World grew up in the Northeast, and graduated from Harvard University. That he has a deep and abiding love for America is self-evident: he admires our energy, our inventiveness; our decency and kindness; our innate friendliness and charity. He loves our culture; he admires our private sector which generates so much innovation. And the Leader of the Free World admires and respects our vast military power, and the restraint which it is used – to him, it is indeed the Arsenal of Democracy.

And even though he has grown up the victim of bigotry and hatred, the Leader of the Free World loves America, even though slurs are applied to him still today. In spite of all that, he loves everything she stands for.

Reactions to Netanyahu’s speech varied. Some on the left scoffed, but I think Peter Brookes of the Daily Signal says it best:

Putting both countries’ politics aside (talk about heavy-lifting!), Israeli Prime Minister Benjamin Netanyahu’s address to Congress was essential—if for no other reason than it threw a spotlight on an issue hiding in diplomatic darkness.

Few probably realized, especially outside Washington, D.C., that while Netanyahu was speaking to Congress, Secretary of State John Kerry was in Montreux, Switzerland, trying to cut a deal with Iran’s Foreign Minister Javad Zarif on Tehran’s nuclear program.

Indeed, Team Obama and Team Ayatollah had hoped to reach an agreement on nukes before the end of the month possibly without the public, perhaps even congressional, scrutiny that such an historic deal should unquestionably get.

Netanyahu changed that—and we should be thankful he did.

Meanwhile Obama is a president WITHOUT a Country.

I have said it before and I will say it again because it bears repeating.

Of course Obama loves his country. And Kenya loves him too.

Bibi can look after my children any day!

I want the drugs Bill Whittle is on because apparently they blur one’s rational thinking beyond reason. It is obvious, even to a blind man, that Obama HATES America and he hates Israel even more.

I want the drugs YOU are on that prevent you from actually watching the video or reading the transcript.

The Leader of the Free World that Bill Whittle refers to is Netanyahu. Obama isn’t fit to spit shine his shoes.

I love my neighbors in Realville. Whatever piece of ground they love and call home.

On the world stage let’s not forget, Obama, like errand boy Sharpton, needs your attention and not your advice.

Giving the self-proclaimed haters, the terrorist sponsors, the evil leaders of Iran nuclear parity with other ‘restraining evil’ nuclear countries is evil and Obama knows this. He doesn’t want your good and sound advice. That would affect his foreign policy of synthesizing America with evil.

One has to wonder if God allowed Obama to become POTUS so that America would wake up and see what life is like under a godless & radicalized Iranian type Supreme Leader whose word is to be ‘truth’. And, who’s only bow to any form of a ‘Green’ Revolution was his Keystone Pipeline veto, his attention-getting quid pro quo favoring of his greenie campaign cronies… while the rest of the country suffers. Evil, once again.