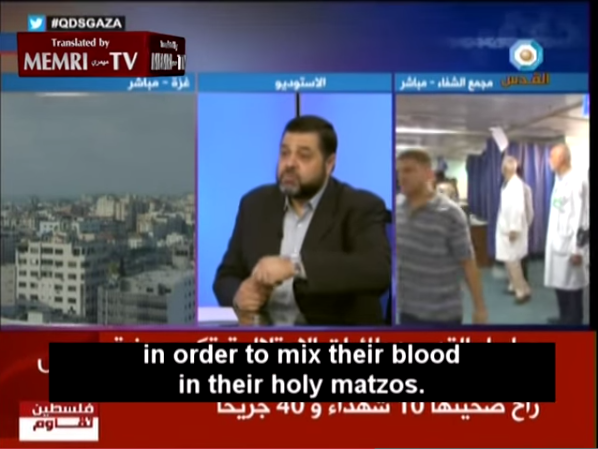 In a few days the world’s Christians and Jews will celebrate Easter and Passover. It’ll be a weekend of good food (and at my seder, plenty of good Israeli wine)—but most of all it’ll be an affirmation of freedom and faith, an expression of joy, hope and renewal.

But for many people across the planet it’ll be an opportunity to indulge in a bit of Jew-bashing.

Brace yourself as the planet’s anti-Semites engage in their annual rite-of-hate, when the internet will soon become awash in the crazy notion of the blood libel.

As Lord Jonathan Sacks, emeritus Chief Rabbi of the British Commonwealth, and one of the leading intellectuals of our time, recently wrote in an important article on the resurgence of global anti-Semitism (it’s behind the Wall Street Journal paywall, but his remarks are also captured in this CNN interview):

The idea [of the blood libel] is absurd, not least because even the tiniest speck of blood in food renders it inedible in Jewish law.”

As explained by Sacks, the libel was an English invention, originating in Norwich around 1144. It was introduced into the Middle East in the 19th century, where it helped instigate the targeting of innocent Jews in Lebanon and Egypt (and, most famously, in Syria with the Damascus trials of 1840).

This violence and hatred against Jews happened decades before the first wave of persecuted European Jewish refugees arrived in pre-state Israel seeking refuge in their ancient homeland.

This summer, a Hamas spokesperson made headlines by invoking the libel

But as Sacks, and other scholars demonstrate, these aren’t the delusional outbursts of a single racist.

Today the blood libel circulates widely and is endorsed throughout the Middle East.

Along with the libel, an Arabic translation of the Protocols of the Elders of Zion, a forgery of a global Jewish conspiracy, was also introduced into the Muslim world in the 1930s. There it was disseminated by powerful political and religious figures, and today remains widely read and reprinted across the region.

Long before Israel’s independence, one of the most influential Arab Palestinian notables of the time—Hajj Amin al-Husayni, the grand mufti of Jerusalem—disseminated this Jewish conspiracy tract, instigated pogroms against innocent Jews in Hebron and Jerusalem and (eventually deported by the British) sat out the war years in Berlin, where he produced Arabic radio broadcasts for the Nazis.

Today, the Protocols’ central message reappears regularly in a diverse array of Middle Eastern art and cultural forms that portray it as historical fact. The Protocols also feature explicitly in Hamas’s 1988 charter—a document that reads like a Nazi screed. To this day Hamas refuses to repudiate this founding document.

In his path-breaking 2013 book, historian Daniel Jonah Goldhagen argues that anti-Semitism also has a basis in Islamic text. He shows that Jew-hatred didn’t only enter the Middle East from the outside, in the form of imported European myths, but is “practically an article of faith”. Here anti-Semitism “has at its core the notion that Jews are the prophet Muhammad’s enemies and impediments to Islam’s triumph”.

In the midst of today’s global explosion of anti-Semitism, it’s become fashionable to highlight historical periods of Muslim-Jewish coexistence while playing down these theological justifications for anti-Jewish hatred.

To be sure, anti-Jewish attitudes in the Arab world has sometimes been muted, subdued and softened. Sephardic Jews did at times thrive and flourish under Muslim rule, even as they were treated with contempt and as second-class.

But Jewish life in the Middle East was always precarious. How else can we explain the cruel mass deportations of nearly 800,000 Jews from their historic communities in North Africa in the years following the establishment of the state of Israel—a Jewish ‘nakba’ that today many Palestinians and their supporters prefer to trivialize or ignore?

According to the ADL, anti-Jewish prejudice is today “persistent and pervasive” in the Middle East and North Africa, where 74% of those surveyed view Jews as power-grabbing and money-grubbing, disloyal citizens in the countries in which they live, and deserving of the terrible things that are done to them.

In the West Bank and Gaza, 93% of adults answered “probably true” to a majority of the anti-Semitic stereotypes tested in the ADL survey.

Most intelligent people recognize that Hamas is a Jew-hating terrorist organization. It’s a view that greatly frustrates BDS leaders who are desperate for Americans and Europeans to buy into their obnoxious notion that this despotic organization, which routinely brutalizes its own people, and celebrates the death of Jewish innocents, is a progressive movement of the left.

But the Palestinian Authority (PA) is a different story. Pronouncing a desire for peace, the PA is seen by many as a “moderate” element.

The PA has done a good job at fooling a lot of people.

Last week, Saeb Erekat, the PA’s chief negotiator, spoke at the annual J Street conference in Washington, where he was long on platitudes and short on substance—and still managed to garner enthusiastic applause.

But like the late Yasser Arafat, PA leaders often say the right things to the international community, only to say the opposite to their own people. In fact, there’s not much daylight between Hamas and the PA when it comes to Jew-hating rhetoric.

Anti-Semitism is also a major component of PA identity.

In January, a cleric on official PA TV called Jews “apes and pigs” whose “hearts are sealed by Allah”.

Last month, the PA aired a TV documentary where viewers were told that Europeans supported Israel’s creation because they wanted to “get rid of the Jews”.

And on February 27, the host of a weekly PA TV program on Islam (a professor of Quranic Studies at the University of Palestine in Gaza) called on Muslims to fight Jews who are “causing devastating corruption throughout the land”.

Fatah members trampling an Israeli flag during a ceremony—a pic uploaded to the party’s Facebook homepage last Thursday along with an accompanying poem extolling the “paradise of martyrdom” for those who would kill the Jews.

Hate fueled by modern variations on ancient blood libels are alive and well in the Middle East, and a major reason there is no peace.

I doubt anybody in the BDS movement is daft enough to believe any of the blood libels. They’re simply over-the-top whacko propaganda.

Why, then, knowing the people who tell those crazy stories, would anybody believe anything else they had to say about the same group of people made the butt of the unbelievable lies?

Well, they don’t know, or if they know something about it, they disregard the fact that the Arab haters of Israel tell crazy stories, because the media underplays it.

As soon as a story is definitively accepted as crazy, they stop reporting it, and the haters of Israel even stop telling it. At least to the kind of people who would understand it as crazy.

That’s one big fault of reporting about Israel. They don’t report the stories that their informants attempted to get them to believe.

Miriam, you have managed to whitewash Amin al Husseini who did a whole lot more than Arabic broadcasts for the Nazis during WWII.

Husseini raised a battalion of European Muslims (Bosnians, I think) whose job was to cleanse Jews from Eastern Europe.

Husseini asked Hitler’s permission to raise a battalion of Arab “soldiers” for the purpose of Jewish genocide in the region. Hitler declined because he regarded Arabs as little more than animals but allowed as how Husseini could be Aryan by dint of his Turkish ancestry.

Husseini made common cause with Himmler and Hitler, and the fullness of his evil deserves to be exposed.

The answer to the blood libel is not a recounting of the varieties of it. That’s a defensive measure. The offensive response is to demand when the killers: Al Husseini, Hamas, Fatah, Hezbollah, Khameini, et al will be held accountable for the hell holes they have made of their countries, the misery they have wrought on their people, and the blood they have shed without cause.

No point in looking at the size of Goliath. Pick up the slingshot and let the stone fly.

You should have included Husseini’s bloodletting in Pre-WW2 Palestine when he incited the Arabs to riot, leading to the deaths of many innocent civilians.
The Hebron massacre being in 1929 being an example.
It was the British who made him Mufti of Jerusalem!

Thanks for reading and sharing feedback.

Vascaino, I did note Husayni’s instigating pogroms on innocent Jews, with a link to the USHMM documentation–even before the better-known 1929 riots came the 1920 bloodletting which took place during the Nebi Musa festival. These pogroms connected to religious festivals, and violence was fomented by the mufti who drew on religion to enflame the public.

Also true Juba, re: the mufti’s support of the Nazi war effort; he was responsible for recruiting Bosnian Muslims for the Nazi SS. This is documented by the USHMM.

Vascaino, you are correct about British culpability. There were other notables–the Nashashibi family, even the Khalidis–who were not ardently anti-Zionist at the time. This is especially the case for the Nashashibi Jerusalemites who welcomed the Jews and were not anti-Zionist either (I found considerable evidence for this in the book I published on Jerusalem). There is documentation of Muslims supporting Jewish religious and historical claims to the land in the late 1800s and early 1900s–including a letter from the Muslim mayor of Jerusalem to the chief Rabbi of France to this effect, and also the Feisal-Weizmann agreement. However, the British did not promote pro-Zionist Palestinians during the Mandatory period. The Husayni clan eventually dominated the political space, with the British blessing (they eventually wised up after the Arab Revolt).

Those within the Jewish Yishuv who supported binationalism in the 1930s and even into the 1940s (like Martin Buber and Brit Shalom) obviously lost all credibility given the Arab Palestinian leadership’s undeniable anti-Semitism and continued incitement to violence.

(Consider that today those who support one-state binationalism where Jews would be a ‘protected minority’ in a Muslim-majority state of Palestine, a claim unbelievably voiced–without any dissent–by multiple speakers at the J Street conference last week, are oblivious to the history of entrenched anti-Semitism in the Muslim and Arab worlds, as well as to its present-day ubiquity).

That the Palestinian leadership sided with the Nazis is one of the many historical facts that too many pro-Palestinian activists (and often academics too) refuse to acknowledge even as so many today make disgusting anti-Semitic comparisons between Israel’s policies and Nazi Germany’s.

“But the Palestinian Authority (PA) is a different story. Pronouncing a desire for peace, the PA is seen by many as a “moderate” element.”

I forget where I read this recently but someone said the “extremist” Muslim wants to cut your head off and the “moderate” Muslim wants the extremist Muslim to cut off your head.