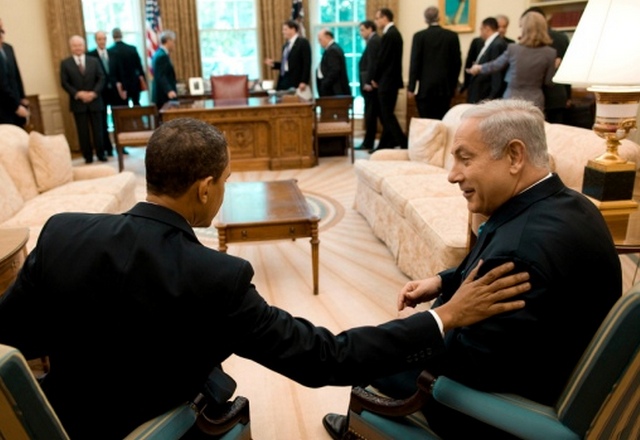 The administration continues in its attempt to marginalize Prime Minister Netanyahu ahead of his speech on Iran. And the efforts appear to be backfiring.

Jeffrey Goldberg tells some important truths in today’s column, Danger Ahead for Obama on Iran:

I’m fairly sure Netanyahu will deliver a powerful speech, in part because he is eloquent in English and forceful in presentation. But there is another reason this speech may be strong: Netanyahu has a credible case to make. Any nuclear agreement that allows Iran to maintain a native uranium-enrichment capability is a dicey proposition; in fact, any agreement at all with an empire-building, Assad-sponsoring, Yemen-conquering, Israel-loathing, theocratic terror regime is a dicey proposition.

The deal that seems to be taking shape right now does not fill me—or many others who support a diplomatic solution to this crisis—with confidence. Reports suggest that the prospective agreement will legitimate Iran’s right to enrich uranium (a “right” that doesn’t actually exist in international law); it will allow Iran to maintain many thousands of operating centrifuges; and it will lapse after 10 or 15 years, at which point Iran would theoretically be free to go nuclear. (The matter of the sunset clause worries me, but I’m more worried that the Iranians will find a way to cheat their way out of the agreement even before the sun is scheduled to set.) …

This is a very dangerous moment for Obama and for the world. He has made many promises, and if he fails to keep them—if he inadvertently (or, God forbid, advertently) sets Iran on the path to the nuclear threshold, he will be forever remembered as the president who sparked a nuclear-arms race in the world’s most volatile region, and for breaking a decades-old promise to Israel that the United States would defend its existence and viability as the nation-state of the Jewish people.

And as Goldberg noted, three years ago Obama promised in one of Goldberg’s columns, “We’ve got Israel’s back.”

Goldberg in agreeing with Netanyahu also agrees that Obama, it appears, has failed to protect “Israel’s back,” when it comes to Iran.

If that was all Goldberg had written, it would have been great. But he wrote more.

Instead of blaming Obama for misreading his newfound friends, Goldberg opens the column blaming Netanyahu for “turn[ing] a moment in which President Obama should have been busy defending his pursuit of a nuclear agreement with a dangerous adversary into a stress test of the U.S.-Israel relationship.”

Except it wasn’t Netanyahu who did that. It was the Obama administration. One of the key arguments marshaled against Netanyahu by the White House and its cheerleaders was that the administration had been “blindsided” by the invitation to him to speak before Congress, turned out to be false, as Ed Lasky documented. More importantly, the story was shown to be false by a correction in The New York Times, which, for all practical purposes, has been acting as assistant White House press secretary regarding Iran.

Goldberg believes that Netanyahu and the Republicans are making the administration’s handling of Iran a partisan issue. But if they weren’t making noise about the deal, who would be? Goldberg is wrong, if Netanyahu was silent there would be a lot less discussion of the dangers of the emerging Iran’s nuclear deal.

Obama’s politicizing it – a scheme in which Goldberg has been knowingly or unknowingly complicit – has been successful in distracting the conversation from the dangers of the deal. But an unintended effect of these attacks has been to highlight the bipartisan nature of support for Israel and opposition to the administration’s negotiating tactics.

As the speech draws nearer and Obama’s defenders attack Netanyahu more, signs of the bipartisan support for Israel keep growing. Last week Netanyahu agreed to meet with Senate Majority Leader Mitch McConnell and Minority Leader Harry Reid after his speech. On Friday a bipartisan group of senators including Bob Corker (R- Tenn.), Robert Menendez (D- N.J.), Lindsey Graham (R- S.C.) and Tim Kaine (D- Va.) introduced legislation to force the administration to submit any nuclear with Iran to Congress for review. Obama has threatened to veto the bill. (Kaine has reportedly said that he will not be attending Netanyahu’s speech.)

For all the reporting about the growing distance between Israel and the administration and of Democratic criticisms of Netanyahu, the planned meeting and the introduction of the bill underline the bipartisan suspicion of the administration’s approach to Iran.

The real reason Obama is upset about Netanyahu is that Bibi will get more press than Obama will.

That and Bibi is a much more Eloquent speaker and Leader than Obama can or will ever be. So Obama is scared of the comparison.

I realize that ‘Rats have perfected the smear campaign, and that the majority of the electorate here is dumb enough to fall for baseless smears, but the constant harping on Bibi over this upcoming speech seems incredibly moronic. It has guaranteed a larger viewing audience for the speech, as well as greater press coverage. While most Jews here are dumb enough to vote anti-Israel and pro-Islamofacist, I would hope most living in Israel, at jihad’s Ground Zero, are smarter and more pragmatic. A speech that I don’t expect to be political, but rather focused on Israel’s survival, has now been primed to make Bibi look like the world’s greatest statesman.

Obama sides with the Muslims in their conflict with Israel .

Well, and their conflict with everyone else, including us.

Could Bibi’s speech be the moment that the masses finally realize that our Emperor has no clothes? I think it’s a distinct possibility.

No, 30% of our “masses” are semi literate idiots that cannot pick out their home state on a map.

The tell-tale here is in how simple and neat it would have been for Barracula to make the Bibi trip here a net positive for his administration.

All Barracula had to do was wonder out loud who in the world in this administration said something so dumb as to suggest Bibi was unwelcome here…maybe that the first he’d heard of it was in the Times. Then, roll out the red carpet for Bibi. FIXED!

But, nooooOOOOOOOooooo. Which makes Barracula’s loathing of Bibi AWFUL clear, and his “I got you back, Israel” BS about where he has put the White House steak knives.

The ineluctable bottom line is that Obama is both dishonest and evil.

Obama’s across the board intractable lies make him untrustworthy in any circumstance, especially with an Iranian handmaid by his side. #MichelleObama

Exactly! He lies whenever it suits his needs.

And don’t forget Huma, the Muslim Brotherhoodlem plant who whispered in Hillary’s ear for years at State.

You kan’t steal what I give away.

I gotta a million ovem….

As the copyright owner, do you mind spelling it Muslim Brotherhoodlum?

Nobody seems to beleieve the adminsitration – they really believe that Netanyahu giving a speech – or more precisely, because it was about this before – Congress even contemplating increasing sanctions on Iran, would ruin any possibility of a deal.

He;s being manipulated by Iran.

“He;s being manipulated by Iran.”

He’s on the side of the Iranians. No manipulation required.

He’s on the side of the Iranians.

And why should that be?

That’s a pretty ridiculous thing to say, and it’s not a more logical explanation.

“He’s on the side of the Iranians.

And why should that be?

That’s a pretty ridiculous thing to say, and it’s not a more logical explanation.”

To paraphrase the erudite Mark Steyn, if Obama was on the side of our enemies, what would he be doing differently?

Make no mistake, Obama has no use for Israel. Remember, he was good friends with William Ayers, pro-Palestinian, and Ayer’s wife who helped organize the flotillas that were blocked by Israel, as well as making a close friend of Edward Said, Columbia professor and rabid hater of Israel.

Obama views Israel the same way he views this nation; as colonizers who need to be taken down a notch, or ten.

It’s obvious, that’s why. Every thing he has done has resulted in increased power of the Iranians. Remember his remark about how “flexible” he would be after the election to the russkies? Do the Russians support Iran, why yes they do. Working out swell for the Ukraine also. He supported the muslim brotherhoodlems in Egypt, only the Egyptian military thwarted him on that one. Yemen, who’s in charge now? Iran. We were supposedly helping the old regime battle the subversives (bought and paid for by the Iranians). Right.

What do you find ridiculous? Obama is the first anti – American president in history. If you do not understand that you are not paying attention.

Obama is an idiot, but not everyone around him is. It’s not incompetence, it’s by design. What he is doing will guarantee the Iranians nuclear weapons. He, clearly, has no intention of stopping them, and that is the same as aiding them. Iran is the #1 terror sponsoring state in the ME. What else could you conclude?

What an utterly sad time in America when we are compelled to support other countries’ leaders over our own. I didn’t even feel that way during the Carter era.

Even Carter knew the Iranians were the bad guys.

I’d argue that even Obama knows that Iran is our enemy.

Either that or he needs some cover for his real goal, a nuclear Iran. Since those renewed “sanctions” have been in effect for 35 years and have done nothing measurable, there is no downside to renewing them. Iran is the #1 terror state in the world, set to get nuclear weapons. Do you really think Obama is trying to stop that?

I have been a sailor all of my life and one of things you learn when you are on a small boat is that you take nothing for granted and you ensure that all systems are good to go and that nothing is worn out or may fail BECAUSE that small boat is your entire world when you are on it. Netanyahu is like the skipper of a small ship and knows that he has only one chance to keep it safe. One huge wave can sink it as well as carelessness or incompetence on the part of its crew. Outside forces must be considered at all times and preparations for them must be made. Obama on the other hand has no such concerns. He can make mistakes, and he has, and suffer no immediate consequences. As long as the golf course is still intact he is happy. He can make a mistake on Iran and during his reign America will not be attacked by them. Bibi has no such assurances and in fact must consider Iran to be the wolf at the door. He has only this one chance to stop the imams and the annihilation of his country and all of its people. If he has to step on obama’s face then he will.

Obama doesn’t want to share the stage with Netanyahu because comparisons would be inevitable and Obama would be found lacking.