Will Obama run or pass at end of his 4th Quarter?

Will Obama run or pass at end of his 4th Quarter?

My column at The Daily Caller: Obama’s 4th Quarter may be a wild (un)constitutional ride! 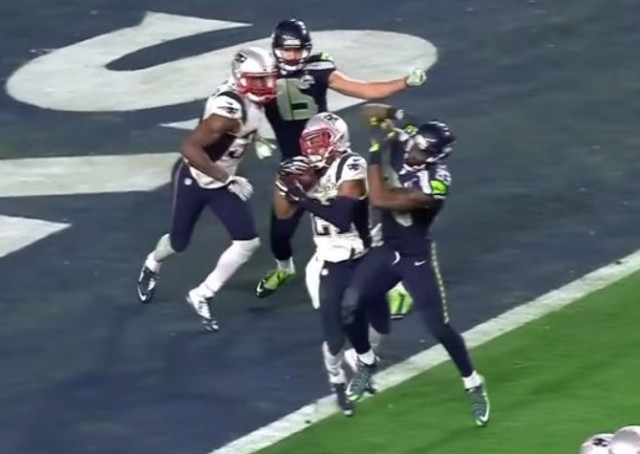 (This post is just an excuse to gloat over the Patriots’ victory, but please read on, there’s a point here someplace.)

Has there ever been a more exciting Super Bowl final quarter than the one we saw during the Patriots’ latest win?

First, there was the improbable, amazing, super-stupendous “what the **** just happened” catch to put the Seahawks on the verge of victory:

Then, there was Bill Belichek playing mind games with Pete Carroll by not calling a time out, which caused “the call” and “the interception”:

None of that compares to what Obama has in store for his 4th Quarter, via RCP:

In terms of my own job, I’m energized. I’m excited about the prospects for the next couple of years. And I’m certainly not going to be stopping for a minute in the effort to make life better for ordinary Americans. Because thanks to their efforts, we really do have a new foundation that’s been laid. We are better positioned than we have been in a very long time. A new future is ready to be written. We’ve set the stage for — for this American moment. And I’m going to spend every minute of my last two years making sure that we seize it.

Well, at least Obama called a time out, unlike, you know, Pete Carroll.

The constitutional excitement Obama has planned in his 4th Quarter is explored in my column at The Daily Caller, Resist Obama’s Fourth Quarter Constitutional Power Grab:

We know what Obama does when he is frustrated with Congress: He ups the class warfare rhetoric then goes it alone.

The past is prologue.

Expect Obama to push regulatory authority to the extreme, coupled with executive action. There will be court challenges and congressional disgust, but Obama will create facts on the ground that he hopes will never be reversed.

You know the drill for when I write elsewhere. I give you a taste, you head over to the link, read the whole thing, then share it via Facebook and Twitter.

We have practiced this; you know what to do, so do it. Otherwise, Obama wins.

If you were Obama why would you do anything other than pound it right up the middle until your opponent(s) prove capable of stopping you?

Bibi seems to have stopped him pretty good.

How ? Bibi did nothing.

Yes, he will violate the Constitution. Again and again.

There will be court challenges and congressional disgust, but Obama will create facts on the ground that he hopes will never be reversed.

The court challenges are far from guaranteed. Consider that 3 years ago, in theory Boehner filed a suit against Obamacare. Which has done absolutely nothing, nor has any part of it been heard. Last week Boehner promised that they were studying a plan to consider filing a lawsuit against Obama’s rule by decree. Which planning will probably not be completed before Crown Princess Malia becomes Regent in the Emperor’s dotage.

Even if any case is filed against the next usurpation and heard by an actual judge; the application of the law in Federal courts is now based on the hidden “Connected Persons Clause” of the Constitution.

And the level of “Congressional disgust” will be severely moderated by the Institutional Republicans keeping their eye on their main goal; preventing the Conservatives from opposing anything the Democrats do.

Merlin is spot-on, but the problem for the Teh Won is that he buys the hype (about himself) and is incapable of introspection.

As time runs-out for the big play to nail-down a legacy, he will reach too far and it will be too much for even the saner libs (the few, the proud) to stomach.

In the end: a fumble just short of the goal-line.

Surely with both houses of Congress and a MANDATE by 83% of the American people, conservatives! will exercise the will of the people and impeach Obummer for his high crimes.

Maybe the other team will finally decide to play defense.

With all the new judges he’s appointed I wonder if any of them will actually use the Constitution as the foundation of their rulings or if they’ll just agree that we no longer are a nation of laws.

Nope, they’ll all be like Loretta Lynch and insist that the law is now whatever Barry Obama says it is, no matter how ludicrous the underlying rationale for the “new” law is. (See, for example, Lynch’s embrace of Obama’s cynical distortion of the concept of “prosecutorial discretion” to justify suspending current immigration and employment laws for millions of illegal aliens, and replacing those laws with new, “improved” Barry Obama-created “directives” that create, out of thin air, all sorts of new rights and privileges for said illegal aliens.

As a lifelong Lions fan, I can say the only lion to ever appear in a Super Bowl was the one Katy Perry rode during the halftime show.

Well, let’s see. If he writes a book will it bomb like hillary’s book did?

What happens if Netanyahu’s speech gets lots of viewers?

Won’t Kerry show up with a p*ss plan? Will one of his carrots be an invitation to Bibi to visit obama in the white house?

It’s going to happen in the future. So we will be surprised.