Wife divorces husband for refusing to abandon Down Syndrome son

Wife divorces husband for refusing to abandon Down Syndrome son

He chose life and lost his wife 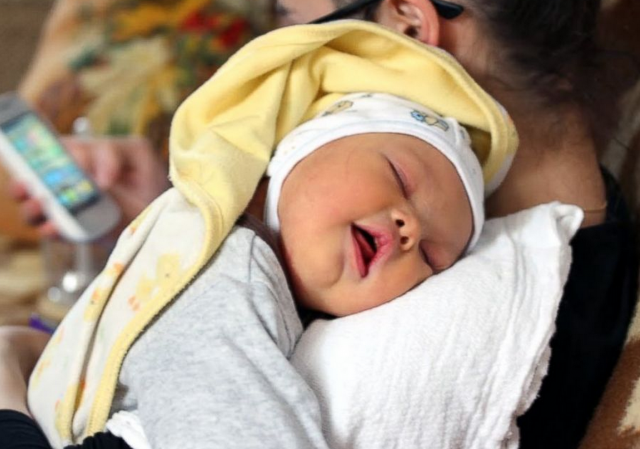 ‘Heartbreaking’ doesn’t do this story justice.

Ruzan Badalyan gave birth to a baby boy with down syndrome. She then gave her husband an ultimatum — he must choose her or the child. Samuel Forrest chose his son.

“This pediatrician walks out of the room with a little bundle — that was Leo,” Forrest said. “She had his face covered up and hospital authorities wouldn’t let me see him or my wife. When the doctor came out, he said ‘there’s a real problem with your son.’

Forrest followed doctors and nurses into a room where he’d finally get to meet his baby.

“When I walked into the room they all turned to me and said ‘Leo has Down syndrome,” he told ABC News. “I had a few moments of shock.”

After the news had sunk in, Forrest held Leo for the very first time.

“They took me in see him and I looked at this guy and I said, he’s beautiful — he’s perfect and I’m absolutely keeping him.”

Soon Forrest walked into his wife’s hospital room with Leo in his arms.

Her reaction was unlike one he ever expected.

“I got the ultimatum right then,” he said. “She told me if I kept him then we would get a divorce.”

Attempts to reach the hospital for comment weren’t immediately successful. The baby’s mother, Ruzan Badalyan, told ABC News that she did have a child with Down syndrome and she has left her husband, who has the child, but she declined to elaborate.

Forrest, who’s from Auckland, New Zealand, said he was completely unaware of the hospital practices in Armenia when it came to children.

“What happens when a baby like this is born here, they will tell you that you don’t have to keep them,” he said. “My wife had already decided, so all of this was done behind my back.”

I don’t want to know what happens to the children whose parents don’t make the decision Forrest made, but my heart breaks for them.

Despite his wife’s warnings, Forrest said he never had a doubt in his mind that he would hold onto his son.

One week after his birth, Leo’s mom filed for divorce.

“It’s not what I want,” Forrest said. “I didn’t even have a chance to speak with her in privately about it.”

Forrest, who works as a freelance business contractor, has plans for he and Leo to move to his native country of New Zealand where he said they’ll receive support from loved ones.

Forrest is not resting on his laurels. He’s launched a GoFundMe page to raise enough money to be able to stay at home with his son for the first year of his life. Forrest is working with local disability awareness groups, hoping he can help educate parents about children with special needs.

Our thoughts and prayers are with Forrest and his baby boy.

In Enemy of the State Will Smith is shopping for his wife and says to the clerk something like “I don’t want to look stupid. Ooops, too late.”

“I don’t want to know what happens to the children whose parents don’t make the decision Forrest made, but my heart breaks for them.”

The bell can’t be unrung you have asked the question. Inquiring minds want to know, what does happen to babies the hospital has determined undesirable, that the parents don’t want?

A few months ago, on a bright sunny Sunday afternoon, I stopped on my way home at one of the largest abortion providers in the country. As I walked up and down praying the Rosary and vehicle from the county sheriff’s office showed up to watch. These people know they are doing evil.

Read a few years ago now about an American nurse in China observing their medical practices. Aware that Chinese women tend to have births at older ages, increasing the probablity of a Downs Syndrome child, she asked how the Chinese wer planning on handling the increasing numbers of Down Syndrome adults. After some confusion about what she was talking about, one of the nurses finally realized what she was talking about. “Oh, those babies never leave the delivery room.” was the straightforward answer. They had no plans, for they had no problem…

Once they are born, there are plenty of people who will adopt special needs babies. One agency, The Cradle in Evanston, IL, has a 100 percent record of placing babies who have special needs, debilitating illnesses, you name it, with parents all over the country. The hospital social workers will work with birth parents if they do not feel they either are able or want to parent these childen.

How embarrassing that on Resurrection morning there will be more folks rising from the landfill than most cemeteries.

Abortion is just another way for the Liberal worldview to express itself: “I am god” over life and death, over all I encounter. It’s just tyranny on the most basic of scales, the life of a child murdered in it’s mothers womb. What a rude shock they’ll be in for.

About the ‘mother’ who deserted her child and husband because the baby did not meet her expectations of worthy. She is the one not worthy to have either the baby nor the husband – a dry husk of humanity.

How quaint! If you truly believe that life begins at conception, then you must also understand that not all fertilized eggs successfully implant in the uterine wall. The fertilized egg can be sloughed off along with the uterine cells with the next menses. So, will all those tampons and sanitary pads be floating out of those landfills as well?

I’ve already got my own medium-sized DS bundle. He makes me and all around him happy.

I think Mr. Forrest is fortunate to have gotten rid of the wife.

I imagine that some women who read the story will want to get acquainted with Mr. Forrest and his son.

Yeah, especially since there’s almost $500,000 in the gofund thingy.

Why so cynical? Most women want a man who doesn’t abandon his own children. Women who just want a guy with money would look for one who doesn’t have a Down syndrome child.

God bless you Samuel and Leo! “Samuel Forrest chose his son.” Samuel you have overcome evil with good!

Samuel is a Hebrew name which means G-d has heard; G-d listens.

Samuel and Leo, you are both are precious in his sight! God has heard your prayers and your concerns and he will care for both of you.

First, it must be noted that the mother made a choice to not abort her child’s life. Finally, the father must be congratulated for accepting responsibility for his child under trying circumstances. The mother was good. The father is better. The child is fortunate to have her as a mother. He is blessed to have him as his father.

That said, the mother still has an opportunity to act/ask for forgiveness. Perhaps her lapse in judgment was caused by momentary insanity. I imagine the situation would be overwhelming. Good luck to the father and child, and hopefully the wife and mother will recover her balance.

This took place in Armenia, they don’t have as liberal abortion laws as the US does. She may not have had a choice.

From the article, it sounds like they didn’t know beforehand.

A woman can always contract for abortion service or commit the act herself in the “back-alley”. In the first case, there will always be someone who will do it for money. In the second case, it’s improbable to predict a mental break.

Did I miss something? I don’t think the mom knew the baby had Down Syndrome so she didn’t have a chance to make that choice of an abortion. She should be ashamed of herself. The child is very unfortunate to have her as a mother because she doesn’t want him because of his disability. How can you say she is good? Good luck to the father and son. Good riddance to the selfish piece of trash that gave birth to him?

The motivations and consequences of aborting a child and abandoning a child should be considered and treated separately.

BS. The woman didn’t know the baby had DS. She abandoned her own child for this reason. Not having an abortion doesn’t make her “The mother was good.”. Only the father has any claim on good here.

Hey, in this wonderful age of equality, his wife will of course be paying Alimony and Child Support…yes?

God will continue to bless those two, and I pray that the wife will someday be forgiven for abandoning her newborn.

She will ultimately regret her decision to leave, I suspect.

I had a conversation with my wife while she was pregnant. I wondered why hospitals and doctors performed so many expensive tests to determine if the child was “healthy”, as if there was a personal “option” to us if our child was not.

“‘Heartbreaking’ doesn’t do this story justice.”