Obama chooses to shut down dissent 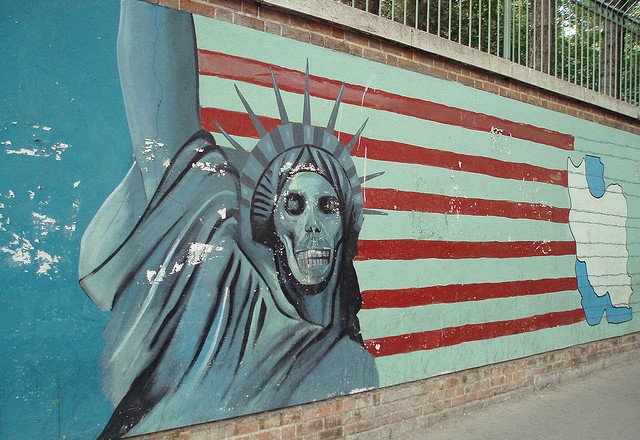 An effort last week to marshal Congressional Democrats to urge House Speaker John Boehner to delay Israeli Prime Minister Benjamin Netanyahu’s Congressional speech next month gained the support of only 23 out of 188 House Democrats. There is more than one way to explain this. Here’s administration defender Greg Sargent of The Washington Post.

Some House Democrats have circulated a letter calling on House Speaker John Boehner to delay the speech, on the grounds that it represents a partisan effort by Republicans to enlist the help of a foreign leader in scuttling one of the President’s chief foreign policy goals, i.e., reaching a nuclear deal with Iran, which Netanyahu bitterly opposes. … All in all, the failure of more Democrats to sign this letter suggests many still fear the politics of appearing out of sync with whatever Israel wants. It’s true that a number of Democrats have said they will skip the speech. But many of those have clarified that this isn’t due to any organized boycott, and far more are attending. And, really, all the talk of a “boycott” is misdirection. It shouldn’t be all that difficult for Democrats to call for a mere delay in this speech, while rebuffing efforts to portray such a move as “anti-Israel,” given how egregious the circumstances surrounding this event really are.

(It’s important to note that Sargent quotes a poll showing that most Americans are unhappy with the way the invitation was extended – i.e. dissatisfaction with Boehner’s actions, other polls show strong American support for Netanyahu speaking.) Not surprisingly Sargent uses his cherry-picked data point to point out the the big bad Israel lobby as the culprit.(In blaming the pro-Israel lobby, Sargent took a page from the playbook of President Obama who, last month, according to The New York Times, effectively accused Sen. Robert Menendez of not loving his country enough, “The president said he understood the pressures that senators face from donors and others, but he urged the lawmakers to take the long view rather than make a move for short-term political gain, according to the senator.”)

Of course there’s an important data point that Sargent left out of his critique. Here’s how the Associated Press described the Representatives who signed the latter: “Generally speaking, the lawmakers who signed the letter are among the most left-leaning Democrats.” In other words the letter was mostly supported by the fringe of the Democratic party. Instead of identifying the President and his supporters of being out of step on Iran policy, Sargent tries to do that with Democrats who are in sync with American opinion about Iran.

There’s another way of looking at the Democratic reticence for supporting the administration on Iran: Israel’s arguments are valid. That’s the upshot of a recent David Ignatius column. In the column, Ignatius interviewed Israeli minister Yuval Steinitz. Steinitz in a few sentences explained the Israeli position, effectively arguing that the deal currently under discussion would leave Iran in a position for a nuclear breakout in “in two or three or four years,” when the West’s attention is elsewhere leaving insufficient time for an effective response. He also punctured an apparent assumption of the administration that in ten or fifteen years, Iran would have a more moderate leadership. Ignatius, who acknowledged being in favor of the administration’s diplomacy nonetheless concluded that the administration and those in agreement “need to be able to answer Steinitz’s critique.” (Elder of Ziyon took a less generous view of Ignatius’ column.)

Iran is moving so quickly now. Three weeks ago Israel destroyed an Iranian-Hezbollah convoy on the Golan Heights, and now the IRGC is back in Quneitra. You can bet that’s going to be one of Netanyahu’s bullet points, Obama’s thinking. Christ, what if he brings one of those drawings to Capitol Hill, like he did when he spoke at the U.N. General Assembly in 2012? What’s it going to be, a map of the Middle East with Iran now owning an enormous chunk of it? No, I see it now—Bibi’s going to hold up a big “Black Friday” sign. Yeah, the Iranians think U.S. policy is like a big fire sale, Black Friday, and they’re just going to keep shopping while the price is right. And that’s the fear that’s really eating at the president, and why the White House is taking it out on party loyalists like Menendez as well as enemies like Netanyahu—that Iran is going to get half the Middle East along with an atom bomb and the president isn’t even going to get a photo op. … Obama made Ayatollah Khamenei a pen pal in order to win his trust and his favor, at which point the Iranian leader would doubtlessly do him a solid in exchange for talking nice and easing off sanctions. But now Obama sees that his glad-handing doesn’t matter, because the supreme leader has taken his measure these last five years and knows that the Americans won’t do a damn thing to stop him—and the carrots alone aren’t worth the price. The diplomatic fan-dance on which Obama staked his legacy in the Middle East turned out to matter much more to the American president than to the Iranian regime—whose legitimacy rests on resistance to America and to the West. The price that Obama thought was reasonable—sign a piece of paper and smile for the cameras—was simply not a price that Khamenei has proven willing to pay. Why pay something when you can pay nothing?

Instead of having an informed debate over the risks of the administration’s nuclear negotiations with Iran, President Obama and his defenders prefer to insist that they are right – in denial of the evidence to the contrary – and demonize anyone who would disagree.

This past week has brought new vistas of the detachment from reality that is the Obamic Decline. The landscape painted by the Obami is alarmingly surreal…a real Dali work.

Iran has been at war with the U.S., and more broadly the West, for decades. And, like his fantasy of “ending the war in Iraq”, Obama wants to end the war with Iran by saying it is ended.

This is as bizzare as suggesting ISIS needs a jobs program and spiffy social media warfare, and is “un-Islamic”.

But it is utterly consistent with the Collectivist world-view in which Barracula was steeped all his life, and which cocoons him now. He has nobody who can call him back to reality, and that is because he would not tolerate any such person or their counsel.

And not just declare the war with Iran ended, but to hand them a ticket to the Nuclear Power Club as his parting shot. Some would argue this is treasonous behavior.

I think Boner should invite someone from Egypt and Saudi Arabia to speak as well. All three will strongly agree that Iran should not have nuclear capabilities. If Iran wants enriched uranium for energy purposes only, then we should offer to provide as much as they need but no centrifuges!

Of course the democrats could step out character and do what is right, not what is politically expedient.

Here is a simple but very important concept… Israel is our friend. Iran is not.

After all those years of yelling, screaming and gnashing of teeth by Democrats claiming that Republicans are trying to shut down debate, we have this spectacle.

It’s almost as if somebody is afraid of the truth.

Iran has approximately two years left to produce the “bomb”. And obama will do everything in his power to make sure it occurs. The evidence is very clear.

What will be the breaking point for Obama to officially say that Israel should not be our ally, is when Israel finally has enough and takes the 5th strongest military on the planet and decided to employ it to stop Iran.

If the Obama administration didn’t have its alternate reality in the Middle East, it would have no touch with reality at all.

If it didn’t have its gullibility, it would have no ability whatsoever.

And without Netanyahu coming to speak, it would have no opportunity to display its Churchillian resolve.

“Whatever the cost may be … we shall be passive-aggressive to the end … we shall never surrender … to Israel.”

That. That is the perfect epitaph for the Obama administration. 🙂 Roll on 2016!

You have to remember that you are dealing with people who believe that if you liver further than a couple of hundred miles from the east or west coast that you are an uneducated, racist, bigoted lout.

Perhaps some Democrats are beginning to realize that Obama is a lame duck, and I imagine there are more than a few who secretly question his motives. How could true Americans not have serious doubts watching this boob systematically dismantle our country’s security. His dislike of Israel is certain. But, no one will say anything because. . . racism.

Obama was lame from the start. Most Conservatives knew this but thanks to the liberal media and establishment Republicans we were screwed from the start.