Pipelines are a safer alternative. 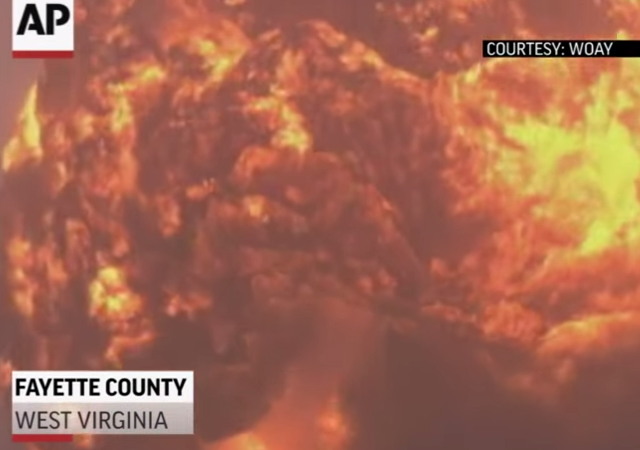 Here’s a report from the Associated Press via the New York Times:

Oil from North Dakota’s shale fields was still burning in West Virginia a day after a train carrying more than 3 million gallons of crude derailed in a snowstorm, shooting fireballs into the sky.

Hundreds of families were evacuated and nearby water treatment plants were temporarily shut down after 19 tanker cars left the tracks and caught fire, leaking oil into a Kanawha River tributary and burning a nearby house down to its foundation.

“There’s nothing there,” said Democratic U.S. Sen. Joe Manchin, who toured the scene. “All you can see is a couple of blocks sticking out of the ground. There’s some pickup trucks out front completely burned to the ground.”

The flames caused by the crash were unbelievable:

The accident has revived the debate over the Keystone XL Pipeline, a mode of fuel transport proponents claim is much safer.

The derailment of a train in West Virginia that sent flames soaring and at least some of the 3 million gallons of crude oil onboard into a Kanawha River tributary has prompted a renewed call for the approval of the Keystone XL pipeline as a safer alternative to rail transportation.

Daniel Kish, an Institute for Energy Research vice president, said Wednesday that trains remain a safe way to move oil and that the U.S. rail industry has met the demands of the recent domestic-energy boom.

But he said underground pipelines are safer.

“Any time you make more trips — whether it’s trains, trucks or buses — accidents increase,” he said. “I’m not trying to scare people. But the records show that if you move more stuff there will be more problems.”

Democrats call themselves the party of progress yet they cling to trains, a mode of transport which enjoyed its heyday in the 19th century.

Obama will ignore this accident and make sure that the pipeline is not built. If we could build the pipeline and sell the oil on the world market it would put out of business the terrorists who sell oil.

No, darlin’. That is NOT how markets work.

And terrorists…and anybody else who has a commodity to sell that is in sufficient demand…will find willing buyers. But it would be nice if it wasn’t necessary for the U.S. to purchase any oil produced outside our territory.

The pipeline would also give us more direct control over Canadian oil.
🙂

Apparently Boehner hasn’t decided whether to accept the Senate version as is or form a Conference Committee.

We have pipelines all over this country already, because they are safer and more economical than any other method of transport. The opposition to this pipeline is specious to the extent it is based on environmental arguments.

“The accident has revived the debate over the Keystone XL Pipeline, a mode of fuel transport proponents claim is much safer.”

That depends on what your definition of ‘much safer’ is.

Oil trains spill twice as frequently as pipelines.
But the average pipeline spill is three times worse then the average oil train spill. Some of the pipe line spills have been MASSIVE: the 800,000 gallons of Canadian tar crude spill in and around the Kalamazoo; and the 63,000 gallon pipeline spill into the Yellowstone River. The Yellowstone River spill contaminated the water supply as far as 10 miles away. Those are just two of MANY pipeline leaks over the past few years.

Overall I’m in favor of finishing the pipeline — it will reduce the dependance of imported oil from Venezuela or Nigeria. But to claim the pipeline is safer then rail transported oil is a red herring. So is the claim it will provide continuing jobs for Americans after its completion: in fact it will diminish the number of jobs for Americans who now work transporting oil via rail and the highways.

I will see your 800k gallons and raise you by 500k more.
You can explore the data and play around with the map at the bottom of the original McClatchy piece.

The McClatchy report doesn’t factor any of the spills that have already occured in 2014, nor derailments that occur north of the border in Canada, like the fatal Lac-Mégantic explosion in August.

Within the past year – and indeed the past few weeks – North American tracks have experienced a number of very high profile – and, again, in some cases fatal – crude-by-rail derailments, explosions, and spills. Here’s recent DeSmog coverage of some of the worst and most recent:

In August, a runaway oil train tragically exploded in Lac-Mégantic, Quebec, releasing an estimated 1.58 million gallons of oil and killing 47 people.
In March, a Canadian Pacific Railway train jumped the tracks and spilled roughly 30,000 gallons of tar sands crude in western Minnesota.
In October, a train carrying crude oil and liquefied petroleum gas derailed west of Alberta, Canada, causing an explosion and fire.
In November, 20 cars of a 90-car train carrying Bakken crude derailed and exploded in western Alabama,
On December 30th, a 106-car oil train slammed into another derailed train in Casselton, North Dakota, exploding and sending a massive mushroom cloud hundreds of feet into the sky, and forcing the evacuation of hundreds of local residents.
Earlier this week, a train carring Bakken crude across a Philadelphia bridge derailed and dangled precariously over an expressway and the Schuylkill River.

Well, we can always count on you to republish the moonbattery talking points like a good lil’ Collectivist tool.

And the ratio of spills…according to other DATA…is more like 6:1.

But, using your stupid BS from Thunk Progressives, anything TWICE as safe is still pretty good.

You should seriously read a story before you copy-paste your liberal bullshit. Not to mention your little Wikipedia link being 100% worthless (even more worthless than a Wikipedia link normally is) because almost none of the leaks have actual numbers attached to them – probably because when you look into the ‘leaks’, they were generally a few hundred gallons.

Your numbers just prove how intellectually dishonest you are.

This train was carrying THREE MILLION GALLONS of oil. Right now they literally have no idea how much went into the river. This single incident completely eclipses the amount of oil spilled from every single pipeline in the US for decades.

Your ‘massive’ pipeline spill is less than 1/4 the oil carried on this single train. And the other one, 63,000 gallons? That’s doesn’t even fill up 2 tanker cars on a train.

That’s a lefty/warmy/crazypeople blog. They’re not pointing out those spills because they’re wanting to show that pipelines are safer; they’re doing it to further their narrative that Oil Is Bad.

Check the two posts right before and after that post. One is railing against “KOCHTOPUS CLIMATE DENIAL!!!” and the other is an anti-fracking piece bragging that their activism got a screening of the doco FrackNation cancelled.

pipeline won’t reduce rail shipments.
pipeline doesn’t go to east coast refineries.
the pipeline should be built, trying to use reduction in rail traffic as a reason is foolish.
does anyone actually follow freight rail industry?
seems people on all sides just spew whatever seems to fit the moment.

any loss in bakken oil (the stuff in question) to rail offset by increase in shipping to refineries from pipeline endpoint as well as offset by rail shipping supplies to build the pipeline.

rail and pipe augment each other here.

and jj66 is not wrong, pipeline reporting criteria different also, if a locomotive leaks rail is obligated to report at 10 gallon mark or so. the figures (from all sides) not as cut and dried as they seem.
I’ve been certified as hazmat responder and shipper and know how hard it is to get true unbiased data.

build the pipeline (how many know much of it is already built and running?)and keep people off the rail right of ways. and if you build a house next to a rail line stop complaining, rail was there first usually.

Dems cling to trains because Warren Buffett and Soros have money in railroad lines.

True, but Buffet and Soros are in freight, where rail makes sense, whereas most liberals are more about moving people with rail, which is beyond stupid.