Wage equality is only a problem for Hollywood, the White House, and Hillary staffers

Wage equality is only a problem for Hollywood, the White House, and Hillary staffers

Cry us a river 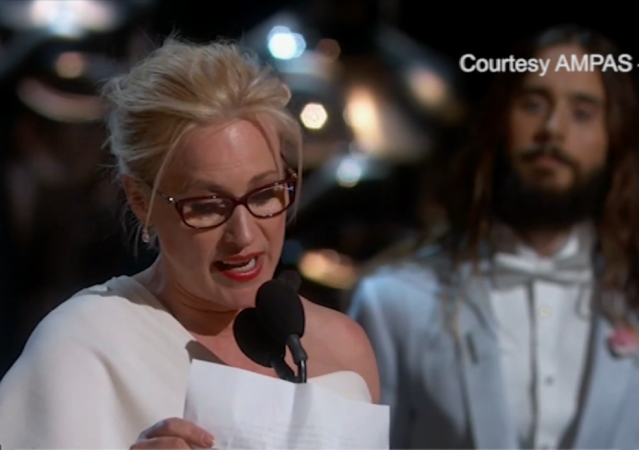 You gotta love the Oscars. It’s one of the best nights to watch Hollywood revel in its self-importance. As customary, at least one award recipient had to wax poetic about something political.

Winning Best Supporting Actress for her role in Boyhood, Patricia Arquette took the opportunity to make a pitch for wage equality.

“To every woman who gave birth, to every taxpayer and citizen of this nation, we have fought for everybody else’s equal rights. It’s our time to have wage equality once and for all and equal rights for women in the United States.”

Arquette’s pitch for equal rights may have been relevant in 1869, but hardly seems to resonate in 2015 — the age of the stay at home father. Not to mention that when celebrities complain about wage equality, they’re squabbling over a discrepancy of millions when most Americans won’t see that much cash in a lifetime. At least Arquette got a rise out of Meryl Streep (who looked fabulous, by the way).

Wage equality is a long debated issue. Economists consistently prove it doesn’t exist, liberals refuse to accept the science (it’s an irony to be enjoyed). Beneath the rhetoric and over politicizing of the wage equality myth, there are a few facts that are worth considering.

“It’s time to have wage equality!” I agree, and so did Congress. In 1963. The Equal Pay Act of 1963 “prohibits discrimination on account of sex in the payment of wages by employers engaged in commerce or in the production of goods for commerce.” See also, Title VII of the Civil Rights Act of 1964.

Numerous studies indicate there’s actually no gender wage gap. Most studies that have concocted some type of gap do so by omitting salient variables from the equation; chosen major (engineering, a male-heavy field tends to pay better than education, etc.), married vs. unmarried, prior work experience, etc. Factor those variables in and poof! according to the Foundation for Economic Education, the mythical gender wage gap virtually vanishes.

So that’s the private sector at large. But what if you work for Hillary Clinton? If you’re a woman working for Mrs. Clinton, you can expect to be paid 72 cents on the dollar compared to your male counterparts.

Jessica Chasmar of The Washington Times weighs in:

The paper’s analysis excluded the salaries of employees who were not part of Mrs. Clinton’s office for a full fiscal year, which runs from Oct. 1 to Sept. 30, and Mrs. Clinton’s first year as senator, which began Jan. 3, 2001, was also not included for that reason.

And the White House doesn’t fare much better. There, women staffers are paid on average, 18% less than men. More troubling is that the White Houses gender pay gap actually increased between 2009 and 2011, from 13% to 18%. The Washington Free Beacon explains:

The pay gap was even higher in 2011. The Washington Free Beacon previously reported that female employees earned a median annual salary of $60,000 that year, which was about 18 percent less than the median salary for male employees ($71,000).

Democrats who often champion equal pay legislation have been known to be the worst offenders of gender pay discrimination.

Hollywood too, seems to have trouble with gender wage disparities. Forbes lists Sandra Bullock as the highest paid female actress in Hollywood, earning $51 million. Meanwhile, Robert Downey Jr. is the highest paid male actor, earning $75 million last year. As I’ve mentioned before, this is likely due to numerous variables as well. Such as Downey hooking up with the Marvel franchise, etc.

But the rest of us? I think this adequately sums up our thoughts on the matter:

As she says in Boyhood, “Why don’t you say goodbye to that horse—t attitude?”

Arquette is a stupid scrunt.

On her movie set, did she make more than the cameraman and key grip did? Was it because her job was more important? Required rarer skills? Contributed more to the success of the project?

Well, that is precisely why those women in the marketplace are paid less, too.

Bet the cameramen on her movies and new TV show would be ecstatic to make 77 cents for every dollar she brings down.

I agree with Hollywierd.

Everyone in Hollywood makes way too much money!

Everyone in Hollywicked should make only mininum wage.

Chew on this for a long while….. Hollywood and its “employees” have made billions and trillions of earnings due to Un-equitable tax deductions and tax breaks.

What sickened me more was the fervent applause her sanctimonious speech received from a bunch of Hollywood hypocrites.

Did anyone else catch John Legend’s comment on how black voting rights were being oppressed today?

Six out of 10 of the richest counties in America are within the DC Beltway. That is the definition of Income Inequality.

Every INEQUALITY Democrats whine about, is either a lie, or has been made worse by their own policies. —Pundit Pete

I’ll pay attention when they demand that women be drafted for the next 25 years to partially make up for all the time men were drafted (and are still required to register) while women were not.

Women only talk about equality when they feel it will provide them a benefit, but when being equal to a man means they might have an additional responsibility, like draft registration: Crickets!

There was a broadcast? Isn’t that sexist?????

I hear Oscar Meyer, the meat packing firm, is suing the Acaademy Awards. They say the Academy is pushing tainted, diseased product and giving Oscar Weiners a Bad Name!

Wage equality starts with one-percenters like you, Patricia Arquette! Where are the Occupy Wall Street goons, now that we really need them?

Mark Levin ripped the Hollywood Hyper-Hypocrites good on how they consume most expensively of all humans on the planet.

However they don’t want to change their in-equitable earnings and consumption. They want us peons to make all the scarfices.

BTW: Legal Insurrection got a shout-out on the Rush Limbaugh show today.

Well, equal rights for everyone except the authors of books they adapt. Seems there are never any profits.

Since when have women “fought for everybody else’s equal rights”? Women’s groups fight only for their own benefit and are quite happy to throw both children (but not before using them as the proverbial bloody shirt) and men under to the bus to do so.

Or how about we all join a group called “Das Rennen” (The Race in German… you know, kinda like La Raza)? Do you think we could get federal grant money?

Or if our congress critters started a “Congressional White Caucus?”

You get the idea…. prog drones are a bunch of hypocritical bitches and liars.

NAAAOC is a great idea. I hope you don’t mind if I steal it. I gonna rename my tea party and if that flies, I’ll incorporate it and sell franchises.

It’s all about the benjamins,

I honestly have never heard the name Patricia Arquette before. I looked up her movies on IMDB and never heard of any of them either (except the Freddy Krueger one). Probably why she is whining about income inequality, being one of the B-list Hollywood elite and all.

Not A Member of Any Organized Political in reply to buckeyeminuteman. | February 24, 2015 at 4:03 pm