Man fatally shot when he points hands at officers as if holding weapon. 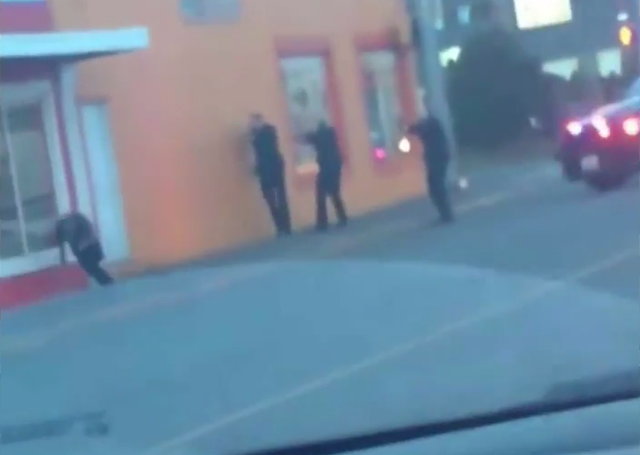 The old quip in self-defense circles is that it is imprudent to bring a knife to a gunfight. This caution must apply only more certainly to the bringing of a rock to a gunfight, a lesson learned the hard way by one Antonio Zambrano-Montes after he was shot and killed this past Tuesday by the Pasco, WA police department, as reported by CNN and other news sources.

Police were called after reports that Zambrano-Montes was at an urban intersection hurling rocks at vehicles. When officers responded, they too began to be pelted with stones as large as softballs, with officers being struck multiple times.

Police say that they attempted to use various degrees of non-deadly force, including voice commands and a taser, but that these efforts were unsuccessful. Events were escalated to imminent deadly force against the officers by Zambrano-Montes.

The video above, apparently captured on a cell phone by a driver in a nearby car, shows Zambrano-Montes with his arm raised ready to throw a stone at an officer only a few feet away. Zambrano-Montes winds up for the throw, and the officer begins to scurry away, crouched over to protect his head from fatal injury. The stone is thrown, and a moment later (at the 4s mark in the video above) several police fire an apparent total of 6 or so rounds. The rapidity with which the shots were fired indicates the officers already had their guns unholstered and ready to engage.

These shots either missed or were poorly placed, as Zambrano-Montes begins to run (rather slowly) across the street and down an adjacent sidewalk, with several officers in pursuit.

As the officers close in on Zambrano-Montes to within 10 feet or so, he suddenly turns and moves his hands from his waist and towards the police officers, in a motion identical to what would be expected if he had retrieved a pistol from his waistband and was pointing it at the officers (at the 19s of the video).

At this point the officers officer fire again, in greater volume and with apparently improved shot placement, putting Zambrana-Montes down on the sidewalk. He never appears to move again.

Protestors gathered to march the following day. Among their claims for outrage are that Zambrano-Montes did not speak English and therefore would not have understood the officers’ commands–as if one needed to speak English to understand it is unwise to throw stones at officers pointing guns at you–and that “it was only a rock”–as if a softball-sized stone thrown at one’s head from a few feet away does not represent a imminent deadly force.

As must be expected, the left-wing media has already begun to weave the event into the greater narrative fabric of past shootings. The Guardian, for example, writes that “Seconds before the shooting, it appears that Zambrano-Montes momentarily raises his hands in the air.”

They seek to suggest a motion clearly indicating surrender, a characterization clearly belied by the actual video. Indeed, Zambrana-Montes was “merely surrendering” when thrusting his hands out at the officers in much the same way Marissa Alexander was “merely firing a warning shot” when she sent a bullet inches past her husband’s head.

The Pasco police department has brought in outside law enforcement agencies to investigate the shooting, as has become the standard practice for such events, with the results to be reported back to the Franklin County Prosecutors Office to determine if charges should be brought against the three officers who fired.

In addition, Franklin County Coroner Dan Blasdel has indicated that his office will exercise the option of conducting a separate inquest involving six community members, following the completion of the criminal investigation.  This inquest is not required, but Blasdel says he intends to conduct it because it “takes the burden off the law enforcement and puts it in the hands of the citizens, and puts the facts in public.”

Keep your eyes here at Legal Insurrection for more coverage as additional facts and events occur.

What fails to be mentioned, is the one llpossibly legitimate complaint against the police. The shots in the first volley may be fired into a crowd.

I don’t know if it is clear enough from the video to condem the officers for it though.

BTW because they are leftists, I suspect none of them heard of Goliath, though technically he was killed by a sword not a stone.

Makes you wonder whether his intention was “death by cop”.

That was my thought…suicide by cop. But, unless he left a suicide note, that may never be known.

Some witnesses reported that the man screamed “shoot me, shoot me” after he turned and faced the officers. Could have been a taunt or could have been a sincere desire to be shot.

“Why didn’t they just shoot him in the stones?”

(I know… I repudiate myself…)

LOL…you should repudiate yourself… 😉

On a serious note, I’m no doubt late to the ball game, but where have I seen the idea lately, that today we lock up in prison bunches and bunches of people who in the past we locked up ‘in institutions’, so to speak?

More often, they are street people, and that started way back (seems like) in the Reagan era when “main-streaming” the mentally ill became a vogue among the Collectivists.

the de-institutionalization of the mentaly ill was initiated by the late mario the pious of new york, i believe. you see, all the lunatics were to be housed in community group homes where they would take their meds and live in equality with the sane and productive. well they didn’t take their meds and we all know how that progressive policy has worked out.
but of course, they meant well

I can’t help myself. The fact that the left is up in arms over this suggests to me the cops acted appropriately.

Yeah, Mumia and all that happy horse crap.

He sure sounds 12 bottles short of a 6-pack.

I’m not going to get too worked up over a tax payer relief shot, but that last second could have gone either way from the side vantage point. I’d like to see go-pro video from the cops angle.

Either way, I’d side with not second guessing the cops. The dude was tossing rocks at cars and then at cops. What kind of ending did he have planned for this day?

Was this a US citizen or one of those people doing jobs that Americans won’t do?

The left never wants to acknowledge that throwing stones that size is a use of deadly force, look at the way the palestinian thugs were shown as mostly peaceful during the various intifadas. Their use as a way to execute people in the middle east is beyond well documented. A softball sized rock is a deadly weapon period end of report.

Well, on the up side, he doesn’t have to live in Pasco any more.

As a WA state resident, I am appalled at your Pasco comment. Well, not exactly. I will be appalled — if I can ever stop laughing at the naked truth of it.

Stupid generally has a price.

Why is it every time there is a new story about police or a private citizen having to use deadly force to defend themselves that the “media” picks up on I feel like their reports should be accompanied by calliope music?

Well, probably because it should be accompanied by a calliope….towed by a nattily attired Indian elephant and followed by clowns, midgets, sword swallowers, magicians and fire-breathers. The cops get to be the tight-rope walkers.

A rock the size of a softball would weight about six to eight pounds.

A softball weighs 7 to 9 ounces.

He must have been a shot-put athlete in his past if he was getting any distance or velocity, or he had an arm like Roberto Clemente.

The sympathy media is showing Montes reminds me of whattook place when Illinois Park Forest Officer Craig Taylor shot and killed John Wrana with non lethal bean bag rounds.The media narrative was How could 95 yrold Wrana,who fought for our country survive Burma,fought the japanese deserve to be killed like this? Answer.The old buzzard was being a menace to society.He was acting violently in a nursery home. That’s why police were called. Instead of following police instructions Wrana decides to wave a cane,shoe horn ,knife in a threatening manner.Plus the taser misfired. So Off Taylor fearing forhis life and the life of other cops shoot himwith beanbag rounds. Wrana dies at the hospital. Off Taylor however is charged with causing Wrana’s death. Now why was Off Taylor indicted when so many other cops are not indicted in these shootings?Then I saw OffTaylor and the guy he killed Wrana. It became obvious why Taylor went to trial and other cops didn’t. The good news Off Taylor was cleared of all charges. Wrana had it coming. Wrana obviously lost any sense of honor the military taught him. Here are the links :

It is noted that the Tribune article was written by John Kass, usually known by the more informal name Jack.

Zambrana-Montez was an idiot. No matter what his intent, he caused his own death. In a rational world … case closed. In this world …???

He supposedly grabbed for a cop’s gun on a previous occasion, but we know from the Michael Brown case that that never happens.