The Senator from Arkansas speaks clearly about the Iranian threat 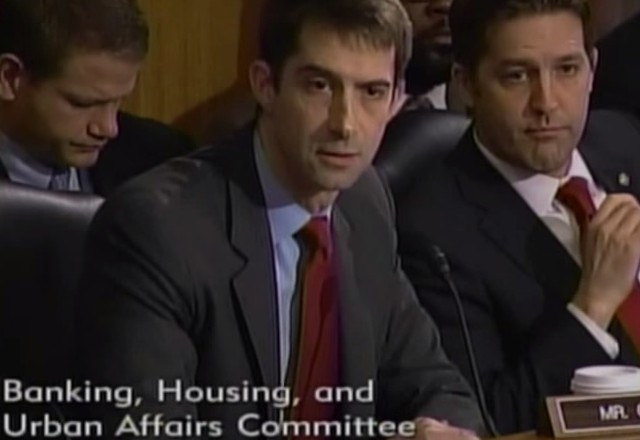 I wasn’t looking for anything more than a screenshot when I came across Senator Tom Cotton’s (R-Ark.) statement last week (embedded below) before the Senate Banking Committee. But when I heard him speak about Iran’s “…nasty habit with their proxies of killing Jews all around the world.” I made a mental note of the statement and went back later.

The statement was part of a larger argument against the nuclear negotiations with Iran, but what Cotton was establishing in stark terms is that Iran is America’s enemy. The enmity can be seen not only by its words but by its actions too:

“Iran is a radical Islamist theocracy whose constitution calls for jihad and its leaders have honored that constitution for 35 years, killing Americans in 1983, killing Americans in 1996 … having a nasty habit with their proxies of killing Jews all around the world, in Argentina, in Bulgaria, in Israel and most recently, controlling or exerting dominant influence over 5 different capitals in the Middle East, Tehran, Baghdad, Damascus, Beirut, and now, Sanaa…”

I assume this was a summary of the more extended argument Cotton made Friday in an op-ed published in The Wall Street Journal (Google link). After referring to Iran as America’s “negotiating ‘partner'” Cotton wrote:

In 1983 Iran helped finance and direct the bombing of the U.S. Embassy and Marine barracks in Beirut, killing hundreds of American military, diplomatic and intelligence personnel. Iran has also been implicated in the 1996 Khobar Tower bombings, which killed 19 American troops stationed in Saudi Arabia.

More recently and personally for me, Iran has been responsible for the killing and maiming of thousands of American troops in Iraq and Afghanistan. During my tour in Baghdad leading an infantry platoon, Iran supplied the most advanced, most lethal roadside bombs used against coalition forces. My soldiers and I knew that Iranian-supplied bombs were the one thing our armored vehicles couldn’t withstand. All we could do was hope it wasn’t our day to hit one. My platoon was lucky; too many others were not.

Iran also continues to terrorize the civilized world. It is the worst state sponsor of terrorism on the planet, according to President Obama’s State Department. Iran is a lead financier and arms supplier of Hamas, Hezbollah and Palestinian Islamic Jihad, terrorist organizations dedicated to destroying Israel. Iran and its proxies also have a nasty habit of blowing up Jews around the world, from Argentina to Bulgaria to Israel.

Everything here is correct and much has been in the news in recent years. The fact that it’s personal to Cotton makes the case even more compelling. Later on Cotton gets to his main point:

It is the nature of Iran’s regime to kill Americans, export terror, destabilize the Middle East and foment world-wide Islamic revolution. If Iran commits these crimes against the West now, imagine what Iran would do with a nuclear umbrella.

Examine Cotton’s hard look at the nature of Iran and, compare it to President Obama’s. In 2009, Obama explained on CNN why he would reach out to Iran:

I said during the campaign that Iran is a country that has extraordinary people, extraordinary history and traditions, but that its actions over many years now have been unhelpful when it comes to promoting peace and prosperity both in the region and around the world, that their attacks — or their — their financing of terrorist organizations like Hezbollah and Hamas, the bellicose language that they’ve used towards Israel, their development of a nuclear weapon or their pursuit of a nuclear weapon, that all those things create the possibility of destabilizing the region and are not only contrary to our interests, but I think are contrary to the interests of international peace. …

There’s been a lot of mistrust built up over the years, so it’s not going to happen overnight. And it’s important that, even as we engage in this direct diplomacy, we are very clear about certain deep concerns that we have as a country, that Iran understands that we find the funding of terrorist organizations unacceptable, that we’re clear about the fact that a nuclear Iran could set off a nuclear arms race in the region that would be profoundly destabilizing.

So there are going to be a set of objectives that we have in these conversations, but I think that there’s the possibility at least of a relationship of mutual respect and progress. …

Now it’s time for Iran to send some signals that it wants to act differently, as well, and recognize that, even as it has some rights as a member of the international community, with those rights come responsibilities.

Cotton’s response nearly six years later illustrates that Iran is largely “unhelpful when it comes to promoting peace and prosperity both in the region and around the world.” Obama is unwilling to acknowledge that his premise is wrong. He’s more interested in launching a political war against Prime Minister Netanyahu than asking his new BFFs why their general was on Israel’s northern border.

We have a president who is unwilling to look at the nature of the Iranian regime. Fortunately we also have members of Congress who will challenge the President’s refusal to look at the facts.

I found this 2013 profile of Cotton in the National Journal to be pretty good. I especially liked the anecdote about his letter to the editor of The New York Times. The story of the letter is at PowerLine and makes for great reading.

Tom Cotton, looks like one of the good guys got in.

The new Junior Senator from my state. Seems like a good guy, met him once at a rally or some such outdoors event, he stopped and talked to people and tried to answer questions as best he could. He spent about 10 minutes talking to me about hunting area’s. Very nice man. I know that is his job but he seemed genuine.

Also, you have to respect a guy who was a Lawyer and decided he needed to serve and joined the Infantry when he easily could have gotten more rank and less danger in the JAG corps.

Senator Cotton’s a breath of fresh air. A concise and articulate man with clearly stated goals and principles.

The Republicans need a couple dozen more of such leaders, to replace the mushmouthed poll-driven tail of the comet.