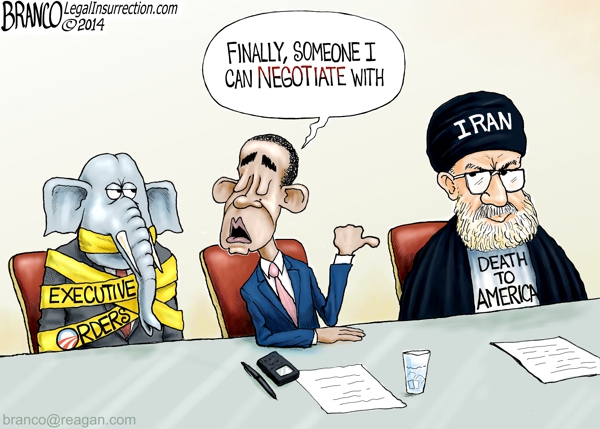 Ever wonder whether Obama’s policy towards Iran represents something coherent, or just naive incompetence? Here’s an excellent article by Michael Doran in Mosaic that fleshes out the details of a theory about Obama’s approach to Iran. It doesn’t take the most extreme stance of all—which would be the “Obama is a secret Iranian sympathizer” theory—but the piece’s premise is credible, and it is well worth taking the time to read in its entirety.

It’s a bit difficult to summarize, but the article makes several points. The first two are that much of Obama’s approach focuses on his deep contempt for Bush and his powerful desire to differentiate himself, as well as Obama’s general penchant for secrecy. But there’s much more:

During the Bush years, an elaborate myth had developed according to which the mullahs in Tehran had themselves reached out in friendship to Washington, offering a “grand bargain”: a deal on everything from regional security to nuclear weapons. The swaggering Bush, however, had slapped away the outstretched Iranian hand, squandering the opportunity of a lifetime…

Obama based his policy of outreach to Tehran on two key assumptions of the grand-bargain myth: that Tehran and Washington were natural allies, and that Washington itself was the primary cause of the enmity between the two. If only the United States were to adopt a less belligerent posture, so the thinking went, Iran would reciprocate. In his very first television interview from the White House, Obama announced his desire to talk to the Iranians, to see “where there are potential avenues for progress.” Echoing his inaugural address, he said, “[I]f countries like Iran are willing to unclench their fist, they will find an extended hand from us.”

Because, of course, the entire thing was a myth.

Did Obama actually believe the myth? Your answer to that depends on how you answer that old “knave vs. fool” question; but I can practically guarantee that many of Obama’s liberal advisors and aides believed it and believe it still, and I contend that they are fools—otherwise known as “useful idiots.”

In 2010, [Obama] signed into law the Comprehensive Iran Sanctions, Accountability, and Divestment Act (CISADA), which eventually would prove more painful to Iran than any previous measure of its kind.

In later years, whenever Obama would stand accused of being soft on Iran, he would invariably point to CISADA as evidence to the contrary. “[O]ver the course of several years,” he stated in March 2014, “we were able to enforce an unprecedented sanctions regime that so crippled the Iranian economy that they were willing to come to the table.” The “table” in question was the negotiation resulting in the November 2013 agreement, known as the Joint Plan of Action (JPOA), which we shall come to in due course. But masked in the president’s boast was the fact that he had actually opposed CISADA, which was rammed down his throat by a Senate vote of 99 to zero…

Obama’s heart was not in it, to say the least: “For Obama, to force a confrontation with Khamenei would destroy any chance of reaching an accommodation on the nuclear front and put paid to his grand vision of a new Middle East order.”

That grand vision fits in well not only with Obama’s idea of the reasonableness of the mullahs (and let’s not forget the influence of Valerie Jarrett, although the article does not mention her), but it fits in even better with Obama’s own towering grandiosity. Obama believes that he is the one who can do it, because he’s smarter, more reasonable, craftier, more perceptive, more persuasive, more whatever-is-needed than all his predecessors.

As for Syria, Obama’s policy (which looked to some like mere confusion) was dictated by his fear of antagonizing Iran and jeopardizing the wonderful transformative agreement that he sees as being just on the horizon. Doran also believes that shortly before the 2012 election, Obama assured Teheran (as he did Russia) that in his second term he’d have a lot more freedom and “flexibility.” The course of subsequent negotiations makes for depressing reading, although we pretty much already know the gist of it, which can be summarized as, “Obama concedes.”

Obama’s Middle Eastern policy has been so Iran-centric that it’s hard not to notice the pattern. But Doran’s article offers a detailed history and a coherent way of looking at the big picture.

That it will make your blood run cold is no surprise; your blood has probably already been running cold for quite some time.

Let me speculate, the great O is going to open with an abject and over emotional apology for harboring the Shah of Iran.

I expect to hear any day now that Obama will issue an executive order making Iran our 58th state.

He’d be more likely to make the US a province of Iran.

I reject this. I haven’t read a mainstream theory yet that satisfies me, as they all are based on an assumption of Obama as a good-faith if misguided and naive negotiator.

I believe Obama sees Iran as his proxy for the destruction of Israel. I’ve believed this for several years. I think his gross nonfeasance during the Green revolution of 2010 supports this theory. He needs the mullahs, and needs a nuclearized Iran, to achieve the longstanding Leftist dream of removing Israel from the map. This is main reason why the Rashid Khalidi tape will never be disclosed.

I have long thought Obama considers Israel to be the problem in the Middle East, that if Israel were gone, peace would reign.

The various theories paint Obama somewhere between fatally naive and Iranian mole agent. I thank the stars every day for Obama’s wide array of ineptitudes.

When are enough people going to get that this joke of a man is actually a traitor?

I don’t care why this traitor is our enemy, siding with our enemies.

We need to decide how we remove him permanently, now.

There’s a bottom line someplace. And, it’s possible obama is a shi’a, not a sunni. How does this sit with the saudi’s I do not know.

True, the king in Jordan is a sunni. And, America is dug in, in Jordan. Not just a bunker system, but boots on the ground! While if anybody’s interested, they can go to Amazon and see that Bibi’s books are for sale. His latest was published in 2012, and deals with a strategy for a durable peace.

By the way, the elections of 2014 demonstrated that obama has no great touch for politics. The democraps took a bath!

Up ahead the Bibi-sitter is coming to America to speak. An accomplished prime minister. An accomplished politician. Writer. And, a man who speaks perfect English. Yes, obama and his stooges are doing their best to send Bibi off the rails.

While obama appeals to his base of low-information voters.

I’d even bet there are plenty of democrapic politicians who are fit to be tied! I think obama’s done more damage to his own party than jimmy carter.

For this to be completely accurate, Obama should be depicted bent over in front of the mullah, in the posture known in the animal world as “presenting.”

So, Obama threw Iraq under the bus because he favors Iran. I wonder who else is disposable and replaceable. Well, other than We the People and our Posterity (i.e. children), that is. It’s difficult to hit a moving target (i.e. pro-choice or selective principles).

Neo-neocon writes a good article, but he is way off base when he predicts this will make my blood run cold; my blood has been running quite hot for about six years. Every time it starts to cool we get a Fast & Furious, Benghazi, IRS (etc.) to heat it back up.

What I don’t understand is why Obama has not been charged with gross and continuing violations of Article II, Section 1 of the Constitution. The proof of his malfeasance in this regard is voluminous.