The evolution of immigration rights in America

The evolution of immigration rights in America

Bill Whittle gets down to the brass tacks on immigration 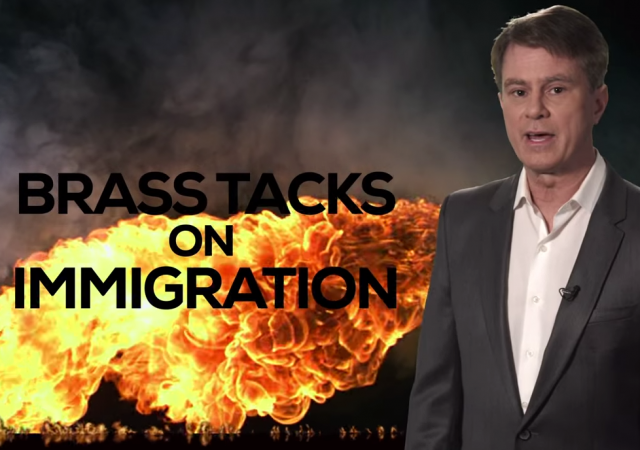 In the new edition of Firewall, Bill Whittle provides a glimpse into how far we’ve come on immigration. Not only is Obama now saying he can grant executive amnesty, a position he claimed was illegal for years, some people in government leadership positions think illegal immigrants have special rights. Very special rights.

Transcript and video via Truth Revolt:

First, if there are no such things as illegal aliens, as the advocates for open borders proclaim – then where does it stop? If seven million people can sneak across the border at night and be granted the same status, and the same benefits as US Citizens – social security, medicare, and the right to vote – then where do we stop? Why only seven million? Why not all seven billion people currently on planet Earth?

If three hundred and twenty million Americans are having money taken from them at gunpoint through taxation in order to GUARANTEE the RIGHT of one transgendered illegal alien to hormone therapy once they cross the border, then there is no line – none. None! – between that and them having to pay through their hard work and taxes the health care of any one of the seven billion people on planet earth who can manage to cross a two thousand mile long line on a map.

Second, if the candidate for the chief law enforcement position in the land says that someone entering the country by breaking the law is not only not going to be arrested and deported, but rather has the same right to take a job from US citizen or a legal immigrant on a work visa and condemning them to unemployment and dependency on the government, then what does that tell you about the person who nominated her to that office?

In some ways, this fight is reminiscent of Obamacare. No matter what the voters say or do, Obama won’t take no for an answer. Julia Edwards of Reuters:

The U.S. Justice Department will seek an emergency stay to block a decision by a federal judge and allow eligible immigrants to apply for benefits granted under President Barack Obama’s recent executive actions, the White House said on Friday.

Immigration advocates have called on the Obama administration to take legal step to reverse the injunction issued in Texas on Monday that barred immigration officials from accepting work permit applications under the orders.

Approximately 4.7 million undocumented immigrants could be granted a reprieve from deportation and work permits under Obama’s immigration orders if they are allowed to proceed.

Thanks Rags! Should be required viewing !
From you tube —-From the comments:
G.I. Joe
17 hours ago

Why do they actually have to cross the border to get all the freebies? Since it’s all fiction, anybody anywhere can be “deemed” to be a citizen. In ObamaLand, all it requires is a stroke of the executive pen.

Not even a stroke of a pen, just a verbal statement issued by a bureaucRAT !

There is a profound…and quite intentional…confusion of what “rights” mean and what ones we have.

As between an individual and the remainder of society, the Collective view “rights” as anything they can claim. Anything.

But as between citizens and their government, rights were set out to restrict the government from encroaching on our conduct as free people. Not that they were given us by government, but that they have been elaborated in the documents establishing government’s legitimacy.

So it is, to us here, a dirty joke for a Federal bureaucrat to baldly declare that someone here in violation of our laws has a “right” to hormone therapy. They simply do not.

I, as a citizen, DO have some rights as pertains to my government, and one of those is that it will…stem to stern…honor both the spirit and letter of the laws. I have a right to be able to depend on my government to maintain the integrity of my nation. To demand it, in fact.

So, how in God’s Grace do we survive the remaining months of Obama’s presidential term? I don’t see any way for that to happen and still have a country left by January 20, 2017. And, yet, there has to be a solution! Ideas, anyone?

We might have been better off if we’d lost the war with Mexico back in the 1840’s, since apparently we’re losing it now to Mexicans and to any Muslim that wishes to reside here, really, rather any of those who wish to enjoy the largess of our once fair nation, regardless of where they live!

No offense, but there is no such thing as “immigration rights.” Immigration is at the discretion of the sovereign state, no immigrant can have a “right” to it.

Which means, Andrew, that the Obama administration is simply giving up the sovereignty of the United States.

The argument would be: No, we’re not giving up anything. I AM the President, and I am granting these rights in the name of the American people, consistent with the values that make us Americans…blah, blah, bla, blah, blaw.

And THERE lies the whole, terrible crisis we are at. We are a nation of laws, but we are currently suffering under a dictator. “Who IS the sovereign? The People or Barrackah Hussain Obama?”

You said it. Therein lies the problem.
Obama won’t accept that it’s NOT his decision to make because when he looks at the mirror, he does not see a President; he sees a Monarch.

Can anyone recommend a good book on the history of U.S. immigration policy?

Obama in his Alice in Wonderland role as a constitutional lawyer, strokes his chin and says he believes America needs “positive liberties”, to him meaning things the country must do FOR the citizen (housing, food, health care, etc) as opposed to the current “negative liberties”, what our government can’t do TO us (limit free speech, unwarranted searches, etc). So Obama ignores the constitution, and packs the courts with judges that will support him, and AG’s that will act contrary to law.

Applying those “rights” to the whole world is a logical extension of robbing from working Peter to pay slacker Paul. And the mythical magic of diversity means we must keep importing peoples that don’t believe in our successful culture.

another issue on Lynch … letting HSBC off easy for laundering billions for Mexican cartels. This after our last AG lied to Congress about the 1000’s of guns assault weapons his agency (allegedly) provided for those cartels.

Considering how cartels kill off whole police departments in Mexico, we should not doubt they have strong influence here as well. Especially given this administration’s disdain for our police, and their “solidarity” with druggie thugs like their martyrs Trayvon and Brown.

DRAT (Displace, Replace, Abort, and Tax) policy is commonly accepted among Americans in exchange for liberal doses of opiates (e.g. dissociation of risk, promises of instant or immediate gratification). It is a policy and religion (i.e. moral philosophy) of the Democrat Party, and, unfortunately, not a few Republicans.

It’s telling that neither the appointed “minority” leaders nor the aliens themselves are willing to address, let alone resolve, the causes that motivate millions of legal and illegal aliens to leave their home nations and that presumably still oppress the people who remain behind.

So, they don’t care about children in America (or Progeny generally) or abroad. The goal of diversity seems to be nothing more than neutralizing Americans and reducing democratic leverage of the majority Protestant population.