Though he is gone, his work will inspire kids to “reach for the stars.” 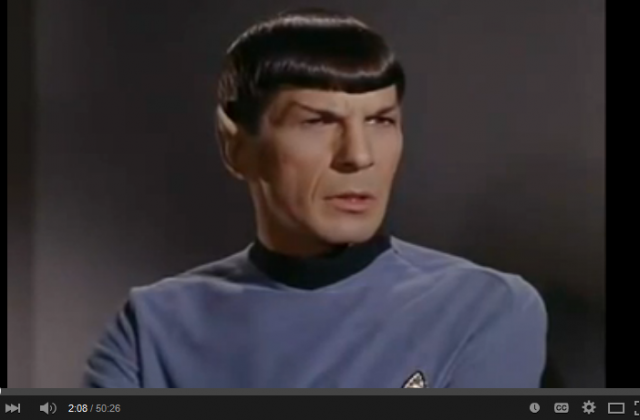 America has lost one of its most iconic actors. Leonard Nimoy is dead at age 83.

Leonard Nimoy, best known for playing the role of Spock in the “Star Trek” movies and television series has died at age 83, his rep confirmed to FOX411.

Nimoy was taken to the hospital earlier this week and treated for lung disease. His son told the Associated Press he died in Los Angeles.

The actor wrote on Twitter last month that he suffers from chronic obstructive pulmonary disease, despite quitting smoking 30 years ago. On Sunday, he tweeted: “A life is like a garden. Perfect moments can be had, but not preserved, except in memory. “

The influence of Star Trek can not be overstated. Many of us who went into careers involving science, engineering and technology spent many happy hours watching this wonderful television series. I remember playing Star Trek in the school yard; a boy I had a crush on took on the role of Kirk, so given my grades, attitude, and short, dark hair I pretended I was the Vulcan master of logic.

My son and I spent most of the past fall and winter watching the Star Trek sequel series. While he enjoyed Worf’s Klingon character more, he cheered whenever Spock made a guest appearance. Clearly, Nimoy will continue to inspire even more generations of young scientists, engineers, and game designers.

As a pundit, I must admit Star Trek inspired some of my best work (e.g., Tin Plated Over Bearing Swaggering Dictator with Delusions of Godhood). I also created this gem for a Tea Party event. 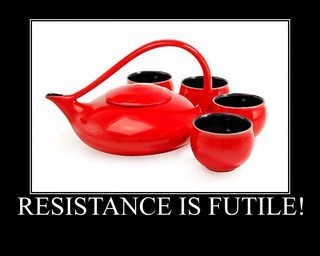 America is deeply saddened by the loss, and news of Nimoy’s passing spread quickly through social media. Unfortunately, the state of communications today is such that a story about his “hoax death” was being spread, too. This is one case in which I wouldn’t have minded being hoaxed.

I really admired Nimoy’s sense of perspective when it came to his signature role, and his sense of humor. Here is one of my favorite commercials, featuring a battle of speed and wits between “Old Spock” Nimoy and “New Spock” Zachary Quinto.

Truly, we have lost a very special and inspirational American today. Prayers for his soul and the comfort of his family.

I would like to end with a video of one of my very favorite episodes of “Star Trek”: Season 2, Episode 10 – “Mirror, Mirror”.

Though he has passed away, his work will continue to inspire Americans to “reach for the stars”. It is about the best legacy an actor could leave.

Well, he DID live long and prospered.

Sadly, he also self-abused and squandered. But all that is behind him now.

Self-abused? As in solitary pleasure? And what did he squander?

I’m beginning to worry about you, rags. There seem to be multiple stations coming in on your frequency, if you catch my drift. Of course, I could just be dense as a rock so there’s that possibility.

Nimoy died of COPD, the result of a lifetime of smoking, hence he abused his body and squandered some amount of life.

83 is still a pretty good innings though.

Mr. Nimoy was an alcoholic. I put that in the “self-abuse” column. You may hold a different opinion. I’m cooo…

According to Hollywood sources, he made and blew a LOT of money. I put that in the “squandered” column. See above WRT opinions.

The heart usually tires of the chase after a life with COPD and gives up. The medications used to treat COPD work by dilating the bronchii, allowing more air into and out of the lungs. Unfortunately, they increase the heart rate and blood pressure, too.
The hearts of the mouse and the elephant beat an equal number of beats during each species respective lifetimes.

I’m sorry to hear this news. Nimoy was definitely a sci-fi icon. I also find his inspiration for the creation of the Vulcan salute in Jewish ritual to be interesting. As a fan, I mourn his death, but also celebrate his gifts and his work. I’m glad that he had a substantial and excellent final bow appearance in the supremely enjoyable “Star Trek” re-boot of a few years ago (his cameo in the sequel was brief and unnecessary, I thought). He lived long and prospered, by any reasonable measure.

May his ride on the beam to that great starship in heaven be gentle and comforting, and may God rest him in peace.

Nimoy was the coolest dude ever on TV.

Eventually, everybody has to wear the “red uniform”

Like many liberal Jews, he was strong supporter of Israel, and like Netanyahu favored a two-state solution: separate governments for Israel and the Palestinians.

It takes a special kind of stupid to troll an obituary thread.

Well, he IS a special, special snowflake.

He ain’t so special if he melted. Just saying.

Why did you take that as troll-like, Amy? It was meant to be a tribute to Leonard Nimoy, a Liberal Jew who I knew casually. Our paths would cross occasionally at Temple Israel in Los Angeles, at special events.

Like me, he was a strong supporter of Israel, and put his money where his mouth was, donating time and money to support various causes.

Like me, he believed the Israelis and Palestinians needed to live apart from each other, in partitioned countries.

What do you find troll-like in that?

No one believes anything written by Junior Jackass.

A troll remains a troll.

I once read in an interview with either Gene Roddenberry or Leonard Nimoy that when Star Trek was in the design stage, the network wanted the Spock character to smoke some kind of “space cigarette.” Cigarette advertising was still legal then, and the idea was that there could be some possible product tie-in. Roddenberry and Nimoy quickly shot down that idea, as it would encourage teenagers to smoke.

Yesterday I began pon farr and now this, the death of Spock.

And how many years is your cycle if you DON’T take that little blue pon farr pill?

“Every seven years, Vulcan males and females become aroused. They undergo a blood fever, become violent, and finally die unless they mate with someone with whom they are empathically bonded or engage in the ritual battle known as kal-if-fee.

The idea is based on the mating ritual of animals on earth, notably the female ferret that also dies if it has not mated by the end of the season.[1] In the rebooted Star Trek, Vulcans also mate outside of pon farr, and with species other than Vulcan even if not mentally bonded with them. A common misconception associated with the series (and Spock in particular) is that Vulcans only have sex once every seven years. However, pon farr is not coincident with the sex lives of Vulcans, and they are able to have intercourse without the affliction, and thus more than once every seven years.”

So Vulcans would be the ultimate “high pressure” dating prospect. “Empathize with me, baaaabeee, or I’m a dead man.”

Talk about your poor evolutionary adaptations…!!!

Since Spock’s mom was human, was he only half-farrsed…???

i wonder if he was wearing a red shirt on his deathbed?

Leonard Nimoy loved speaking Yiddush so much he paid a Los Angeles shrink weekly, just to have the opportunity to speak with someone in Yiddush https://www.youtube.com/embed/9QAYvI5CC5s … … …

Not a huge Star Trek fan, but my kids are into the original right now. My dd, especially, likes Spock.

Nimoy was kind of creepy in the Invasion of the Body Snatchers remake, though ~

When I was a kid, Star Trek came on at 9, and our bedtime was 9:30. Mom would tell us to go to bed, and we’d say, “But Mom, it’s Star Trek!” It was really the only time we gave her trouble at bedtime, and she relented.

My thanks to Mr. Nimoy for making some of my time in front of the Tube well-spent.

Did someone say “pathetic narcissist?”…

Not bad for a pathetic try-hard who, until recently, didn’t know the difference between Star Wars and Star Trek.

“Live long, and may the Force be with you!”

As someone wisely pointed out: It could have been worse –

.@WhiteHouse Who had "Obama will appear in the Nimoy tribute tweet" in your office betting pool, besides every single person on Twitter?— Shane Styles (@shaner5000) February 27, 2015

Thank you Leslie, for the wonderful article and the links.

We saw him on stage in Los Angeles as Sherlock Holmes in late 1975, with Alan Seus of Laugh-In fame as Moriarty. They were both absolutely brilliant in these roles! My mental image of Holmes has been Nimoy’a portrayal ever since – Sorry about that, Basil.

Any fans of the show Fringe will also remember Nimoy as William Bell, brilliant scientist & futurist, and Walter’s former partner. His wasn’t a main character, but he added a good bit of credibility to the show, and helped make it the best sci-fi TV show ever, IMO.