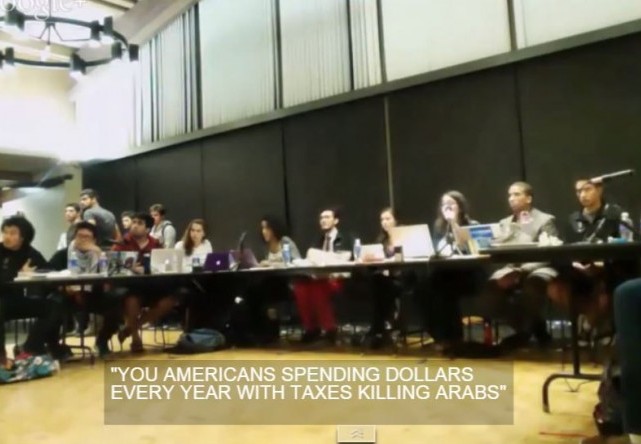 When the University of California system-wide student government passed a resolution not only divesting from Israel, but also the United States, it was met with widespread mockery and ridicule.

The Stanford University Undergraduate Student Senate avoided that fate by failing to pass an Anti-Israel Resolution heavily promoted, including by dozens of Stanford pro-BDS professors to influence the outcome. As now seems to be a common tactic, the #BlackLivesMatters leadership was recruited to help with the effort.

There was a Petition and some very good dissections of the Resolution by opposition students. One analysis indicated it wasn’t even clear that Stanford invested in the companies from which divestment was sought, The Hidden Agenda Behind SOOP’s False Divestment Claims.

The vote was close — the boycotters needed a 2/3 majority, but fell just short.

But a fail is a fail, and this at least gives pro-Israel, pro-peace students some time to regroup and reconsider how to fight this scourge. Multiple student Senate members who voted for divestment claimed in speeches that they did it for love of Israel, as if it was their job to know better what is good for Israelis than Israelis.

When the vote was announced, there was a chorus of cheers, followed by someone (not sure if faculty, administrator or student) asking people to just get along, followed by shouts from an angry member of the crowd:

As is usual when BDS loses a vote, they act like it was a victory. There is a historical irony in that.

Incredible campaigning by the heroic @StanfordSJP! Each year the movement gets stronger. We are winning. #StanfordDivest

#StanfordDivest Just incredibly proud of the students. They went on even when they knew they probably would lose. They did. By 1.

Senators are yielding their speaking time to Palestinian students. This is beautiful. This is solidarity. #StanfordDivest

The Chinese, Japanese, Indians, and Europeans have a greater stake in Arab soils than either Americans or Israelis. I wonder why they are bullying only the latter.

That said, make life, not abortion.

Just stunning how far down the rabbit hole this discussion on campus has fallen. Very worrying indeed.

Read the palis founding documents. The main point is the eradication of Jews in their own lands.

Please consider signing the petition against Israel divestment at Stanford. In case divestment returns next year, we need more signatures!