An insightful analysis on the Hispanic community. 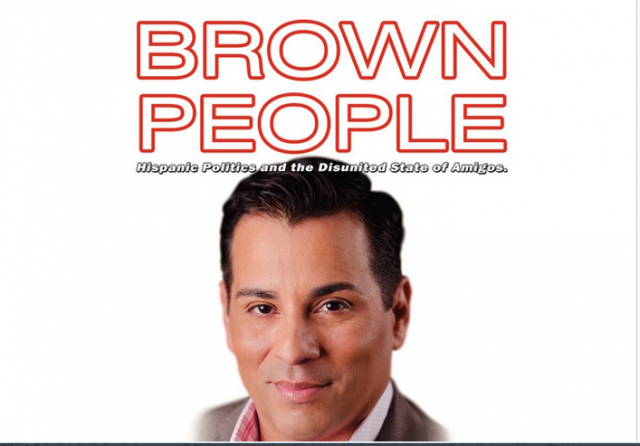 BROWN PEOPLE, Hispanic Politics and the Disunited State of Amigos by Javier Manjarres is an entertaining and eye-opening look at America’s Hispanic community, and the author’s personal experiences as a citizen activist and conservative pundit. This spirited book is essential reading for those who want an enhanced understanding of the complexities of this expanding group of voters.

Manjarres, the son of Colombian immigrants, is the Managing Editor of The Shark Tank, which offers “biting commentary on anyone and anything that comprises Florida Politics.” He was voted 2011 CPAC Blogger of the Year and was acknowledged by FreedomWorks for his efforts during the 2010 election cycle. He was credited as being the “tip of the spear” of Senator Marco Rubio’s campaign for U.S. Senate in 2010, and helped lead Rubio to victory over sitting Governor Charlie Crist.

Here is a recent appearance by Manjarres on Newsmax TV in which he discusses the evolving relationship with Cuba:

Humor is integral to effectively communicating the conservative message, and “Brown People” is full of hilarious takes on “identity politics” and current culture. The title of the first chapter, 50 Shades of Brown, is a great example of the politically incorrect and irreverent approach some analysts use when explaining the challenges of reaching out to Hispanics. In this segment, Manjarres covers the diversity of background among Hispanic people, and notes the distorted terminology created to break Americans into smaller identity groups, such as Afro-Latino and White Hispanics (e.g, George Zimmerman):

“But once the media learned that Zimmerman was not completely “white” but was part Hispanic as well, they quickly relabeled him as a “White-Hispanic.” This was the first time I had heard the term “White-Hispanic” used by the media, and it was disingenuous to say the least.

Because politics is “the art of the possible”, Manjarres gives some sensible pointers to conservatives engaging in Hispanic community outreach. Chief among his insights is that Hispanic voters weigh God, family, and their local community very heavily when in the voting booth; and while such attitudes should, theoretically, make conservative candidates more appealing, Manjarres asserts that this is not necessarily the case.

One big reason: the language barrier.

All of my relatives first registered as Democrats when they arrived here, and it wasn’t their fault they didn’t know better at the time. Coming from a country like Colombia, which has come a long way politically and economically but is still as corrupt as other Latin American countries, my relatives became Democrats simply because the name of the political party sounded similar to the word “democracy”.

The language barrier is one of several reasons why Manjarres doubts that Republicans will soon win a plurality of Hispanic voters, and conservatives looking at the 2016 field of GOP hopefuls might do well to remember this admonition when any potential candidate asserts he/she will appeal to this demographic. In his chapter, Puerto Rico — The Next United State, the author describes a better strategy for conservatives than trying to out-promise the Democrats.

While Bush did better than McCain and Romney, the fact that he broke the 40% mark could point to the possibility that Republicans may someday be able to win a plurality of the Hispanic Vote.

To be absolutely honest, I don’t think that will happen in the near future — not only do I think it’s a bit of wishful thinking, I think Republicans would be better served for the time being on mitigating the damage done by the Democrats who pander and bribe Hispanics in the immediate run up to the elections.

The Hispanic Media Bias: In this section on the media, Manjarres details the reasons for Univision’s dominance, and covers the time when President Obama was grilled by that channel on why he hadn’t done more about “white privilege.” Indirectly, he underscores a similar point that I and others have made about the need for conservatives to invest in new media options in areas that have essentially existed under a progressive monopoly.

The Tea Party Fiesta: Some of the Tea Party’s most ardent supporters have been Hispanics, because as Manjarres notes, they are here because they have fled authoritarian regimes implementing big government policies.

In other words, you can say that many Hispanics are seasoned Tea Party-like protestors, or perhaps many are Tea Party protestors who don’t quite know it yet. It’s in their sangre – that’s blood in Espanol for those of you taking notes.

Finally, I would like to give Majarres a personal shout-out for bringing up Egyptians, as the race of its ancient peoples is a continuing source of heated debate. Were they “brown people”? Most likely!

Majarres’s book is a salsa of salient points and amusing personal anecdotes that I highly recommend to anyone interested in Hispanic outreach.

Harry Reid refused regular order, refused the funding Republicans had on his desk, even refused to put out the legally required budget. Reid famously said he would not take those funding bills up … “I will not do this piecemeal”, because we’ll get to the end and we won’t have the Obamacare piece.

Only complicit media and submissive Republicans turn that truth into the lie “evil Republican’s shut it down” .. so it’s now accepted as fact. Javier passively agreed in the video. “Republicans overplay their hand, and they shut it down”. No, Republicans have the hand, but they don’t seem to want to win on this.

Republicans must voice all Obama’s dereliction of duty on guarding our border. Then set up a quick Ellis Island system for real workers, with perhaps limits on the entitlements. No one should be enticed here with free stuff, for the purpose of voting control away from the current population.

A strong border policy might win R’s 5-10% more white vote, which accomplishes more than hoping for 40% of the brown vote. A large number of Hispanics also want a controlled border as I see it, to reduce the cartel influence that dominates Mexico.

Fixed. Thanks for the catch, as my Spanish is confined to taco and cerveza.

Both Columbia and Colombia are named after Christopher Columbus, whose name was Christofo Colombo in his native Italian.
#TodayInUselessTrivia 😉

I am a big fan of useless trivia. 😀

You are welcome.
And thank you back for a prompt and humble response.

enough … brown people are not more complex than white, or yellow or red people … the idea that one group has to be dealt with in a “special” way is pure racist nonsense … you shouldn’t promote that at LI …