Imagine a social-justice version of the Girl Scouts 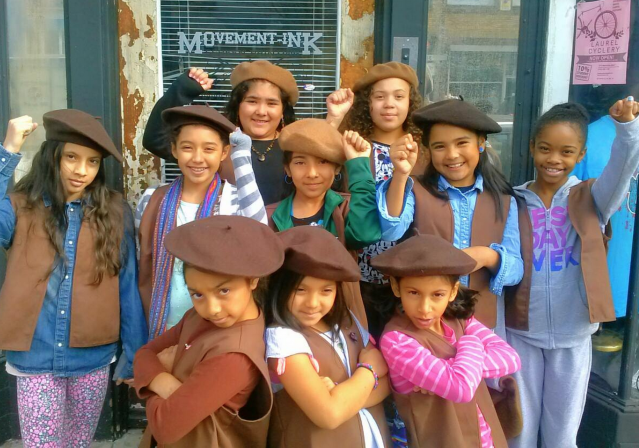 In Oakland, California, one alternative scout troop is far more socially active than their counterparts across the globe—and they’re not affiliated with the Girl Scouts.

They call themselves, “Radical Brownies.”

Their mission? “The Radical Brownies empower young girls of color so that they step into their collective power, brilliance and leadership in order to make the world a more radical place.”

There are no badges for stitching, taking care of pets or being a good neighbor. Radical Brownies “badges earned are custom-made,” and “reflect our social justice and culturally-inclusive values.” Badges include Radical Beauty Badge, Food Justice Badge, Radical Self-Love Badge.

This social-justice version of the girl scouts is a relatively new endeavor by group organizers. In the video below, co-founders Marilyn Hollinquest & Anayvette Martinezco discuss why they decided to create the group. In short, their goal is to show young girls what the world would look like if it were free of “isms”:

Those berets they’re wearing aren’t coincidental, nor are they a Parisian inspired fashion accessory. They’re an intentional nod to the Brown Berets and Black Panthers. According to the group’s organizers, “the Radical Brownies are inspired by movements grown by the community; movements that fight for justice for their communities and seek alternative ways to look after and represent themselves. The berets pay homage to the spirits of the Brown Beret and Black Panther movements of the past.”

Starting small, the Radical Brownies have big dreams. After taking a year to fine tune the curriculum, they hope to, “see the program grow and expand to other cities.”

I guess we can’t complain, per se – if there was a conservative counterpart I’d cheer, so I’d be a hypocrite to then not want a leftist version.

My problem is that I honestly think the SJW’s are a crap movement based on grievence, envy, anger, and divisiveness.

This is sad. My daughter is black, but if she were white – would she be allowed in?

Not if she’s straight.

“As queer women of color and avid trans allies we believe in creating trans and gender non-conforming inclusive spaces. We embrace the spectrum of gender diversity throughout our lessons and activities with group members. As co-founders we each have 15 years of youth development and programming backgrounds with LGBTQ and youth of color, and are implementing best practices in building a strong structure for our group.”

I don’t think these Radical young girls of color will be getting any awards for diversity and inclusiveness.

You just know that some of these girls are going to marry a ginger guy with blue eyes who’s a service vet and Rush listener, and they’ll take their six kids to Sunday School in Texas…and then go to the rifle range!!!

I suspect they’ll be impregnated by gang bangers before high school graduation.

You are an optimist. Some of them by Jr. High graduation.

“Diversity” = “Everyone except whitey.”

Except for Marxism and Communism.

I forget. Who was it who said something on the order of “better to tie a mill-stone around one’s neck and throw oneself into the sea than lead a little one into sin”?

What sin? These little ones are being taught to see life as hatred and misery.

Ah, a radical self-love badge. I’d like to see that one sewn into Obama’s suit right above the little American flag lapel.

Didn’t we see these girls a little while back, dressed in princess costumes and screaming obscenities?

Earlier, actually. They were singing the obama song.

Can you say lawsuit? I cannot even begin to imagine the Girl Scouts of America (TM) allowing them to hijack the name Brownies or the obvious similarities to their organization….

My now grown daughters were in Girl Scouts and my wife ran both their troops. My son was in Boy Scouts and I was at every meeting, although I had no official position. I can say that the two organizations are very different, and that the Girl Scouts today are essentially socialist, collectivist, statist, and that these Radical Brownies are actually not that far from what the National organization wants. There will be no lawsuit.

Racist Socialists do NOT allow any “white” girls. Socialist always like the “brown shirts” 4 pre-takeover, black 4 post take over.

Colorism is an “ism”.

What would be really radically is to reconcile individual dignity and intrinsic value so that it does not engender class conflicts.

Actually chromatism is an “ism”. It reflects an aberrant perception of colors. It could be caused by a physical or psychological (i.e. syndrome) condition that misses the individual for their skin color or color blob.

Oh, and that “Radical Self-Love Badge” must be a really tough one to earn. Or do they just have to affirm, “I’m a girl of color and therefore I’m better than white people”?

WOW … not getting measles vaccinations has harmed some kids, but turning them into radicals and haters in the mold of the black panthers is getting close to child abuse. How far do they go in training these girls to be accepting of “alternative” sexual positions?

Ahh the Nazi youth of tomorrow, aren’t the cute.

The two in the back are up for the antisemitism badge. The three in the front row hold their school record for selling the most cookies laced with dope.

Apparently someone who read this story was working toward the Downtwinkle Troll badge.

A Girl Scout salute (and Brownie) is three fingers, representing the Girl Scout Promise:
To serve God and my country,
To help people at all times,
And to live by the Girl Scout Law.
These children have a closed fist salute, I guess that represents nothing. Sad in a way.