The Republican primary race is neck-and-neck; Jeb Bush is still on top, but other top picks for the nomination are closing in.

A new Bloomberg Politics poll out of New Hampshire shows that, although Jeb Bush is leading (for now,) those numbers don’t necessarily translate to confidence and overall popularity with primary voters.

Even if Bush should overcome those doubts to prevail in what is shaping up as one of the most wide-open Republican primaries in the state’s recent history, the poll suggests that he is deeply unpopular with likely general-election voters. It’s a worrisome sign for his campaign in a battleground state that both parties have targeted during the past several presidential elections.

Of course, Hillary is on top in her race:

The poll also shows former Secretary of State Hillary Clinton dominating her potential Democratic rivals. Clinton, who won the state’s presidential primary in 2008, is the first choice of 56 percent of Democratic primary voters. Senator Elizabeth Warren of Massachusetts, who has said she isn’t running, is second at 15 percent, while Vice President Joe Biden and Senator Bernie Sanders of Vermont both have 8 percent.

This poll is the first run since Mitt Romney dropped out of the race for good. Even with Bush on top, some analysts are wondering why he hasn’t pulled further ahead of the other candidates based on his superior name recognition. Should Bush be worried? Fox News contributor and former Reagan campaign manager Ed Rollins says “no,” and explains why, at this point, it’s still a “wait and see” game for top tier candidates:

This makes sense. After Romney pulled his hat from the ring, many of his supporters were left with the decision to either support Bush, who was in many ways Romney’s biggest challenge, or keep an eye on other emerging challengers like Rand Paul or Scott Walker.

The fact that the Romney loyal didn’t automatically jump ship to the next logical “establishment” choice isn’t a gamechanger, but it’s also not insignificant, especially if you’re Paul, Walker, or Chris Christie, who is still holding on by a thread to double digit support.

There’s a reason why these candidates forced the primary season into an early start, and you’re looking at it. Since the beginning of Obama’s spiraling second term, Romney’s credibility as The Man Who Deserved the White House© has skyrocketed, emboldening his fans and causing even the conservative wing of the Republican party to take a second look.

But Romney’s candidacy was always appended with a question mark; top candidates like Bush and Paul knew this, as did emerging faces like Walker and Christie. Now, Romney’s proverbial orphans are looking for a home, and judging by this poll, your guess is as good as mine as to where they’ll eventually end up.

A handy visual aid, from Bloomberg: 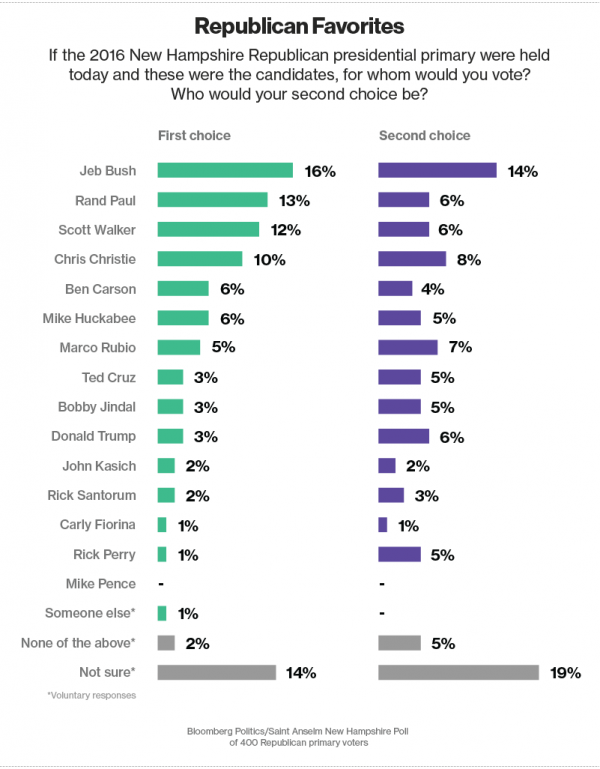 ?!! Please do a profile of the so-called ‘Republicans’ of who think Jeb Bush is a viable candidate given everything we’ve learned in the last eight years of how GOP-Establishment-consultant-driven, non-media savvy candidates never survive the brutal Hunger Games phase of the General Election.

“Romney’s credibility as The Man Who Deserved the White House© has skyrocketed, emboldening his fans and causing even the conservative wing of the Republican party to take a second look.”

There is no point in discussing “the state of the race” because THERE IS NO RACE YET. No one has entered formally. No one. So no one is ahead, no one is moving up, no one is losing ground.

At least debating how many angels could dance on the head of a pin is an intellectual exercise.

Remember 2012? In that cycle, we essentially had the “Flavor of the Month,” with Perry, Cain, and Gingrich all showing strength at one point or another. Perry and Cain were in AND out before Iowa.

It’s an exercise in futility.

BS! It looks like the GOP is going to shove Bush down our throats and make him the nominee.

Relax. This poll means absolutely nothing. It is silly to even write about.

I think Ms. Miller works for the Jeb Bush campaign or something.

Keeps making broad, untrue statements about ‘conservatives’ and refuses to name names so a reader might check. Just things she knows magically, I guess.