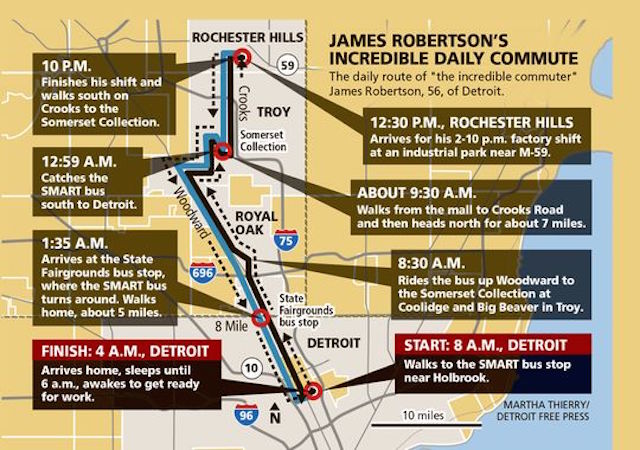 Every once in a while, fortune favors those who work hard enough to earn it. This is one of those times.

Last week, the Detroit Free Press ran a story about a man named James Robertson. For the past ten years, 56 year-old James has dealt with a 21 mile commute back and forth between Detroit, Michigan and a factory in Rochester Hills.

21 miles doesn’t seem like such a big deal—unless, of course, you don’t have a car or available public transportation. When James’ car died a decade ago, he kept going to work; only now, he had to walk.

James’ situation began to catch the attention of the community after the Free Press went to print; since then, his story has taken on a life of its own. A complete stranger started a GoFundMe account with the intent of raising a couple thousand dollars towards a “beater” car to help lessen James’ burden.

As of about 6 am on February 8, this is the balance of that account: 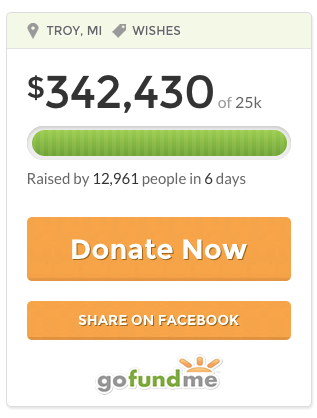 Supporters used some of the proceeds from the account to surprise James with a new car (and it’s definitely not a beater—it’s a new Ford Taurus!)

From My Fox Detroit:

Finally a new ride for the man whose 1988 Honda sedan broke down 10 years ago. Since then he’s been using buses and his boots to get to his job in Rochester Hills from his house in Detroit.

It has been a long time since he’s driven a car. The last time he drove, he had a set of keys. Now, he just has a fob.

Once he heard the sound of the engine, he was overcome with emotion and gratitude.

“He almost started to cry, and I said ‘James, you can’t do that, you are going to make me cry too,'” said David Fischer, Jr. of Suburban Ford.

“It was incredible, I almost started crying,” Leedy said. “My goal was just to get him in a ‘beater’ something to just get him to work and back.

Instead the fund has raised over $300,000 and the dealership delivered the Ford Taurus – which was exactly what he wanted.

The balance of the account will, of course, go to James.

We at Legal Insurrection have had to cover some brutal stories over the past couple weeks. The Obama Administration is spiraling; hostages are dying; half of Africa is ready to go up in flames.

Let James’ story serve as your palette cleanser and your reminder this week that every so often, extraordinary things are born out of the simple desire to lessen the burdens of another human being.

A hard working man. Deserves it, and the thanks to the generous and good-hearted Americans who put up their money to someone who was in need. God Bless

You are right.
I think it was his genuinely humble display of old-fashioned American work ethic that triggered the national respect for and desire to help this man.

I feel it’s important to note that Mr. Robertson would like to call attention to the fact that the Detroit bus system is mismanaged and totally inefficient for its users. Once again, a government entity fails.

Still going up. Guess he won’t have to worry about making the insurance and tax payments for a couple years.

Where’s the Justice Brothers? We can’t have reparations being paid without them getting their cut.

I saw the Fox report on this story. The man is definitely one of the most humble. I think it is more important that he stated that he attributes his attitude to his parents and the way that his family was raised.

The man has an excellent work ethic and the amount he has been earning is well below the poverty line.

Well done to the man who gave him a lift and the student who raised the funds.

Proof positive that a safety net already exists…in our hearts.