Manterruptions are plaguing the workplace

Manterruptions are plaguing the workplace 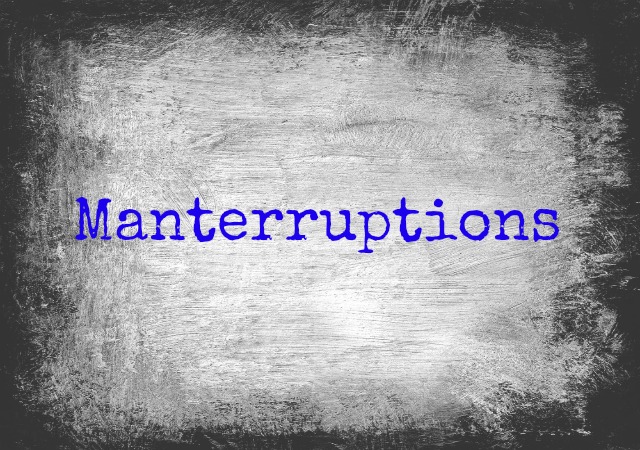 If not for TIME magazine, I’d have gone along my merry way, ignorant to the fact that manterruptions exist. No, it’s not a fun, colloquial expression used by youngsters these days. The author is quite serious about the trials and tribulations forged by manterruptions.

Cited Example: When Kanye West interrupted Taylor Swift as she was accepting her award for best female music video in 2009 saying, “Imma let you finish, but Beyonce had one of the best videos of all time.” In all fairness though, Kayne tends to live in his own Kayne planet where the sun and the moon rise and fall at his bidding; so I’m not sure that’s the best example as it’s an outlier, but since that’s the one TIME provided, we’ll roll with it.

According to TIME, manterruptions are a workplace epidemic, and another tool of the patriarchy to keep women down.

“When a woman speaks in a professional setting, she walks a tightrope. Either she’s barely heard or she’s judged as too aggressive. When a man says virtually the same thing, heads nod in appreciation for his fine idea.”

And the result? Women hold back. That, or we relinquish credit altogether. Our ideas get co-opted (bro-opted), re-appropriated (bro-propriated?) — or they simply fizzle out. We shut down, become less creative, less engaged. We revert into ourselves, wondering if it’s actually our fault. Enter spiral of self-doubt.

The first is sexism directed towards males. Men are never afforded special privilege or understanding. Rather, they should dwell in a state of perpetual contriteness to atone for the unforgivable sin of being a man.

Second is a severe lack of self-esteem. These women, for whatever reason, seek validation from every man that crosses their path. They lose their bloody minds when the men they work with focus more on work than said woman’s feelings. Rejected, spurned, and ovaried, these women vomit their hurt feelings all over the rest of the world in one massive glob of self-projection.

But never fear, if you’re the victim of manterruptions, TIME provides a guide to prevent further manterruptions; and I’m sure you’ll be shocked to know that most of the seven tips are, wait for it… sexist.

1) “Know That We’re All a Little Bit Sexist — and Correct for It” — unless of course you’re a woman, then know that you deserve to be treated differently because you have ovaries.

2) Establish a No-Kanye Rule (Or Any Interruption, for That Matter) — can’t disagree here. No one likes an interrupter, so don’t be that person.

3) Practice Bystander Intervention — because what every office needs is more people butting into other people’s business.

4) Create a Buddy System With a Friend — because the professional workplace is no different than kindergarten. Which actually explains a lot.

5) Support Your (Female) Colleagues — OVARIES. SUPPORT ALL THE OVARIES. BECAUSE OVARIES.

6) Women: Practice Assertive Body Language … And Own Your Voice — Aggressive body language does wonders for teamwork.

7) Support Companies With Women in Power — Sex of the CEO makes them superior organizations, clearly.

The only way to absolve the sin of manterruptions is with sexism directed towards men, it would seem. That’s modern “feminism” for you.

Respect individual dignity seems to be a useful, albeit antiquated concept. Along with intrinsic value, it is disfavored by the social industrial complex, which has become a sponsor of dysfunctional social complexes.

I think it may be time to coin new words.

Just some thoughts from a man, who interrupted his day to write this, so guess that makes it a manteruption?

I’m greatly offended by Time and those eternal malcontents!

That, or he’s a new product form Apple, joining the iphone, ipad, ipod…

The funniest aspect of manterruptions is I have never witnessed a conversation between 3 or more women in which each woman didn’t talk over the other 2 and often with at least 2 simultaneous conversations being conducted.

Have you noticed how many times it is on-purpose, to shut others up – and keep others out of the conversation?

It is a power play used by women to dominate.

I’ve never ever seen that tactic used my men.

Modern American Feminism has eaten itself into oblivious meaningless. Manterruptions being the latest, silliest symptom of their irrelevancy.

That power play action is nothing more than GANG BULLYING!

Just watch about five minutes of The View, and it all comes clear.

There’s now an entire industry of pseudo-psychobabblers inventing new words and new ways to repackage the Golden Rule. Do you really need to know more than, “do unto others as you would have them do unto you” to be a good person?

Judd Reinhold has good advice about the Golden Rule:

Shorter Rad Fem: Women are too delicate to be in the workplace.

What gets me is that no matter how egregious the actions of some man, according to the feminists, they’re always getting praise for it. Or at least no one criticizes them for those actions.

What a load of bull hockey.

I’ve had some whiny, bossy, totally over their head in trouble bosses and just because they were male didn’t get them a pass with me.

Same way with kanye or any other self important narcissist butting in where they don’t belong.

It’s only in these women’s minds that men are never criticized or punished for their stupidity.

Happens all the time. Maybe the women don’t see it because they’re too busy being offended over some meaningless slight that they blown out of proportion.

Too many women try to act how they THINK men act when put in charge. They speak loudly, refuse advice and generally act like assholes. I’ve known male bosses like that and they don’t last too long either. No one wants to work in that sort of atmosphere so people leave the company or leave the department or complain until the problem gets solved.

For supposedly being so connected and conscious of others feelings and intuitive, women can be complete block heads.

Why do these :::Cough Cough:::: feminists remind me of
Al Sharpton?

“They speak loudly, refuse advice and generally act like assholes. I’ve known male bosses like that and they don’t last too long either.”

Wrong – they get promoted to C-level.

Settle down folks. It’ll be something else next week. Gotta keep that pot stirred.

What’s next? Microaggressions? Jeez, just let’s get on with it and do something!

Ah sucks, just her the key to the men’s room. And, we’ll use her’s.

I hear they have drugs these days that will clear that up for you.

‘Microaggression’ is so 2014. All the cool kids will be going with nanoaggression next.

And here I thought manterruption was coitus interruptus. Silly me. I can’t get no semantic satisfaction.

(I let men interrupt me all the time and I interrupt them just as much-to gain information. It is part of normal conversation and not a power struggle.)

Now Henry, go to your corner.

I will go to my corner if you come with me and sing bawdy sailing songs.

Only if can do Madeline Kahn’s version of “I’m Tired.”
http://youtu.be/Uai7M4RpoLU

A hint for those silly twits: Do your job and stop expecting applause every time you open your mouth. It’s worked well for me the last 30 years.

At my office, its usually, mancantgetfuckingwordinedgewise with some of these women.

Wow. “Manterruptions.” Who knew? What a load of crap, as anybody who works in the modern office environment can tell you. I have women working with me, for me and supervising me. None of them feel “stifled.”

I’m sorry, but I just couldn’t make it through the entire post. I cannot believe that Ms. Kaye wrote this:

“unless of course you’re a woman, then know that you deserve to be treated differently because you have ovaries.”

Obviously, Ms. Kaye has not been paying attention. How dare she define “woman” as body parts? Does she not realize that some poor womyms were born with other parts (Hel-LO-Bruce Jenner ring any bells??)? Clearly, she needs to shipped off to diversity/sensitivity/tolerance/vocabulary training. Jeez.

(And this is why I shouldn’t sit at the computer with my FIRST cup of coffee.)

She was speaking sarcastically, which often doesn’t translate to every reader due the limits of the written word.

It occurs to me you may be doing the same, lol.

Femterrupting: Unnecessary interruption of a man’s life by a brainless feminist.

Women do the same thing, we’re just a little cagier about it. Instead of trying to wrestle attention in the room to ourselves, we go individually to the boss and man-ipulate (snark) the situation behind the curtain. Which is worse? Usually, though, our victims are other women. That’s why I left corporate culture and went to work for a small business where I was the only woman. Worked out well for me. Now, I’m the boss. 🙂

Wow, the progs have managed to top themselves in the idiocy contest once again. I thought the “man-spreading” meme from a few weeks ago was the dumbest thing I’d ever heard, but this one takes the cake.

I just got off a crowded elevator, where do I file a complaint for boob-stabbing?

Yeah, I’m gonna need the address of that building to, um, investigate.

(Where is this again?)

I spent the first half of my career working for state or county government mental health/substance abuse agencies where the staff is, ohhhhhh, 95% female and 99% liberal.

Woman, I heard it all.

Clerical types are the worst. They never STFU. NEVER.

All real women have XX chromosomes. Jenner is a man disguised as a women.