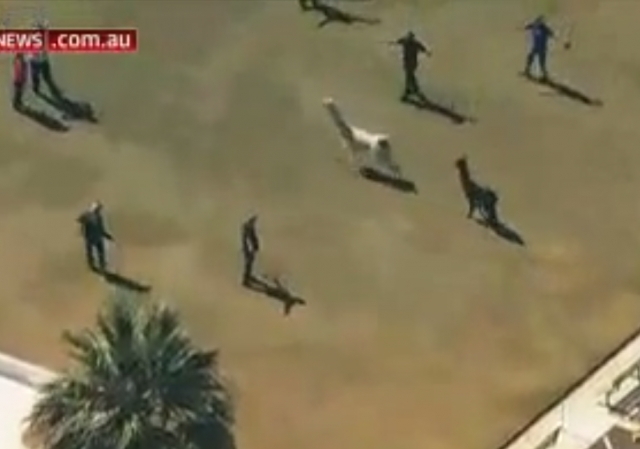 According to Fox News:

Police and residents alike swarmed the black and white llamas in an attempt to capture the two outlaws, who ran through the streets from their attempted captors.

The llama drama came to an end after the partners-in-crime were lassoed and caught.

Who among us hasn’t wanted to escape and evade authorities until being lassoed?

I thought Sun City was a retirement community. Wonder if that is where Llamas go when they retire?

(Side note: I really want a llama. They make excellent guardian animals. And they’re really cute!)

No, you don’t. They are nasty and will spit all over you.

How do they pat them and shape them into patties with their little hooves?

It is a retirement community and I was driving through Sun City today as this was happening!

Betcha you are glad you didn’t get a flat on the journey, or else you would have to retire too.

Is this a publicity stunt for Goat Simulator II?

We have llamas in the wild in the coastal plains of North Carolina, but ours are no ordinary llamas. They are venomous and hunt their prey in packs in the dark hours just after sunset, typically bedded deer, small bears, and humans. We have a bounty on them, $50 for a male, $250 for a female, but it has not helped. Who would risk such a horrible death for $250?

A white one and a black one. Guess which one gets into Harvard.

Both. One will get in on the strength of SAT scores, and the other will get in based on ethnicity.

The llamas are a member of the biological family ‘Camelidae.’ Camelidae can be recognized by their hooves and ankles:
http://en.wikipedia.org/wiki/File:Camelsfootforexceedinglyimportantarticle.jpg

Drama? Looked more like a comedy to me. Of course most of us go through our entire careers without an opportunity to use a phrase like llama drama, so I suppose a bit of hyperbole is only to be expected.

Every day, not everyday. Everyday is an adjective.

Thanks for the laugh, Kemberlee. I needed that.