Lindsey Graham not pleased with release of Gitmo prisoners

Lindsey Graham not pleased with release of Gitmo prisoners

“Strength and Security,” and harsh words for Obama? Must be primary season. 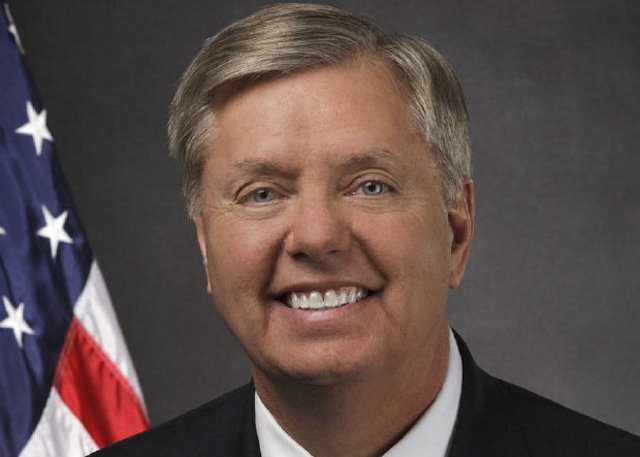 Senator Lindsey Graham (R-SC) came out of nowhere last week with the announcement that he’s formed a presidential exploratory committee. Dubbed “Security Through Strength,” the committee will allow Graham to “test the waters” in an already crowded presidential primary field

“I’m going to take a look at the presidential primary on the Republican side. We’ll have an organization up and running today,” Graham told Fox News. “This organization will allow people to donate money and their time and resources to see if there is a pathway forward for me.”

“The committee will fund the infrastructure and operations allowing Graham to travel the country, listen to Americans, and gauge support for a potential presidential candidacy,” reads a description on the organization’s website.

Graham has previously indicated his interested in a presidential run and announced several weeks ago that he intended to launch a formal committee. His most vocal backer has been Sen. John McCain (R-Ariz.), a close friend who has openly encouraged him to make a bid.

However you may feel about Senator Graham threatening us with a presidential run, he’s at least living up to the name of his committee by hawking out on issues relating to national security. In a recent interview on the Mike Gallagher Show, Graham lashed out against the Administration’s decision to release Gitmo prisoners, and gave us a teaser of what wartime under President Graham might look like.

You can listen to the interview here, via Mediaite.

Appearing on The Mike Gallagher Show on Monday, the possible presidential candidate…said he wouldn’t release Gitmo prisoners back to the Taliban, even if it freed up a Medal of Honor recipient.

The comments referred to how, in May 2014, the Obama administration freed five Taliban members detained at Gitmo in exchange for the release of Sgt. Bowe Bergdahl, who has repeatedly been accused of deserting his post and causing his own capture.

“I would not have done this swap for a Medal of Honor winner,” Graham pointedly said. “The end-of-hostilities argument doesn’t make sense here,” he added, referring to the administration’s claims that the war against Taliban forces has ended.

“The war is not over,” Graham repeatedly said.

I’m going to come out and shock the world by saying that I’m skeptical about this presidential run. The field is already so crowded, and I’m not seeing a distinctive hook that will set Graham apart from the pack. That being said, I think someone willing to be hawkish and outspoken about the Administration’s terrible foreign policy is going to be an incredible asset as we move closer to Decision 2016 (Republican edition.) These issues need to be talked about, and too often, candidates sidestep them in favor of hitting topics that lie closer to home.

If Graham gets both voters and candidates talking about the complete 180 our next president needs to pull when it comes to foreign policy, I think I’ll allow him a small chunk of the limelight.

A nice distraction from his saying he had no problem with Lynch being for partial birth abortion. He said he would vote to confirm her for A.G.

This man is hardworking, well-prepared, and a well-aimed thorn in the present administration’s side. That’s why somebody is always complaining that he is not pure enough for them.

Valerie,
The only side this bum has proved himself to be a thorn is, is the side of the right. Goober here is the RINOs’ RINO.

Gee, he’d score better if he began wearing dresses. He could become the poster child for “leaving the hot pants to hillary.”

Hey, if men don’t’ want to have abortions, they don’t have to have them.

Having babies isn’t the sport it used to be, when the only thing open to Catholic women was to have hysterectomies. They were about 32 years old. And, given their church rules, they couldn’t figure out how to stop having children!

Today we know people stop before they need a station wagon to cart all their kids around. (That’s how Detroit thought up those station wagons back in the 1950’s.)

So you’re in favor of making it illegal to abort male babies?

Personally I think it’s a tragic way to end a life, regardless of gender.

Imagine having your child’s life snuffed out and having no say in the matter.

Learn to read, Paul. I said MEN can have all the abortions they want, because only women get to need them.

The good news is that today we have many forms of birth control. (There’s no need to wash out condoms for re-use, if you’re too poor to afford buying them in bulk.)

Nature, by the way, is the biggest abortionist. Sometimes? The fertilized egg doesn’t make it to a safe spot. Ectopic pregnancies end in disaster, because there’s no place for the growing fetus to expand. Ditto, mishaps when the egg lands at the bottom of the uterus. And, hemorrhaging happens.

The “window of opportunity” lasts about 12 hours. Okay. Maybe, a little more. Most sexual activity doesn’t lead to pregnancies. (However, before birth control, some women wouldn’t have intercourse mid-point during their cycles.) Wasn’t as effective as all the methods available today.

And, so you notice in all first world countries, the size of families have shrunk. Why? It seems when it comes to choice lots of people say “no.”

Also, in very poor countries, it turns out when a TV set is added to the home, the frequencies of pregnancies drops.

But, again, ALL MEN are welcome to shoving a coat hanger up their penises, to stop pregnancies they don’t want.

Heck, there were times women threw themselves down staircases, due to the unavailability of abortions.

Even better. There is no medical term “miscarriage.” That’s why doctors don’t want women to read their medical charts. The loss of a pregnancy is listed as an abortion.

Graham is putting out a line of his availability for Vice President, methinks.

And as Miller notes, he can bring the heat on the foreign policy blunders which have typified the Obama years. But he’s an example of never-gonna-be-a-contender candidates who can get in our race with a declaration and earn the free TV time from participating in nine-way “debates” to raise their profiles for VP stock or a book tour to follow, clogging up the process.

Debates need to be limited to those who can demonstrate some support, either by raising a certain minimal amount of money and/or earning a minimal poll standing in several polls, say 5%.

— And moderated by, well, at least a moderate, not a corrupt leftist cow like Candy Crowley.

It’s still hard to fathom how the Romney camp was that lame.

TFR: Corrupt leftist cow? I thought you were describing Hillary….

I just had a horrible thought: Bush/Graham. Shudder. I may never sleep again.

that sounds like an adverse side effect of eating crackers in bed, not a presidential ticket. either way, no thanks.

Since I moved to SC 15 months ago, Lindsay Graham is now one of my Senators. I didn’t vote for him in the primary, nor did I vote for him in the general election. He was elected by establishment Republicans, as no thinking conservative would vote for him. Unfortunately he had built up such a huge war chest prior to the campaign that he was easily elected with his advertisements pretending to be a conservative. He seldom has an original thought, and as someone said, he’s McCain’s puppet. I wish we could get another Tim Scott or someone like Senator Jeff Sessions of AL.

Remember how he got the nickname Grahamnesty?

Plus Grahamn was the only Republican on the Senate Judiciary Committee to vote for Elena Kagan for the Supreme Court.

Sided with Democrats on government regulation to combat “climate change”

Supported abridging the First Amendment for those who criticize the government

Supported restrictions on the Second Amendment