Headlights kicked out of one student’s Mercedes 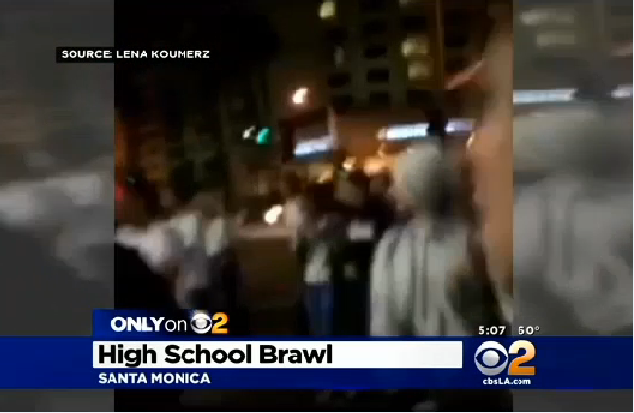 What is going on in the Left Coast?

Reader and frequent commenter LukeHandCool, a resident of Santa Monica, sends along this note and link:

What happens when the blackboard jungle comes to two of the most progressive high schools in America?

How could this possibly happen in Utopia when all the kids are taught they are unbelievably special just for breathing?

I’ll tell you what happens. You get long, long hand-wringing emails from the principal on an almost daily basis.

Video of a nasty fight between rival high schools last month — touched off by basketball games — has now emerged….

On the video, CBS2’s Greg Mills reports “there are lots of punches thrown, angry words.”

As is the usual custom, most of the cars parked were at 4th Street, at the Santa Monica Civic Center. As students walked to their cars, angry words were exchanged.

“I heard there was a big fight, things just got out of hand,” says Santa Monica High student Ronnie Cornelius. He wrestles for the school — didn’t attend the game — but told Mills “everyone” was talking about it.

Price has covered the rivalry for his school newspaper for four years but said it was nothing as intense as it was on the night of Jan. 23.
“It quickly escalated,” said Price, “they followed this kid to his Mercedes. They proceeded to kick in his headlights and key his car and jump on top of his roof.”

Things sure have changed in 90210 since the good old days.

In 2005 a huge fight between black and Hispanic students at Samohi erupted.

Administrators could not break up the fights and students watching, as well as those fighting, refused to disperse and go to their next class.

The school went on lockdown and SMPD was called. SMPD ended up requesting, and getting, back up from Beverly Hills P.D. and Culver City P.D.!!

This was just before our daughter was to attend Samohi. Talking to our dentist (a nice, but dyed-in-the-wool liberal Japanese American lady) whose daughter was then a junior at Samo, about the incident, when I expressed reservations about our daughter attending because of the huge brawl, she poo-pooed my concerns. She then said her own daughter knew which areas of the school to avoid!

Doesn’t that sound progressively great! As long as you don’t dare venture into these areas of the campus, you’ll be just fine! Sounds like Utopia!

For those who might wonder just how progressive Samohi is, Larry Elder had a conservative student named Stephen Miller repeatedly on his radio show to tell of his battles with the progressive teachers and administrators. He also battled to get permission to have Larry Elder and David Horowitz speak on campus after hordes of progressive speakers were always okey-dokey, no problem.

“How I Changed My Left-Wing High School.”

A story of two lovers forced apart by vicious gang warfare between Santa Monica High and Beverly Hill’s High played out on the streets of Venice ( not Italy ).

Starring: The granddaughter of Natalie Wood as Maria, grandson of George Chakiris as Bernardo, and great grandson of Richard Beymer as Tony

Speaking of transgenders, Bruce Jenner just caused a fatal accident on Pacific Coast Highway yesterday. He rear ended a car forcing it into oncoming traffic. The woman he rear ended was killed.

I walked over the bridge that spans Pacific Coast Highway to Santa Monica Beach with the Professor and the lovely Mrs. Jacobson.

I vaguely remember the Professor commenting on similarities between the bridge and the one that Vox’s Zack Beauchamp said joins Gaza to the West Bank.

I hope I misremembered that.

Anyway, shame on TMZ and others for their boring headlines.

My headline would have been:

P.S. To all my transgendered friends:

I just want to assure you that I don’t condone what I just said.

No worries – they’ll likely misremember it.

I am originally a central coaster and CA native.

My experience of a train wreck in SoCal was driving thru L.A. to a business conference in Palm Springs the day O.J. went on his infamous run from the law.

It was all KNX talked about.

Yeah, that part of SoCal, Beverly Hills and Santa Monica, is a whole different world.

Can’t complain though. I married a gorgeous conservative Orange County lady who is the sun in my domestic universe.

Yep. Orange County is one of SoCal’s conservatives’ last stands.

“A woman driving northbound in a Toyota Prius slowed down or stopped for reasons that were unclear. An elderly woman driving a Lexus sedan rear-ended the Prius.

Jenner, who was driving a black Cadillac Escalade sport utility vehicle that was hauling a trailer carrying an off-road vehicle, then rear-ended the Lexus.

The impact propelled the Lexus into oncoming traffic, where a Hummer traveling southbound slammed into the Lexus. The driver of the Lexus, whom authorities declined to identify, died at the scene. Both the front and rear ends of the Lexus were severely damaged.”

If Jenner was on a cell phone prior to the crash he will have problems. But there’s no indication of that yet.

I think the point that needs to be made rather than dwelling on the unfortunate accident that Jenner happened to be a part off is that even after transitioning, Jenner will still have more balls than Obama.

Regardless of the how the person was driving in the Prius, Jenner was not traveling at a safe distance to avoid an emergency situation such as this.

In 2005 a huge fight between black and Hispanic students at Samohi erupted.

Well, I am sure it was because of George W. Bush. Or the Iraq War. Or global warming. Or micro-aggression. Whatever.

As a friend said to me,

Rest assured they instituted new classes for the students to explore and embrace their diversity and multiculturalism after the 2005 fiasco.

Our son is now trying to survive a ridiculous freshman seminar at Samohi that resulted from all this … and which will no doubt make it worse.

Why do you send him there? I am genuinely curious; the negatives are obvious (given the original post), but what are the positives?

A number of reasons.

1) His best friends are all there. He’d be miserable at a school without his buddies.

2) We really can’t afford sending him to a private school.

3) We did end up sending our daughter to a private girls Catholic school her first two years. She was the only non-Catholic accepted in her class. I think it was a good experience for her (I never had any exposure to religion growing up, and I wanted her to have the opportunity). But it was expensive, and almost all the other girls had been in school together since kindergarten and cliques had been established. Our daughter hated all the mean-girl inter-clique catty fighting and backstabbing. She was always in the middle caught in the crossfire.

4) So far our son is fine with things there. He’s in honors classes and will take AP classes. The only thing he grumbles about is the politically correct freshman seminar class I mentioned previously.

Also, our daughter has told him which teachers to avoid at all costs. One government teacher, whom Larry Elder and Stephen Miller had trouble with, is an absolute leftist fanatic. Our daughter ended up in her class and transferred to another class after that teacher spent the entire first day of the new semester railing against Republicans and conservatives.

“She’s nuts,” our daughter said. When I suggested to our daughter that she start a Young Republicans Club on campus, she looked at me and said, “Daddy, this is Santa Monica. Do I look like I have a death wish to you?”

She did have one history teacher whom she loved, a young Hispanic man, who did not hide the fact that he was a conservative Republican, but, as my daughter said, he never injected his politics into his teaching.

We’ll try with everything in our power to see that our son gets into his class.

Is home-schooling out of the question?

What about private school?

I hear Pepperdine is nice…

I mentioned home schooling once to my wife years ago and the response was, “Are you stupid?”

Of course, she asks me that several times a day.

My wife isn’t a native English speaker and, even if she were, does not have the patience.

My niece was home schooling her autistic son for almost a year. The stress of that (and she works part-time) was so obvious whenever I saw her. She looked so worn out.

He was in an elementary school here in Santa Monica but she pulled him out when she saw some of the boys pushing him around, and his teacher was very unsympathetic to his struggle.

She finally hired a lawyer and sat down with a few of the big shots at the school and, lo and behold, they made things right. He now has a wonderful special-ed teacher and a loving aide. My sister said they are just wonderful, nurturing people.

He’s living in his own world a lot of the time but you can tell he’s brilliant in some ways. My niece took him to UCLA and they tested him. My sister told me my niece said he could answer the spatial reasoning question before she could … and my niece was quite the math wiz.

So it’s great that he might be able to reach his potential. It’s just sad that the school was very uncooperative and gave my niece the run around until she hired a lawyer. I guess lawyers can do some good things at times 🙂

Luke, the fact that your wife isn’t a native English speaker is the very best reason IN FAVOR of home schooling! I assume she knew some other language that she could have taught your children. If they live in the US, they would have learned English no matter what, and I hope you didn’t pass up a golden opportunity for them to be fully bilingual.

Our oldest daughter is fluent in Japanese and is leaving this spring to spend a year studying urban design in grad school in Japan.