Just in time for Valentine’s Day, a statuette of Putin on a bear

Just in time for Valentine’s Day, a statuette of Putin on a bear

Nothing says “I love you” like a mad dictator-themed gift! 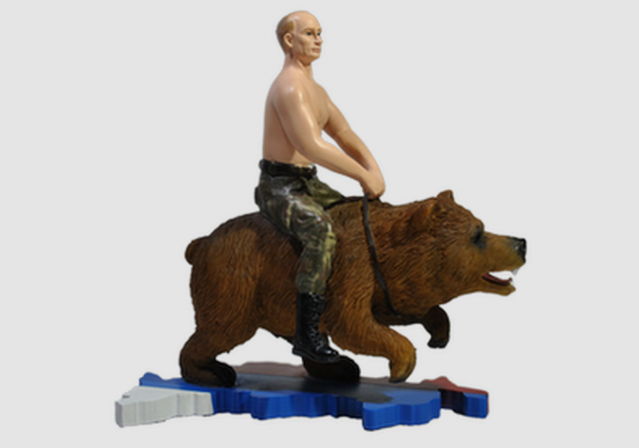 For a mere 2500 rubles, you can give your Valentine a gift they’ll never forget: their very own figurine of Vladimir Putin riding a bear.

Who wouldn’t want that? 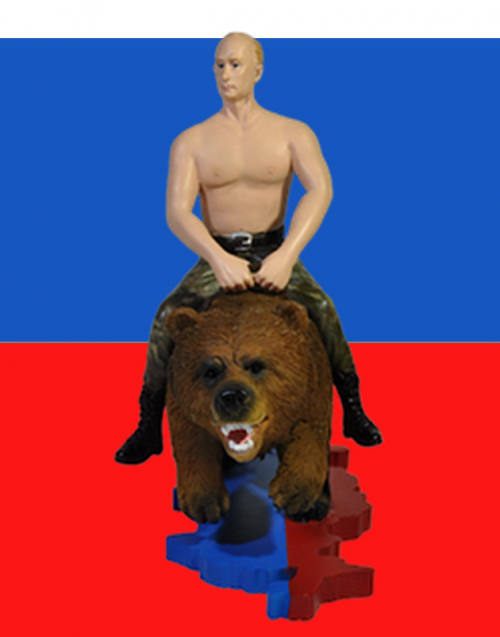 Luxurious Figurine as the head of state who tamed forest brown bear standing on a segment of a great country, symbolizes the victory, the heroic strength and power. Bear has long been considered a symbol of immense Russia, represents courage, strength, courage and rage directed against enemies – this beast could not be better reflects the position of the nation and its principles.

Perfectly executed souvenir – a symbol of Russian fatalism, a symbol of the Russian people, walking through history has always fiercely, bravely, boldly and steadfastly. Statuette reflects the political position of the country, emphasizes its prowess, demonstrating courage of the Russian people, his heroism, rage and desire for achievements, for the protection of its own territory. Sold the original statue in a presentable box inscribed with the colors of the Russian flag and the phrase, President Putin said on one of the forums.

Souvenir is the exclusive, can act as a present a wonderful public servant, military, historians, politicians, boss, collector, patriot of his country, or any strong-willed, imperious and rebellious man who knows how to achieve your goals. This representative will be proud to take the statuette from you on a regular holiday every person from your environment. It not only decorate the interior of your home or office, stately be placed on the table, but will be the subject of conversations and arguments in your circle of friends, which further unify and strengthen your company.

I know plenty of imperiously-minded people who would be incredibly appreciative to receive a gift that embodies the essence of…rage directed at your enemies?

Of course, one can never have too much Putin-themed memorabilia. For the Valentine’s Day high roller, there’s always this 1/6 scale replica of Mr. Putin for sale on Amazon. Priced at a paltry $278.50, this Putin is sure to please. Sadly, it’s not available on Amazon Prime: 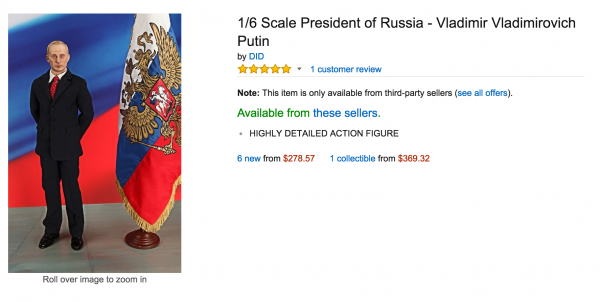 You’ll be happy to know it comes highly recommended by previous purchasers: 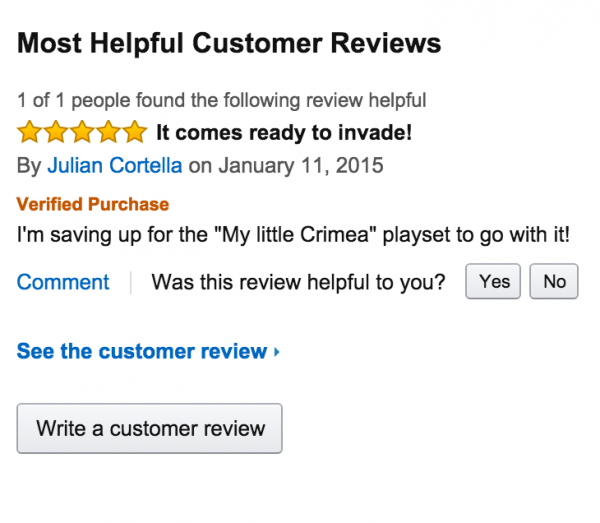 But if that doesn’t suit your love, or if they were really hoping for a more statesmanlike representation of Dear Leader, why not spring for a Putin Cardboard Cutout? 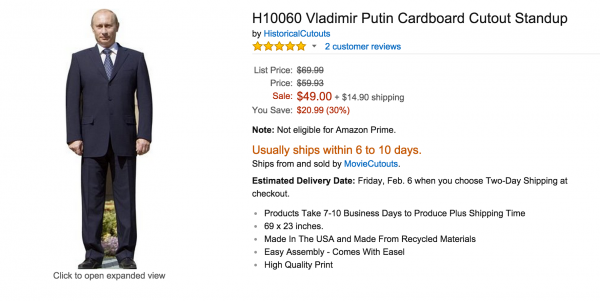 I was really hoping for a figurine of Putin hugging a polar bear; but I guess I’ll just have to wait until next year.

Actually, I’d rather have a figurine depicting Putin after he hugged the polar bear. Oh, and a similar one of Al Gore.

Just so you are not bored Henry we are sending you a Fifty Shades of Grey Vermont Teddy Bear for Valentines Day and the Encyclopedia Britannica.

Awesome, I’ll put it next to my Barack Obama chia pet.

They’ll have to pay ME to take it.

This is sold to tourist at Sheremetievo airport, tough. Obviously tongue-in-cheek.

I think you got it right the first time…

So, do they have one of the lightbringer on a unicorn?

In his mom jeans?

I’ll put it next to my figurine of Barack riding a girl’s bicycle and helmet.

I’ll put next to my figurine of Barack standing of one leg lifting his golf club up high.

Aww come on now, Vlads got hair on his chest they couldn’t even get that detail right, geez.

Trust me; this is the perfect gift for the conservative male in your life.