And bless his heart for that 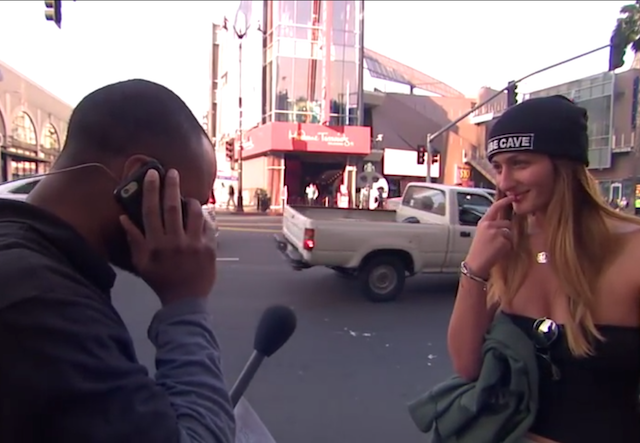 The race relations debate in America has become a caricature of its former self. What was once a serious conversation about ending discrimination and hatred has become a three ring circus of hand-wringing and recriminations over whose office, TV show, or university has the largest representation of minority members.

It’s not a question of sharing cultural elements, or learning a new language; all that really matters to the race relations brigade these days comes down to hard numbers—how many of you are there?—and regular reminders about the dangers of “cultural appropriation,” making it nearly impossible for America to enjoy its status as a world class melting pot.

This is why I fully endorse any and all attempts to lampoon the Very Important Concerns© of those who make it their mission in life to question my commitment to love and equality.

In his latest edition of “Pedestrian Questions,” comedian Jimmy Kimmel did just that—and managed to make his own point about race relations in America (even if it happened by accident.)

Shock! Awe! The Week called it “an interesting, if somewhat quixotic and cringe-inducing, way to look at race relations in America.”

What I noticed, though, is the only people cringing were the people being asked how many black friends they could conjure up at any given moment.

I think this is really where America is at: Why is this person asking me if I have black friends? When is the last time I took inventory of the various skin colors on my Facebook timeline? When I tested myself with this question, I was able to create a list of black friends…and Asian friends…and latino and Jewish friends…but it felt weird to do so. I couldn’t remember the last time I tried to do a demographic breakdown of the contacts in my phone.

It didn’t just feel stupid. It felt wrong. Why would I reduce my friends to columns on some sort of politically correct spreadsheet? They’re humans.

Jimmy’s audience laughed along with the bit, and I think it’s because they recognized that. Maybe this is what real progress looks like—getting to the point where it feels completely ridiculous to take inventory of our friends, lest we get caught with a group a little too white for the tastes of the average racially-minded talking head.

What exactly is a “Babe Cave?”

The empty space underneath her cap.

Unless its already taken, it will be the name of my new strip club, lol.

Well, I can only tell you where my mind went…

This will continue until people quit consuming the opiates consisting of promises of dissociation of risk and instant or immediate gratification. It will not change until people stop blindly following the secular profits of wealth, pleasure, and leisure. There will be severe withdrawal symptoms (e.g. children), but it will be worse if we continue to corrupt our minds with fantasies (e.g. printed wealth) and fairy tales (e.g. spontaneous conception or stork’s delivery).

Wow who put a nickel in you?

Unfortunately, I didn’t see it the same way as you did. I saw this bit as targeting white people (with one black male) to point out their prejudice, as average people being judged by their skin color, and their age.

The older the person, the less likely the audience thought the person had a “black friend.” Especially the male. Kimmel even said that the one person was LYING.

With the younger girls, the answer was almost unanimous from the audience – yes, they did. When the black guy was asked if he had a white friend – and he said “no,” people LAUGHED when he said, “…white people scary….” which would be considered VERY racist if a white person had said that about a black person. Oh, yeah. Rev. Al, Jesse, the works!

Didn’t we just go through weeks of being excoriated because Trayvon Martin was killed – only guilty of being a young “scary” black male? And haven’t we just spent months being beaten verbally by the media and leftists because cops are supposedly assuming that all black males are guilty, targets, simply for “walking while black”? Wasn’t Juan Williams fired from NPR because he admitted that he felt scared when he’s on a plane with someone who is Muslim (and immediately said that was wrong, and he knew it was prejudice that he was ashamed of)?

This is really sad. But I don’t think the audience got how sad. At least, not from what I saw.

JackRussellTerrierist in reply to DINORightMarie. | February 5, 2015 at 4:05 am

Someone should have asked the interviewer, “No. I don’t have a black friend. Do I need one?”

If you need a black friend, the government will issue one to you. Complete with instructions for all types of interactions and obeisances.

Well, that sort of leads to what the next question would be should the answer have been “Yes.” “Does it come equipped with its own food, shelter, clothing, rimz, Escalade, cell phone and EBT card, or am I supposed to pay for all that…..again?”

You will pay for all of that AGAIN. And because you were uppity enough to ask that question, you will be forced to take reeducation classes, which include excrutiatingly detailed training in bowing and scraping, walking on eggs, and holding your tongue you h8er you.

I can’t believe that I just watched that. I figured that, if the clip were posted here at LI, it must be of some value. Stupid me.

I guess this is another one of those “get with the culture” posts. Um, no thank you. I agree with the poster above; this is just another cheap “aren’t white people all stupid and racist” media stunt. Bleh.

It’s the TMZ-ification of LI. Yesterday it was J-Lo.

I think that DINORightMarie’s analysis is probably more apt; however, that doesn’t mean the bit isn’t worth pondering. After all, Holder and Obama are heading up a push to ensure that black people are equally represented on police forces (and among other first responders) and even in those being suspended from K-12.

The point is that we should be embarrassed and ashamed not to have the same number of black friends as we have of white friends. It’s bizarre and strange as you note . . . but not to them. Never mind that blacks make up only 14% of the population, either, because that is not relevant to them in any of their “courageous” discussions about race in America.