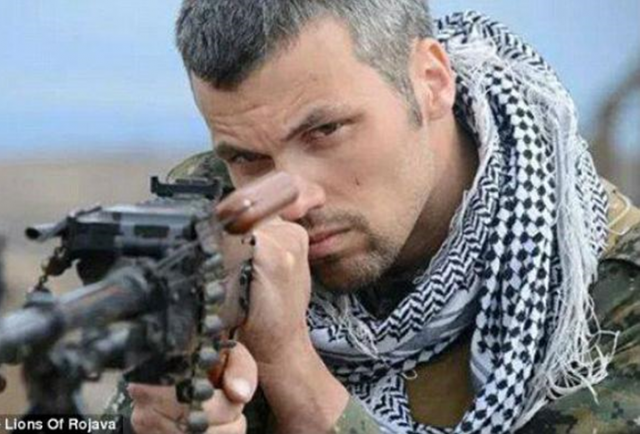 In the wake of Egypt striking ISIS targets in Libya, Pope Francis issued a somber statement regarding the death of 21 fellow Christians.

“They were murdered just for the fact they were Christians,” Pope Francis said.

“The blood of our Christian brothers is a witness that cries out,” said the Pope. “If they are Catholic, Orthodox, Copts, Lutherans, it is not important: They are Christians. The blood is the same: It is the blood which confesses Christ.”

Pope Francis said that in remembering “these brothers who have been killed simply for confessing Christ,” Christians should encourage one another in the ecumenical goal, noting the “ecumenism of blood.”

Scalia then lists the name of the 21 slaughtered Copts, and asks these new martyrs for their prayers. If ISIS has its way, Pope Francis will be joining those sacrificed: “And we will conquer Rome, by Allah’s permission, the promise of our Prophet, peace be upon him,” stated one of the butchers.

This regional map shows the location in of Sirte (the ISIS stronghold where those Egyptians were held captive) and Rome (and Vatican City that is enclaved within its boundaries). The terror group is now knocking on the doors of Europe…and its stated target is due north and not terribly distant. 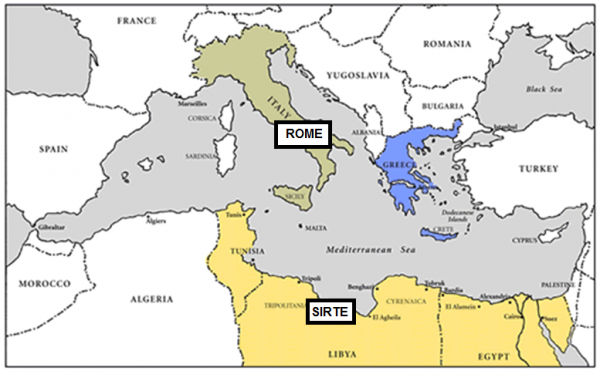 So it is no wonder Egyptian and Italian leaders are pondering an Italian-led regional coalition as a solution:

…Italian Minister of Defence Roberta Pinotti stated in an interview Sunday with Il Messaggero newspaper that Italy is ready to lead a coalition to interfere in Libya with coordination of concerned regional countries in Europe and North Africa.

Last November, Al-Sisi had discussed with Italian officials a common desire to take part in the international alliances, grouped under the UN, to maintain international peace and stability in the Middle East. He urged an enhanced role by the European Union and the Arab League.

Relying on Italy might be a wise option, as it looks like Obama was golfing as the latest terror incident was being revealed. But, hey — at least there are no selfies. Additionally, about one-quarter of the world’s Catholics reside in Europe, and Italy is home to the Catholic “Mecca”, so the Islamic monsters have given Europeans even more reason for engagement.

Pope Francis will never call for a Crusade, as the Catholic Church has clearly evolved beyond the Middle Ages. However, Western Christian faithful, Catholic and otherwise, have been steadily joining the Kurds, Iraqi Christian warbands, and other ISIS opposition groups. Their goal is to simply stop the torture and brutality being perpetrated in the name of God.

The Marine Corps Times has these details on one of the volunteers:

As Kurdish fighters gathered around a fire in this damp, frigid mountain town in northwestern Iraq, exhausted from battling the Islamic State group, a surprising recruit wearing a tactical vest with the words “Christ is Lord” scribbled on it joined them.

The fighter, with a sniper rifle slung over his shoulder and Rambo-styled bandanna around his head, is 28-year-old Jordan Matson from Sturtevant, Wisconsin, a former U.S. Army soldier who joined the Kurds to fight the extremist group now holding a third of Iraq and neighboring Syria.

“I’m not going back until the fight is finished and ISIS is crippled,” Matson told The Associated Press, using an alternate acronym for the militant group. “I decided that if my government wasn’t going to do anything to help this country, especially Kurdish people who stood by us for 10 years and helped us out while we were in this country, then I was going to do something.”

Matson fights with The Lions of Rojava, who battle ISIS insurgents in Syria. 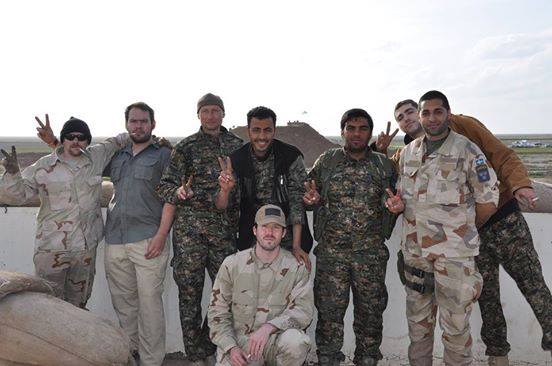 Another warrior is Catholic:

Saint Michael, the archangel of battle, is tattooed across the back of a U.S. army veteran who recently returned to Iraq and joined a Christian militia fighting Islamic State in what he sees as a biblical war between good and evil.

Brett, 28, carries the same thumb-worn pocket Bible he did whilst deployed to Iraq in 2006 – a picture of the Virgin Mary tucked inside its pages and his favorite verses highlighted.

“It’s very different,” he said, asked how the experiences compared. “Here I’m fighting for a people and for a faith, and the enemy is much bigger and more brutal.”

The last count had 150 Americans fighting alongside ISIS. They will soon be facing some of their fellow citizens if they remain — the difference being that Matson, Brett and their comrades have extensive military training and are used to hard conditions.

Prediction: Many of America’s ISIS fighters will soon be fleeing back here.

Some less-than-informed progressives are mistaking these Christians as cross-bearing crusaders for the new millennium. Via Twitchy comes this gem of inanity from Vox contributor Max Fisher:

I am sure Matson, Brett and all the highly skilled Western warriors who now fight alongside Kurds and Iraqi Christians welcome the recent military actions of two Muslim leaders: Jordan’s King Abdullah and Egypt’s Abdel Fattah al-Sisi. Perhaps Fisher needs the vast differences between the two types of fighters explained? Western Christian warriors are targeting terrorists and won’t impose their faith on others; ISIS and its ilk are vile hordes who brutalize the innocent.

I will include the safety of these brave men, and the protection of the Pope, in my prayers tonight; I’ll also pray for divine justice, and that Fisher learns a little bit more about religious tolerance before tweeting.

“In the wake of Egypt striking ISIS targets in Libya, Pope John Francis issued a somber statement regarding the death of 21 fellow Christians.”

Who the F is “Pope John Francis?”

Yes! My son and I had just been discussing what Pope John Paul might be doing differently vs Pope Francis..if anything.

I figured. On an unrelated (pun!) note, my last name is also Eastman. My clan is mostly in Tenn. these days, but my father grew up in Upstate NY.

Good to meet another Eastman! I love Tennessee..an awesome state.

Who the F wakes up and decides it’s a nice idea to drop the F-bomb on a woman for breakfast because she’s made a simple and fairly common style-guide slip-up like that?

Did you truly not understand to whom she was referring? Child.

So who is paying these guys? CIA?

It’s quite possible that *no-one* is paying them, and that they’re doing this on their own.

So how does that work? First, you would have to purchase an airline ticket to…what…Iraq? I’m thinking maybe $10,000 for that. Then you have to have a place to stay and food to eat. Someone is paying for all that, I’m just wondering who it might be.

So we’re quibbling about air fares now rather than the fundamental issue of who is paying?

Some people believe in something bigger than a paycheck.

Yes. I’m sure the ISIS terrorists all do. Nonetheless, they have to eat, too. Who buys their bullets and RPGs?

It’s usually fellow Christians who chip in to support a brother or sister going overseas to do something in furtherance of their religion and Christian beliefs. This isn’t quite the traditional mission trip, but I expect they have their supporters all the same.

Ace is right, this article is a must read on the Islamic State: http://www.theatlantic.com/features/archive/2015/02/what-isis-really-wants/384980/

Leslie, I will pray with you for the same things. The basic difference between the Judeo-Christian religions and Islam is love vs. hate. Unfortunately, our president just today reaffirmed his views: “No religion is responsible for terrorism.” Are Jews or Christians on a rampage of terrorism, beheading people who won’t convert to their faith? Where is there any terrorism that is not grounded in Islam?

“Western Christian warriors are targeting terrorists and won’t impose their faith on others; ISIS and its ilk are vile hordes who brutalize the innocent.”