“Immunizations have saved not millions but billions of lives”

“Immunizations have saved not millions but billions of lives” 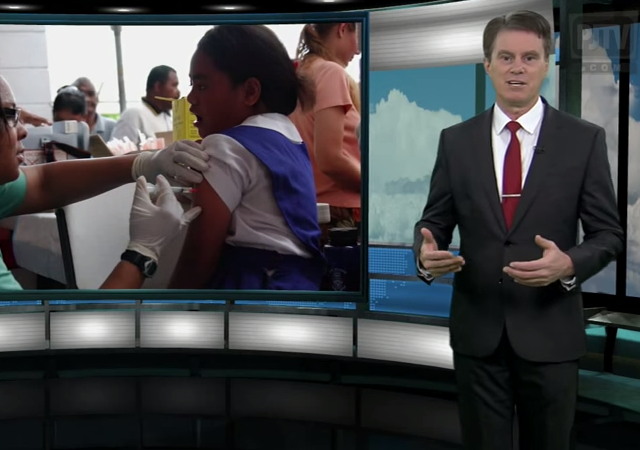 A recent outbreak of Measles at Disneyland is the inspiration for the new edition of Afterburner with Bill Whittle.

After addressing the false, media-stoked idea that Republicans are anti-vaccine and therefore anti-science, Bill explores the subject of progressive parenting. He points out that kids who are brought up in the constant safety of the everyone-gets-a-trophy school of child rearing are more vulnerable to disease not only of body but of mind.

Watching this video reminded me of a very funny story.

In 1999, George Carlin toured a show called You Are All Diseased.

Here’s what he had to say about fear of germs:

When I was a little boy in New York City in the 1940s, we swam in the Hudson River, and it was filled with raw sewage, okay? We swam in raw sewage! You know, to cool off. And at that time, the big fear was polio. Thousands of kids died from polio every year. But you know something? In my neighborhood, no one ever got polio. No one, ever! You know why? ‘Cause we swam in raw sewage! It strengthened our immune systems! The polio never had a prayer. We were tempered in raw shit!

There’s a lot of truth to that, and it dovetails nicely with Whittle’s point.

The bottom line is this: Get your kids immunized, but don’t try to protect them from life.

So much of the folly and phantoms that make up modern Western obsessions would fall away like sleep on waking if we were challenged like our ancestors were.

Can you imagine much of the nonsense that consumes people’s lives passing through that? Can you imagine a gender feminist actually existing? Someone obsessing on gluten? A parent who would not tramp miles to have their child preserved from ever having a particular illness? A working person who frets about someone’s earnings other than his or her own?

So much of the madness that distracts us from reality is only possible as a luxury of our time. It is a perverse legacy left to us by those who sought to make life richer and so much less arduous that their gifts to us make it possible for us to spin a delusion in which to suffer.

Well it would help if Merck and the FDA would allow or require vaccines to be produced without using cells from murdered babies. There was an ethical alternative for Measles vaccine available until 2009, when for reasons unknown, they stopped producing it, and have refused to license other companies to produce it either. Also, the FDA has refused to allow ethically-produced vaccines to be imported. See “Conscientious objection to vaccinations” Feb 3 ,2015, on COGforLife dot org , or “Some Efficacious Vaccines are Produced Unethically” Feb 13, 2015, at Crisis Magazine dot com.

Right now, parents have the choice to partake of “the fruit of the poisoned tree” so to speak, or not to vaccinate. Very poor options, indeed.

There are reasonable voices that aren’t being heard on these issues. It is sobering that none of the major conservative outlets are giving them a strong and regular hearing.

Let’s say one of your loved ones was shot to death in an attempted robbery. Their heart, lungs, eyes or kidney would be a perfect match for the suffering teenager in the next room. Young otherwise-healthy trauma victims are one of the best sources of healthy robust organs going.

If you OK the transplant, are either you or the donor morally complicit in murder or condoning of murder?

For some reason I cannot paste links into the LI comment box using my iPad (works fine on other blogs though), so Google “Proslogion Vaccines Do Not Contain Fetal Tissue” (without the quotes) for one Christian physician’s take on this.

Hi Amy, The only reason the vaccines are not coming from babies murdered by their mothers 10 years ago is because the law has protected unborn babies from being “harvested” for such uses. It is a slippery slope that we should never have gone down.

We live in a society that objects to Starbucks using cochineal bugs to color their strawberry drinks, a society that demands wedding planners cater to the unique moral positions of anyone who requests their services…. but that same society thinks it is “normal” to inject the blood of sacrificed infants into babies without their parents’ knowledge – and actively rejects pleas for an easily available and effective alternative from a kinder, more humane source. An alternative these conscientious objectors are willing to pay for.

Yes, there are extreme ethical and moral issues with organ transplants today that have led me to determine that I would personally decline to be a recipient or donor,and would not consent for a loved one. While the US has not yet devolved to the point where it is considered ok to exploit the poor for their organs, I’ve heard disturbing reports that perhaps decisions about life and death may be influenced by the demand for a particular patient’s organs. I am not willing to support the growth of a culture of desperation, and I am willing to stake my own life on that by declining to benefit from those practices that have become so tainted that the wrongness outweighs any possible benefit. This is another area that, once you start researching it, opens up a nightmare.

My concern was to show that there are positions in this debate that result from true, long-standing ethical and moral stances, positions that until the past 10 years were given due respect even by people who may have felt differently, but in 2015 even the existence of these positions is being denied by both conservative and progressive media.

Good grief. Nobody is “injecting the blood of sacrificed infants” into anybody!

This is why everybody thinks anti-vaxxers are unhinged. Because you are!

I love Bill Whittle. It’s hard to imagine that we’re living in an age where the concept of mens sana in corpore sano has to be introduced to a whole new generation as some kind of novel idea.

I also enjoyed his description of the MSM as “the audio-visual department of the Democrat party”. LOL!

Why are people who immunize their children so worried about kids who aren’t immunized? The unimmunized only present a potential threat to others who are likewise unimmuninzed. Deciding to forgo protection from disease isn’t the same as deciding against treatment once a disease has struck – care is not being withheld. And only the children of other parents who elected against immunization are at risk from each other’s children – and only then if any of them actually contracts a particular disease (in which case standard isolation protocols should be sufficient to contain outbreaks, esp. because so many other children are immunized and aren’t able to promote transmission themselves, helping to break chains of transmission).

I have a problem with government mandated medical procedures. Freedom lovers should respect the choices of those who decline prophylaxis of any kind. Esp. when the prophylaxis is available to those who want it, protecting them from the decisions of others to skip it. An actress has declared that unimmunized children aren’t allowed near her kids. Why? Are her children immunized? If they are, and if the immunizations are effective (they are), what is she worried about?

Immunization isn’t 100% effective, and unimmunized children are walking vectors for disease. They threaten everyone around them.