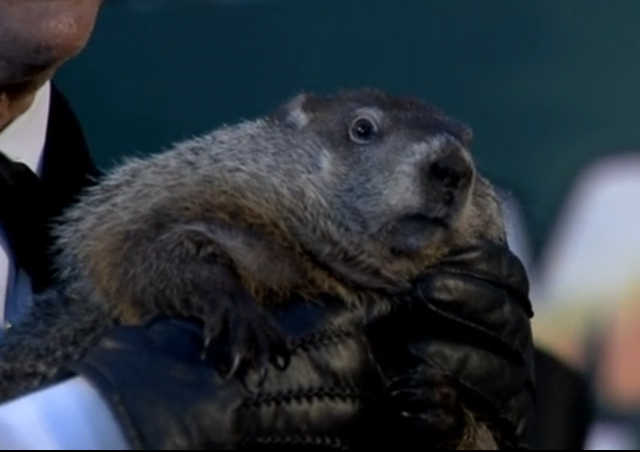 If you were hoping to dust the snow off the lawn chair to start working on your tan, you’re going to have to wait a few weeks, at least according to Punxsutawney Phil.

Phil the groundhog saw his shadow today, so six more weeks of winter it is.

Punxsutawney Phil is no stranger to controversy though. According to the Washington Post:

Last year, Phil also saw his shadow — the final nail in the coffin for what was one of the most brutally long winters in the U.S. The unrelenting winter dragged on through March in many places in 2014. Around D.C., many locations accumulated more than 30 inches of snow last winter, and Phil chalked another one up in the “verified” column.

While no one questions Phil’s dedication to the seasonal outlook, his accuracy is an enduring source of controversy.

In 2013, Phil issued a forecast for an early spring, but bitter cold and snow gripped the eastern U.S. into March that year. The prosecuting attorney in Butler County, Ohio, went as far as to seek the death penalty for Phil for “misrepresentation of early spring” before a Pennsylvania law firm came to Phil’s defense, claiming the Ohio attorney had no jurisdiction to prosecute the groundhog.

Meanwhile in New York, we are happy to report that Mayor de Blasio did not kill a groundhog this year, unlike last year.

Besides, surf will be down too! May your taxes increase beyond all reasonable levels, thanks to your Moonbean! 🙂

Did Doofus manage not to kill another ground hog this year?

Meanwhile, in the end Jimmy gets revenge!
https://www.youtube.com/watch?v=fZdIYAHtYNE

I’ll stick with General Beauregard Lee and his early spring prediction. We’re already ankle deep in mud so we’re off to a good start.

my highest temp yesterday was 3 below zero.
this morning it briefly warmed to 2 below 0 (F of course) at 3am and is now 6 below zero.
I also got 10″ snow yesterday all while temps were 5 below zero.
in 6 days I nave gotten 41 inches.
I am ready for spring.

Come on!! You all know that you continue to have wintry conditions through March.

As I recall my own stay in the USA, I can assure you that the blizzard that I experienced occurred in March. This was in Ohio in 1985. The winter proper did not begin until after Christmas 1984 and then we had the cold including a record low temperature for Fairborn as well as the blizzard in March.

This prediction thing is fun, but reality shows that until there is a swing in the other direction you will have what you consider a longer winter.